Most of us heading to Frederick County or points west travel along Routes 26, 140 or Interstate 70, but few take Rte. 77 through Uniontown, Middleburg, Keymar, and Detour. That’s a bit sad because tiny Detour has an interesting history even if not much is visible today.

Its recent history involves two serious floods-Tropical Storm Agnes in 1972 and Hurricane Eloise in 1975. Pictures in the Carroll County Times showed water on Detour’s Main Street reaching the level of porch roofs. The culprit in both cases was Double Pipe Creek, a stream formed from the confluence of Big and Little Pipe Creeks. Double Pipe Creek only exists for about two miles before it enters the Monocacy River, but it can become a destructive force as townspeople will testify.

Joshua Delaplane recognized the value of land with access to a powerful stream and bought 600 acres straddling Double Pipe Creek in 1794. He then constructed a dam across the creek and built three large mills-one for grinding grain, one for sawing lumber, and one for “fulling.” A fulling mill both cleaned and thickened wool fabric. For many years there were no major floods and the mills flourished under the ownership of several different men.

Sometime in the 1840s, 1850s, or 1860s, a significant flood wreaked havoc along the stream. In 1889, the same storm which caused the infamous Johnstown Flood also caused devastation along Double Pipe Creek. Nothing serious occurred again until 1933. The town has survived at least five major floods, although today it is far from the flourishing community it was when the Western Maryland Railroad arrived in the 1860s and brought prosperity to the area.

Oddly, it was the WMRR which also required the town change its name in 1905. Double Pipe Creek was too long for the railroad’s printed schedules. Railroad tracks still run along a hill at the eastern end of town–just beyond the reach of floodwaters. It is the homes and a store lying further west on the floodplain which bear the brunt of rising waters.

Detour was also part of Frederick County. The original mills lay on both sides of the stream and one of the early mill owners, either Delaplane or George Henry Waesche, built a handsome stone mansion on the Frederick side which still stands. It is well above the level floodwaters will ever reach.  Waesche sold land on the Frederick side for a Methodist church which flourished in the nineteenth century, but today it and the surrounding graveyard have disappeared.

In the 1920s and 1930s, a milk plant called Fairfield Farms Dairy employed about fifty local people and processed 27,000 gallons of milk daily which came from surrounding farms. Gradually the town’s infrastructure such as its school, bank, churches, and stores disappeared and residents began traveling to surrounding towns for religious services, education, and shopping.

If you decide to visit Detour, you can stop at a small park beside the creek, then continue toward Thurmont for a look at the picturesque Loy’s Station Covered Bridge on Old Frederick Road just off Route 77. 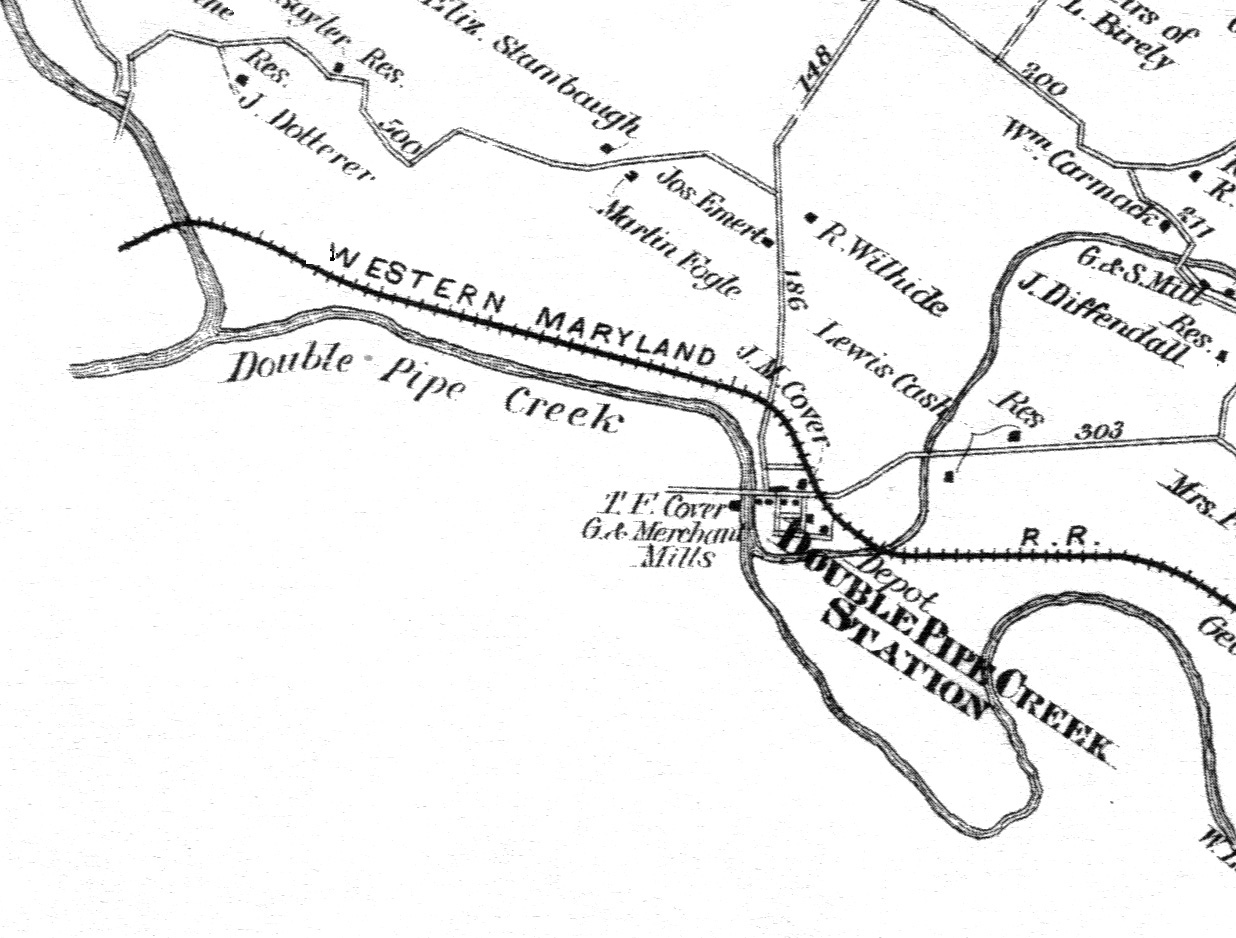 Caption:  On this 1877 map of the village of Double Pipe Creek (now called Detour), you can see the confluence of Big Pipe Creek and Little Pipe Creek just below the village. The blank area on the left is eastern Frederick County.