For those readers of the Times who aren’t aware of local experiences during the Civil War, I’d like to suggest picking up a copy of Frederick Shriver Klein’s Just South of Gettysburg this summer.  First published by the Historical Society of Carroll County in 1963, the book is now in its fifth printing and can be borrowed from public library branches or purchased at several local stores.

The year 1963 marked the one hundredth anniversary of the famous battle at Gettysburg as well as a brief but furious skirmish in the streets of Westminster. On June 29, 1863, about 100 Union (Delaware) cavalrymen clashed violently with the advance elements of General J.E.B. Stuart’s 5,000-man Confederate cavalry corps.  The skirmish, known as Corbit’s Charge, is celebrated yearly on the last weekend in June.  If you contemplate attending this year’s events on June 27-29, your visit will be much more rewarding for having spent a few hours perusing the book.

Editor Klein, with the collaboration of W. Harold Redcay and G. Thomas LeGore, gathered eye-witness accounts from letters, diaries and recollections into a fascinating volume in which local citizens describe the turbulent events of 1861-1865 in their own words.  In addition, there are articles from Westminster newspapers as well as reports which appeared in Baltimore and New York papers.  Klein gave brief introductions to the material, but generally let readers digest each account and form their own opinions.

Just South of Gettysburg covers the entire war period including the last invasion of Confederates in 1864 and looks at the experiences of at least seven Carroll County towns.  Klein also included the impressions of Southern soldiers.  Rebel John Cooke wrote of his passage through Westminster, “Friends, and warm ones, met us but they had a ‘hacked’ demeanor, and many of them spoke under their breath.  Westminster was evidently ‘Union,’ but some families warmly welcomed us, others scowled.”

Dr. Joshua Hering recalled his work with wounded soldiers after Corbit’s Charge.  “The dead and the wounded were lying in the street and we were in the midst of the war indeed.  Stuart’s column was then beginning to pass through [Westminster], embracing the brigades of Fitzhugh Lee and Wade Hampton.  The bodies of the dead were taken away and, with other doctors of the town, I set myself looking after the wounded.”

After the battle in Gettysburg, there was a constant stream of Confederate prisoners passing through Westminster on their way to prison camps. “The prisoners from time to time brought in were a great ‘curiosity’ to all, and large crowds were continually gathered around these brave but unfortunate men…Not less than a thousand men, in motley, ragged costumes, with long hair and lean, wild, haggard faces, were gathered in groups or in pairs about the ground.  They stared around at the spectators in silence; and most of them seemed to be weary and hungry, while all were quiet and depressed.”

It is astonishing just how much material the team of collaborators was able to find.  Tom LeGore still searches for information to construct an accurate picture of Westminster during the period.  He wants to learn more names of shopkeepers, blacksmiths, housewives, farmers, doctors, soldiers and others who participated in or witnessed the events.  Over the last forty-five years, he has amassed many additional stories to share with other Civil War enthusiasts.

Today we sometimes think Carroll County is a place where “nothing exciting happens.”  Not so during the Civil War!  Just South of Gettysburg convinces readers that local citizens were well aware of the war through what they saw, read in the newspapers or heard from their sons, husbands and brothers who went off to fight. 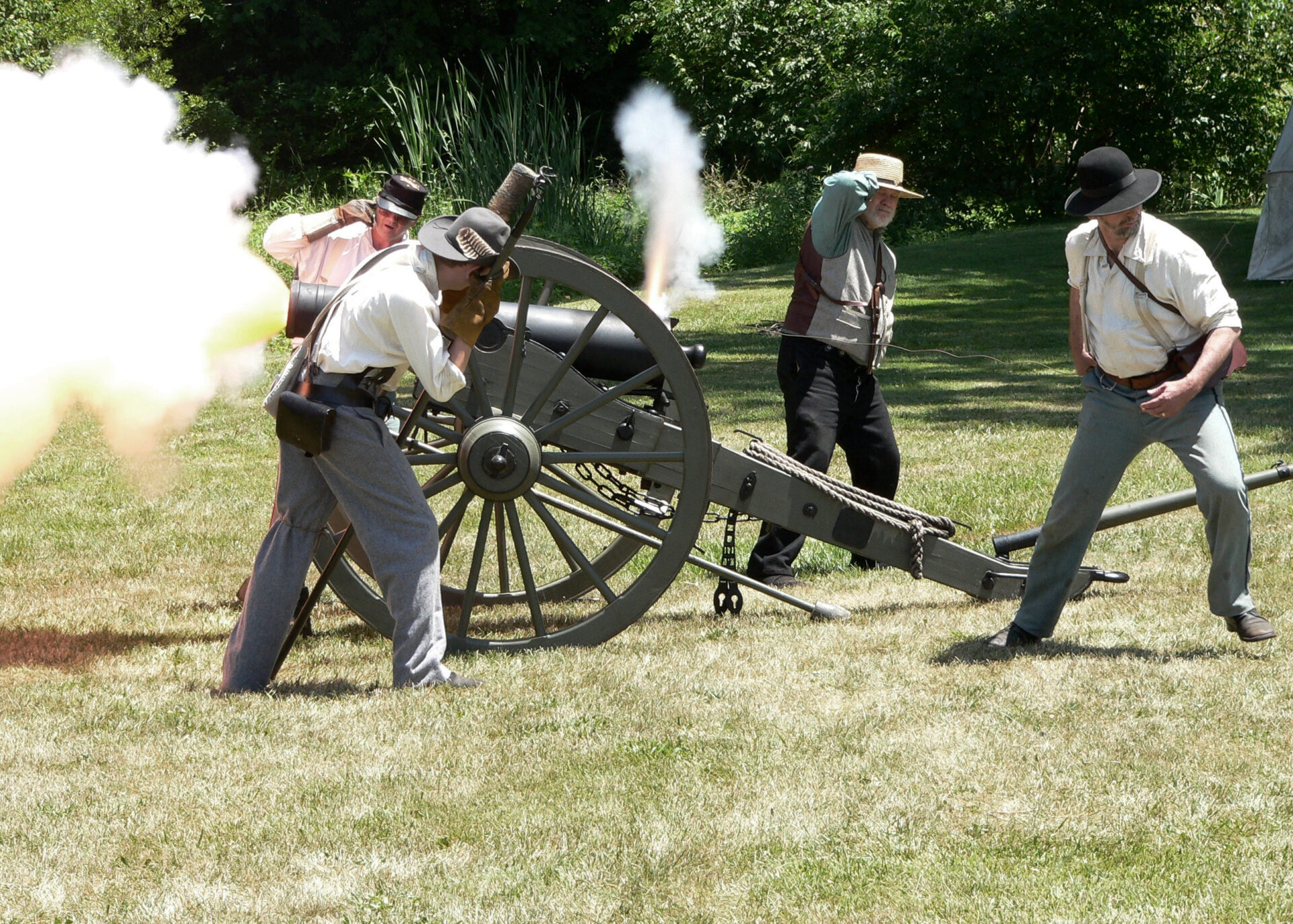 Photo caption: Re-enactors fire a cannon at the 2007 Corbit’s Charge Commemoration along North Center Street, Westminster.  The same site (opposite the Carroll County Office Building) will be used for the 2008 event.