8 May 2016 – Travel to Baltimore was Once a Trying Endeavor

8 May 2016 – Travel to Baltimore was Once a Trying Endeavor

Travel to Baltimore was Once a Trying Endeavor

Have you taken a long trip by plane, train, or car with your children or grandchildren recently? How did you keep them occupied? Did the children have access to an iPad or a DVD player in the car, or movies on the plane? What would you have done if you were Hester and Clotworthy Birnie bringing your eight children across the Atlantic by ship in 1810? When I began reading the diary Clotworthy kept during the voyage, I could only think of how courageous he and his wife were to accept the challenge of moving their family and furniture from the bustling city of Belfast, Ireland, to the tiny village of Taneytown more than two hundred years ago.

Their journey began May 5 on the President, a relatively small American vessel Clotworthy hired. The Birnie children ranged in age from 16-year-old Margaret to 1-year-old Frances, and it is obvious that a vessel of the early nineteenth century was not equipped with the safeguards of modern cruise ships! Mrs. Birnie and the children never left the President until it docked in Baltimore on June 21st, and it was July 20th before the family and its furniture arrived in Taneytown, their destination.

On May 7, the Birnies took their final look at Ireland—the last any of the family would ever have! The next day, Mr. Birnie’s diary says there were strong gales with “a heavy following sea that caused the ship to labour much.” Most of the passengers were sick. Five days later he noted “passengers pretty stout being mostly recovered from sickness.” Meanwhile, there were some tense moments. The President had a close encounter with a vessel which looked to be a French privateer or a British cruiser, but the captain raised all sails and sped away just as night fell. The adult passengers and crew surely were aware that American sailors were being impressed into the British navy during the years before the War of 1812.  Who knew what a French privateer might have in mind. A similar alarming incident occurred several days later, but that vessel continued eastward and was never closer than a mile.

Once everyone had their “sea legs,” things must have improved, although there were many more encounters with gales and heavy seas. Occasionally, the President and friendly vessels sailed close enough to share information. Those incidents must have relieved the boredom as the ship plowed across the Atlantic at six to ten knots an hour. At the end of each day, Mr. Birnie recorded the latitude and longitude in his diary, but he never mentioned how his wife and children were passing the time. Perhaps they watched the porpoises which frequently appeared; once they spotted a whale and a turtle; and once two flying fish landed on the deck. How much could the children play outside, or were they almost always in a cabin?

The President reached Baltimore on June 20th, received a necessary Certificate of Health, and everyone went ashore on the 21st, but arrangements for the final leg of the journey for family and furniture took another month. 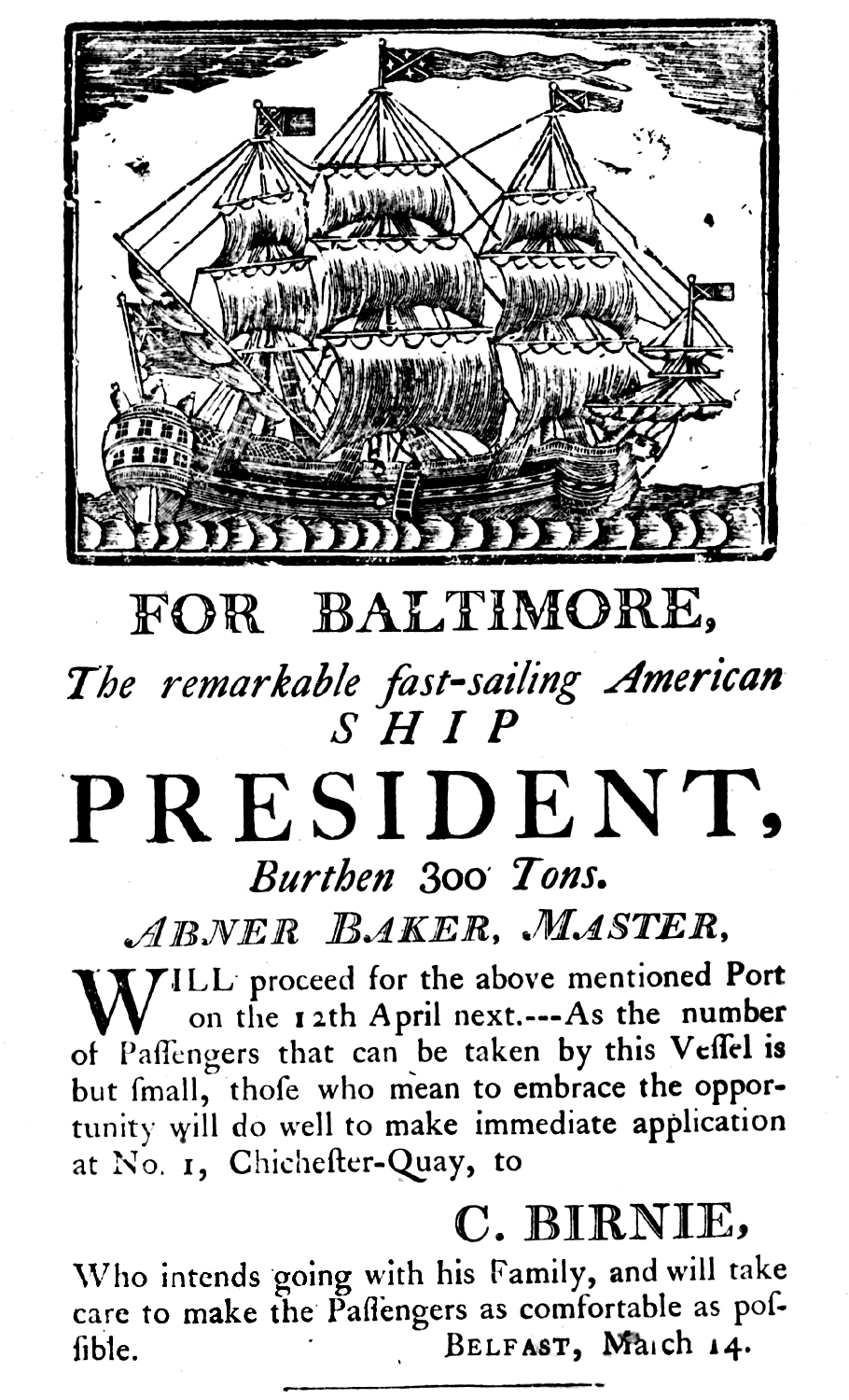 Image caption: Clotworthy Birnie used this broadside to advertise for passengers to accompany him and his family on their journey from Belfast, Ireland, to Baltimore in 1810.