Sitting down with Louis Henry Dielman (1864-1959), a native of New Windsor, must have been a treat for anyone interested in Maryland history. He was a walking encyclopedia, but as one newspaper article explained, “mere facts will be too compressed and too dry to convey the true spirit of a man who served the cause of learning unstintingly through a lifetime as useful as it was long.”

The Dielman family was full of talented individuals. Louis’s uncle was a violinist and composer; his father taught music and German at Calvert College in New Windsor; and his brother Frederick was a widely-respected artist. Members of the family, including his sisters, ran the Dielman Inn, a country hotel whose good food and stimulating atmosphere attracted interesting, cultured guests each summer until the 1920s.

After college, Louis earned a degree in pharmacy and opened a drugstore in New Windsor, but by 1900 he realized pharmacy wasn’t his calling and he began a career as a librarian because of his great love of books. At first he worked in Annapolis, then moved to Baltimore to serve several years at the Enoch Pratt Free Library. Eventually, he began a long association with the Peabody Library, known far and wide as one of the world’s finest reference libraries. The Peabody was a perfect fit for Dielman who liked to be called “Mr. Lou.”

Louis Dielman left his mark on the state of Maryland in many ways – as a photographer, an author and resource for other authors, a donor of rare Maryland sheet music to the Maryland Historical Society, and especially as the compiler of what he called “the morgue.” What, you may ask, is “the morgue?” Officially, it is the Louis H. Dielman Biographical Index of Maryland Names, a huge collection housed at the Maryland Historical Society and constantly used by researchers.

Over more than 30 years, Dielman accumulated roughly 200,000 Maryland obituaries which he clipped from newspapers and journals, copied from books, and from gravestones in cemeteries across the state. He also gathered biographies, relevant pictures, letters, and descriptive passages on Marylanders from all walks of life. Historians have called the Index “perhaps the most valuable single reference source on Maryland history that exists.”

“Mr. Lou” retired from the Peabody in 1942 at age 78 and returned to New Windsor where he resided for the remainder of his life in the former Dielman Inn with his close friends Bob and Julia Cairns and their children. Far from being a recluse and curmudgeon in retirement, “Mr. Lou” enjoyed people. He continued helping anyone needing his vast store of knowledge as well as adding material to “the morgue.” Julia said that he made “everything so interesting that the children learn things they could never get in school. They love him. But so does everyone else in town.”

In 2012, the Historical Society of Carroll County published an article by Frank J. Batavick in its Carroll History Journal entitled “Catching Light and Shadow: The Photography of Louis H. Dielman.” It featured another part of Dielman’s amazing legacy, stunning photographs he took in and around New Windsor. 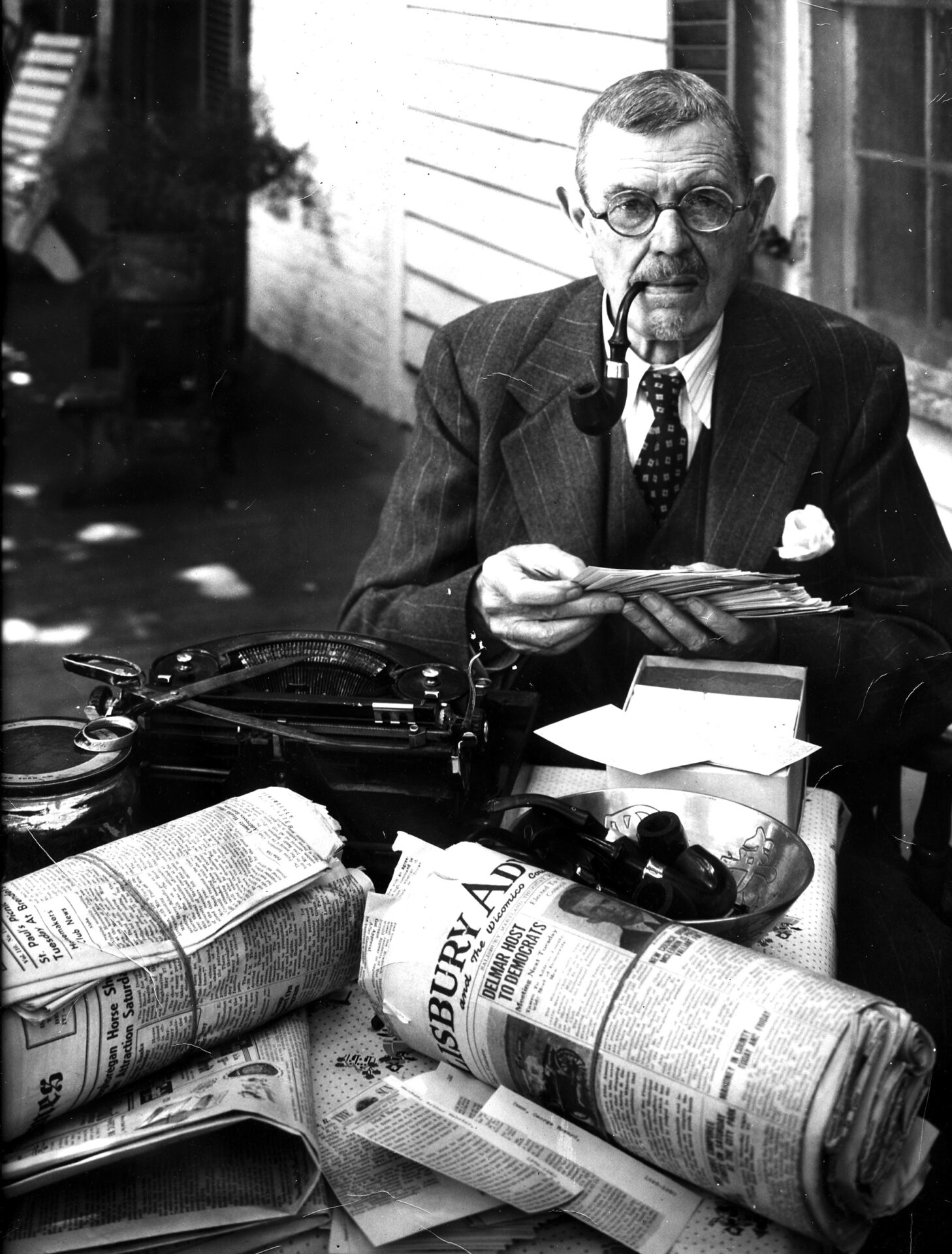 Photo caption: Louis H. Dielman sits on the balcony of the Dielman Inn in New Windsor clipping material from a Salisbury newspaper to add to his massive collection of Maryland biographies sometime in the 1940s or 1950s.