What is the origin of the former names Jewsburg and Mt. Vernon for present-day Marston, a village several miles southeast of New Windsor? Combining information from nineteenth century tax lists and the Carroll County Times, many questions arise.

The town lots which made up tiny Jewsburg were part of 141 acres of land owned by Thomas Ingles (Engels). Charles Bond purchased the first lot from Ingles/Engels in March 1831. Before Carroll County was formed, the 1835 Frederick County tax assessment listed the following Jewsburg lot owners: Charles Bond, John Crook, Levi Devilbiss, James Harp, Joseph Hooper, John Haines, and David W. Naill. All the homes were built of logs and some had stables. There was one shop plus a store.

With the creation of Carroll County in 1837, a new tax assessment was required. The names Jewsburg and Mt. Vernon both appear. Most residents lived in Mt. Vernon; only Joseph Hooper lived in Jewsburg.

Isaac Bond’s 1858 map of Frederick County included a small portion of Carroll County and showed a cluster of about seven houses with the name “Mt. Vernon.” The last time that name appeared was on the 1877 Lake, Griffing & Stevenson Atlas of Carroll County. By 1916, Marston was the name in use.

No known maps show the name Jewsburg, but Maggie Mehring, a teenager attending school in New Windsor during the Civil War, wrote the following in her diary about Union troops on their way to Gettysburg, “The infantry brigade was so long that when their advance guard entered Westminster their rear was just leaving Jewsburg.”

The Carroll County Times of March 6, 1942, states, “We often wonder why Marston was one time called Jewsburg. Many years ago, no doubt there was a family of Jews living in this little village. We remember some of the old residents who have passed away that lived there and if they were living could tell us the story of how the change took place.”

A short piece in the August 6, 1943, issue of the same newspaper says “Mrs. Julia Naill and Mrs. Edward Byers had a great surprise on Thursday afternoon, when a car drove in, with Aunt Effie Gorsuch, son Jesse and wife of Waynesboro, Pa. Glad to say that Aunt Effie was in the best of spirits and stood the trip well. She also spoke of many things that took place when she was in her sweet teens. She spoke of the town of Marston, and said at one time it was Marston at the square and the street that led to Sams Creek went by the name of Jewsburg. The street off the square that leads towards Dennings was called Mount Vernon.”

Hamill Kenny, author of The Place Names of Maryland, said he learned from the Wilt brothers, long-time residents of Marston, that the name Jewsburg arose in the nineteenth century when the village had several Jewish families and a country store.

With uncertainty present over 70 years ago, and the passing of the older generations, the origins of Jewsburg, Mt. Vernon, and Marston may always remain a mystery. 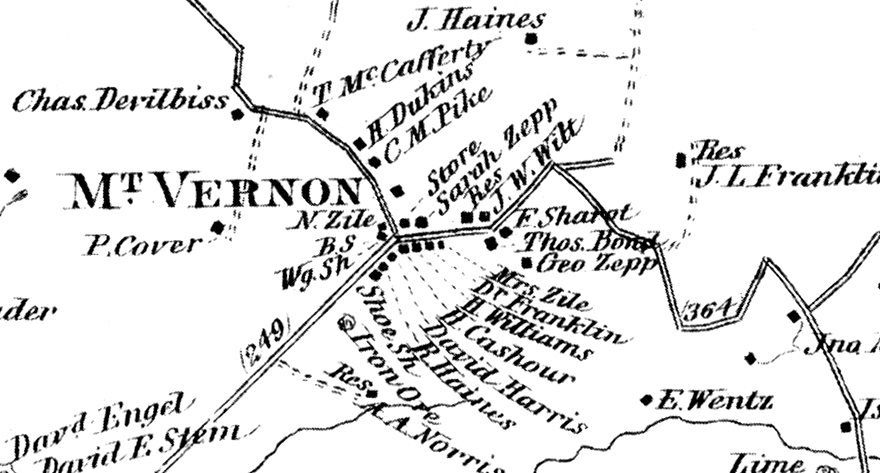