For people who lived in Baltimore and Washington, the small boarding houses, inns and hotels of Carroll County were a summertime mecca.  Getting out to the cool, fresh country air for a few days was probably the goal of any family who could afford it and towns with rail service saw a steady influx of city dwellers.

Sykesville, on the B&O Railroad line, could boast, “as a summer resort, [it] is well known.  The picturesque country, hospitable homes and proximity to the city attract large numbers of visitors every season.  Many new turnouts and strange faces throng our thoroughfares.  Besides the regular summer boarders many Baltimore merchants have their own summer resorts, and after spending a few weeks amid the gayety of the sea-shore settle down in their own country homes and enjoy the sweet peace known only to rural life.  Mr. Wm. H. Anderson’s summer mansion “Windsor Forest” is one of the most attractive homes in Western Maryland.”

The Finksburg correspondent for one paper commented, “Our ‘burg’ is assuming its summer activity from the arrivals of boarders from the cities.”  And in 1887, a New Windsor correspondent wrote, “The summering places are fast filling up.  The Dielman House is all alive, and while we have some handsome ladies here, they also have some otherwheres.  Don’t you forget that.”

The Dielman Inn still stands along tree-lined Main Street in New Windsor although it hasn’t seen a guest for years.  Its long front porch and the large addition at the rear testify to its former role as a popular destination.   A headline in the American Sentinel of 1889 announced a “hop” in New Windsor was inaugurating “the season.”  The following report appeared in a 1902 Democratic Advocate:

To describe the great variety of nightly entertainments held in the parlors of “Hotel Dielman,” New Windsor, in the past two weeks would fill several columns of your valuable paper.  The most prominent of the series, however, were charades, tableaux, a vaudeville performance, an illustrated lecture on the famous Persian poem “The House That Jack Built;” a musicale by the Misses Conniff, of Jacksonville, Mr. Milton Stewart, of Baltimore, and Mr. Merrill, of Annapolis; a comedy, in which the actors…kept the audience in a continual uproar of laughter throughout the evening; Mrs. Jarley’s Wax Works, in which Mr. L. H. Dielman as Mrs. Jarley introduced in humorous address the following distinguished personages – Prince Bismarck, Dick Dead-Eye, Carrie Nation, The Chewing Gum Girl, The Indian Maiden, The Spanish Dancing Girl, Gen. Tom Thumb, The Dutch Girl, The Talking Doll, Miss Ophelia, The Heavenly Twins and Dickens’ Fat Boy…The house has been filled to its utmost capacity the past month.

Trotting races were among the most popular summer events for local residents as well as visitors.   The large fair grounds at the east end of Westminster (now the site of a shopping center) was the location for multiple days of racing as well as elaborate band competitions and team rifle shooting featuring “the best marksmen of Baltimore and Washington, some of whom have engaged in the international matches in England.”  But perhaps jousting tournaments were the most colorful activities of the season.

An account from 1873 described costumed knights on horseback parading through Westminster streets toward the fair grounds preceded by a band.  The knights carried names such as George Shumaker, Knight of Red Cloud; Thomas Henifer, Knight of Lost Cause; and William Shunk, Knight Before Last.  There were 18 contestants in all.  Each man was given five tilts at a ring two inches in diameter and was required to cover the 100-yard distance to the suspended ring in 12 seconds or less.  A smaller diameter ring eventually was used to eliminate poor performers until the winner finally emerged.  He and the runners-up won handsome prizes such as a silver pitcher and goblets or a saddle and bridle.  He also had the privilege of naming the Queen of Love and Beauty, while the runners-up named her maids of honor.  The jousting was followed by an elaborate coronation ceremony.  Pageantry, humor and display of riding skill – these tournaments offered something for everyone.    At the end of the day a ball took place in one of the local hotels where knights could dance with their fair maidens until the wee hours of the morning.

While twenty-first century families enjoy plenty of thrills at Hershey Park or Kings Dominion, the summer activities of the 1870s, ‘80s and ‘90s offered equal excitement and fun to a generation unfamiliar with video games and roller coasters. 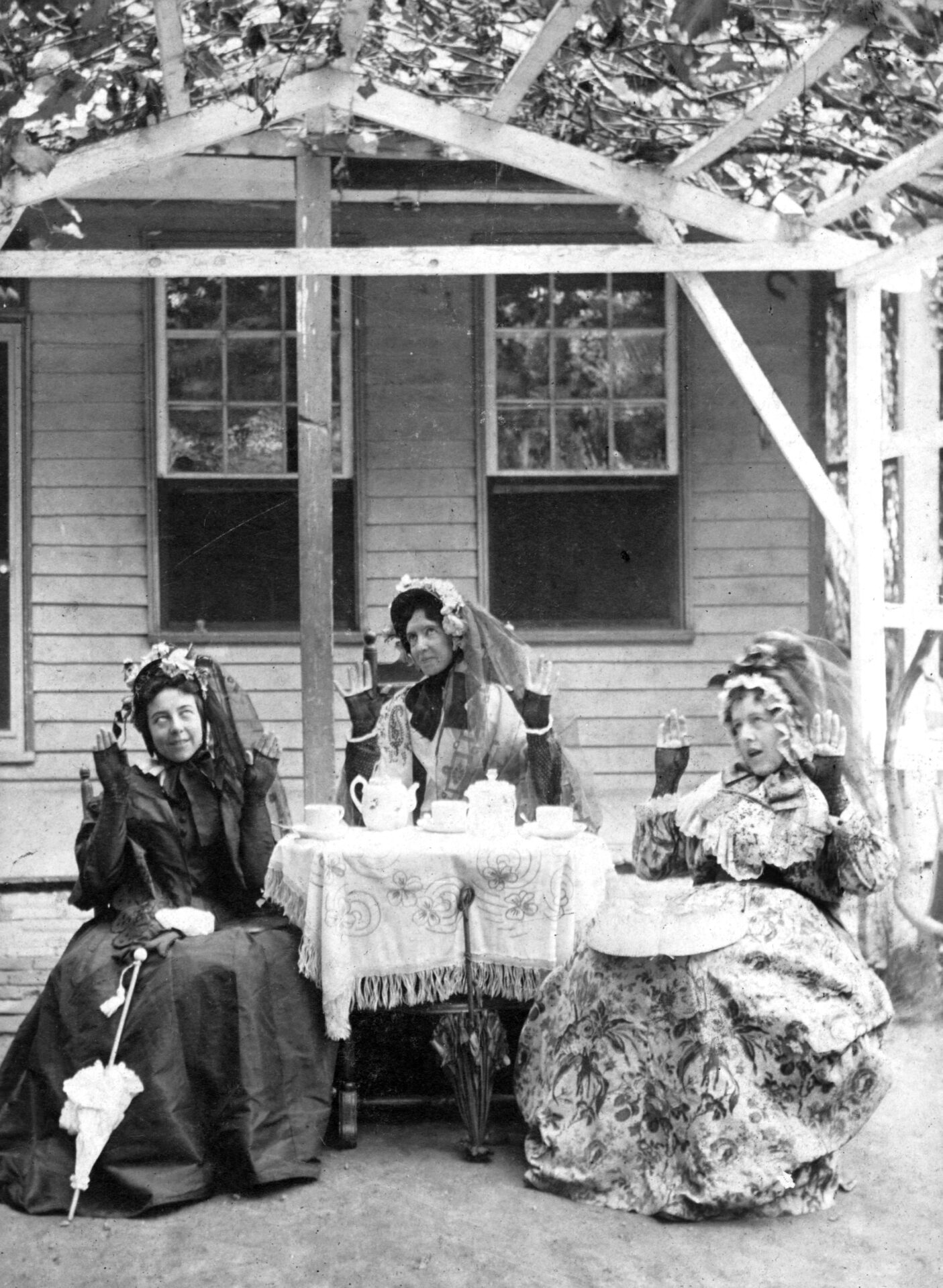 Photo caption:  In this undated photograph, costumed guests at the Dielman Inn [Hotel Dielman] were captured practicing a skit for the entertainment of their fellow boarders.