There’s something fascinating about the cost of items years ago – before people ever worried about gas prices – back when they used horses and wagons instead of cars.

Thanks to the meticulous record keeping of Clotworthy Birnie, an Irish immigrant who arrived in Taneytown in 1810, we know a great deal about his expenses as he established his family in a new country, built a house and became active in the community.

Birnie was wealthy by standards of the times.  He landed in Baltimore with over $4,000 in his pocket.  Accompanied by his wife and children, he settled down east of Taneytown to manage 3,000 acres of land belonging to his uncle.

Even before leaving Baltimore, he purchased a good riding horse for $120 and a milk cow for $20.  The cow must have walked to Taneytown behind wagons hauling the family’s belongings.  Birnie obviously needed help on his large farm, so in October and December of 1810 he purchased several slaves for $325 each.

Frederick County assessed him $46.18 for county and road taxes in 1814, and in 1815 another tax amounted to $179.38.  These large sums attest to his wealth and definitely were not typical of what most citizens paid.  He even paid a $2 tax on a pair of silver watches!

By 1816 Birnie was a stockholder in the Westminster, Taneytown and Emmitsburg Turnpike and involved in its construction as well.  The cost of building and maintaining roads was significant, but good ones were vital to a community’s economy.  A bridge over Bear Branch of Big Pipe Creek cost $120.  In the 1820s the turnpike company paid Cornelious Baust $67.00 to haul 134 loads of stone for the roadbed, but John Fleagle only earned ten cents a perch to break it.  A perch is a volume of stone 16.5 feet long, 1.5 feet high and 1 foot thick.  The wear and tear on man, beast and wagon for road construction must have been extraordinary!

Whiskey seems a bargain in 1816 at just 67 cents per gallon.  Birnie bought 33 gallons!   In 1821, he purchased fabric from a Baltimore merchant whose Canton crepe (silk) cost a whopping $10.50, while an equal amount of white cotton was only 75 cents.

In 1832, Birnie began construction of Thorndale, his large and elegant new home.  Winchester Clingan received wages of $1.50 per day, a considerable sum for the time, especially in comparison to other workmen who earned only $15-$22 per month.  Perhaps Clingan was the foreman because he submitted bills for the work which also included $1.50 per week to feed some of the men.  Bricklayers got 75 cents per thousand for their work.

James Lyon, a Baltimore iron dealer, supplied large iron plates for three of Thorndale’s fireplaces that cost $36.72 and weighed 918 pounds.  Lyon also furnished 96 sash weights for the windows.  Those weighed 787 pounds and cost 3.5 cents per pound.  These items, weighing close to a ton, needed to go to Taneytown, but delivery apparently was not included in the price.  Roof shingles ranged from $5.50 to $7 per thousand.  Lumber for rafters was $1.00 per hundred feet and Birnie bought 1,990 feet.

The scraps of paper on which these transactions are written reveal so much about Taneytown in the early 1800s, not only wages and prices, but also the names of millers, tanners, farm hands, blacksmiths, stone breakers and myriad others who made up the work force of that small community.  They are a gold mine for students of local history. 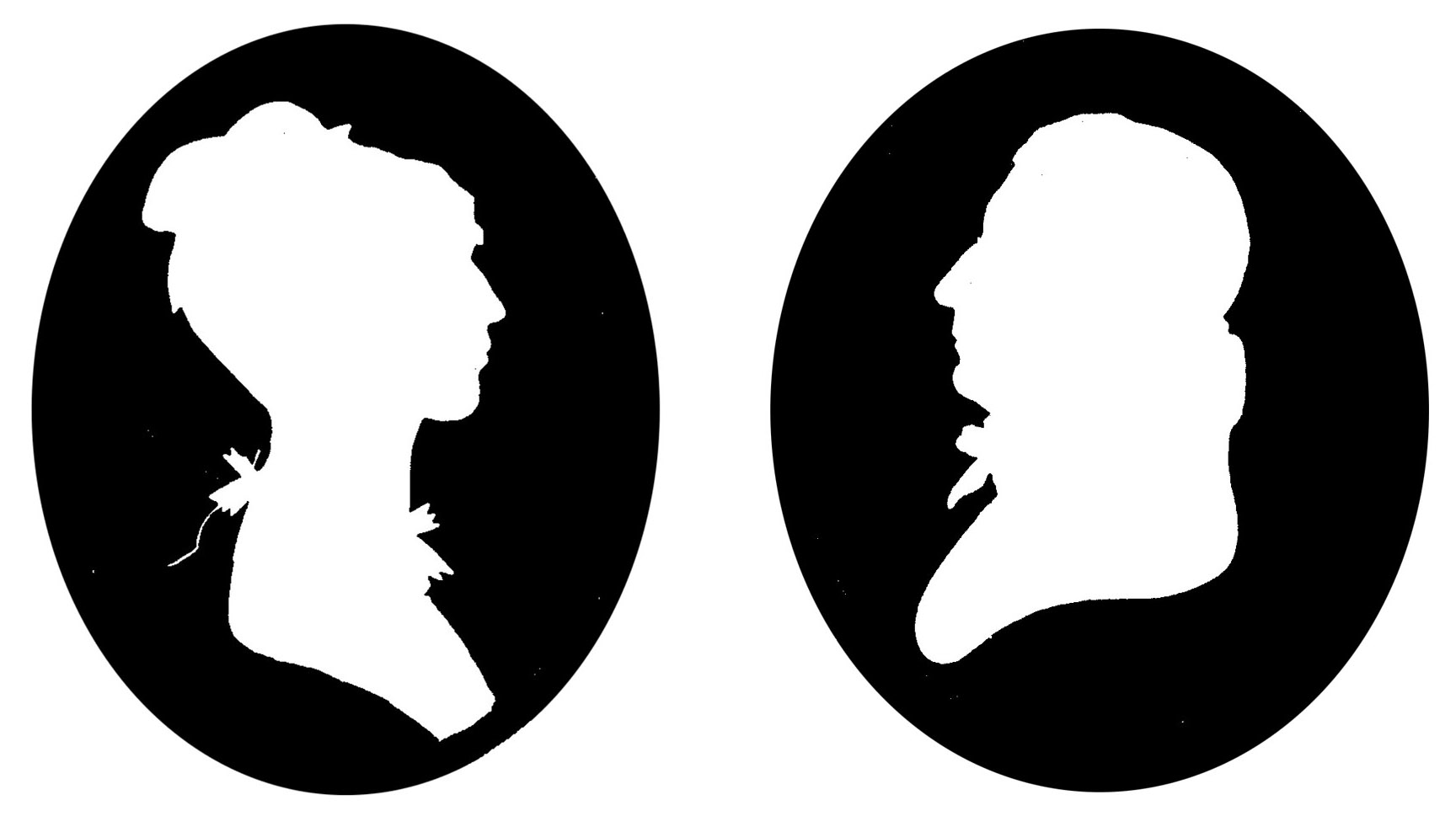 Photo caption:  Undated silhouettes of Clotworthy Birnie (1765-1845) and his wife Hester McNaghten (1772-1841) from microfilm at the Historical Society of Carroll County.