Today the United States observes the 100th anniversary of the end of World War I. Several years ago, Virginia Ecker Hierstetter graciously shared her family’s heart-rending experience during that war with the Historical Society. Franklin Monroe Miller, oldest son of Noah and Lizzie Miller, was born January 12, 1900, in Millers, Maryland, and grew up in Westminster. As a teenager, he was a Boy Scout and worked in the photographic studio of James D. Mitchell. Later he worked as a clerk for the Western Maryland Railway Company. He and two school chums, Carroll Crawford and Glen Miller, joined the U. S. Navy near the end of the war. All three were musicians and could serve in that capacity with the Navy. A newspaper article called Frank “a cornetist of unusual talent.” The boys’ parents probably felt their sons would be joining a relatively safe branch of the military. Frank left home September
17, 1918, for training at the U.S. Naval Base, Hampton Roads, Virginia, Co. 42, Unit X. Within two and a half weeks, he was admitted to the base hospital where he died October 5 of lobar pneumonia. The following day, Germany sued for peace and on November 11, 1918, the armistice was signed and fighting finally ended, but it was too late for Noah and Lizzie’s son.

Lizzie became active in the American Legion Auxiliary and the American Gold Star Mothers, always rode in Memorial Day parades in Westminster, and always placed a wreath at the Westminster Cemetery mound. She and other Gold Star Mothers regularly visited veterans at Fort Howard V.A. Hospital in Baltimore. During her long life (1872-1964) she made over 50 lap robes out of men’s neckties for the Fort Howard paraplegics. In 1918 there was no guarantee that young Frank would live to a ripe old age like his mother. That year saw the beginning of one of the worst pandemics in world history – the spread of the “Spanish flu” or influenza. Frank’s lobar pneumonia was a common complication of the viral infection which spread rapidly in the close quarters of the nation’s military camps, among the troops of various nations fighting in Europe, and in the civilian populations across the globe. Maryland’s Camp Meade saw the first cases of the flu in September. The naval base at Hampton Roads likely experienced an outbreak about the same time. Had Frank not enlisted but remained in Westminster, the flu might have caught up with him
anyway. Health department officials in Maryland were so concerned about the spread of the disease in September and early October that schools, churches, and movie theaters were ordered closed beginning in mid-October. Public meetings, public sales, and other community gatherings were forbidden. Although the bans were lifted relatively soon, deaths from the flu continued well into the year 1919. Between September 1918 and June 1919, about 675,000 deaths occurred in the U.S. as a result of the pandemic. These statistics did not offer any consolation to Frank’s family, but serve today as a background for the dual tragedies of World War I and the flu pandemic.
Mary Ann Ashcraft is a library volunteer at the Historical Society of Carroll County. 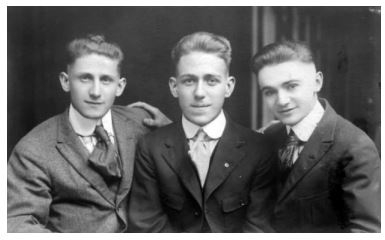 Photo caption: Frank M. Miller (center) and two of his chums, Carroll Crawford and Glen
Miller (no relation), posed for a photo about 1918 before all three joined the U.S. Navy near the
end of World War I