Feeling the Pain of Civil War

When historian R. J. Rockefeller spoke at a recent Carroll County Genealogical Society banquet, he described the activities of Maryland soldiers from the 1700s through World War II, but he went one step further, pleading with listeners to do more than collect the names and dates of ancestors, their ranks and the battles in which they fought.  “Try to understand what they went through,” he urged.

Three days after hearing Rockefeller’s plea, the Genealogical Society received information from a former Carroll County resident whose great-grandparents lived in Middleburg at the outbreak of the Civil War.  The documents she sent revealed heart-wrenching details of what Samuel Thomas Lynn and his wife endured between 1862 and 1865.

Samuel wasn’t your typical Civil War enlistee when he joined Company F of the 7th Maryland Infantry in August 1862.  He was a carpenter and the 32-year-old father of 6 children.  The oldest child was just seven and the youngest 5 months.  He signed up for a 3-year stint, leaving his 30-year-old wife, Susan, to care for the children and the home place while he was gone.  Perhaps patriotism, substantial bounty money for enlisting and regular military pay induced him to join.

The following year, 1863, was a terrible one for Susan.  She gave birth to a daughter who died almost immediately.  Between March and June, three more daughters died and she laid them to rest beneath tiny headstones at Mt. Union Lutheran Church.

Near the end of June, several corps of the Union Army, probably more than 15,000 men, marched through the Middleburg area on their way toward Gettysburg.  Fences were torn down and crops were trampled as General Meade’s troops rushed north to confront the Confederate army swarming over south-central Pennsylvania.  It is likely that some of Susan’s property lay in its path.

Although Samuel and his fellow soldiers in the 7th Maryland saw military action throughout 1863, it was nothing like what they experienced in the spring of 1864 as Union forces attempted to capture Richmond, Virginia, capital of the Confederacy.  From the opening week of May until the beginning of June, the regiment participated in one ferocious battle after another – The Wilderness, North Anna and Cold Harbor.  Ultimately, the Seventh settled into life in the trenches outside Petersburg, Va.   Samuel Lynn survived thirty months of service apparently unscathed until February 6, 1865. When his regiment participated in a battle known as “Hatcher’s Run,” his luck ran out.  To the best of anyone’s knowledge, his body rests at Poplar Grove National Cemetery with about 4,000 other “unknowns.”

In 1877, Susan wrote officials asking for financial help.  She was still owed some of Samuel’s bounty money and she said that, “[after] the sad news of Mr. Lynn’s death my nerves give way & I was unable to read for several years or no about the laws that was passed by congress.”  Did she have a nervous breakdown?  Surely what she had experienced might have caused one.

Susan’s letter, Samuel’s military record and the row of stones in the churchyard allow us to put ourselves into this family’s shoes. 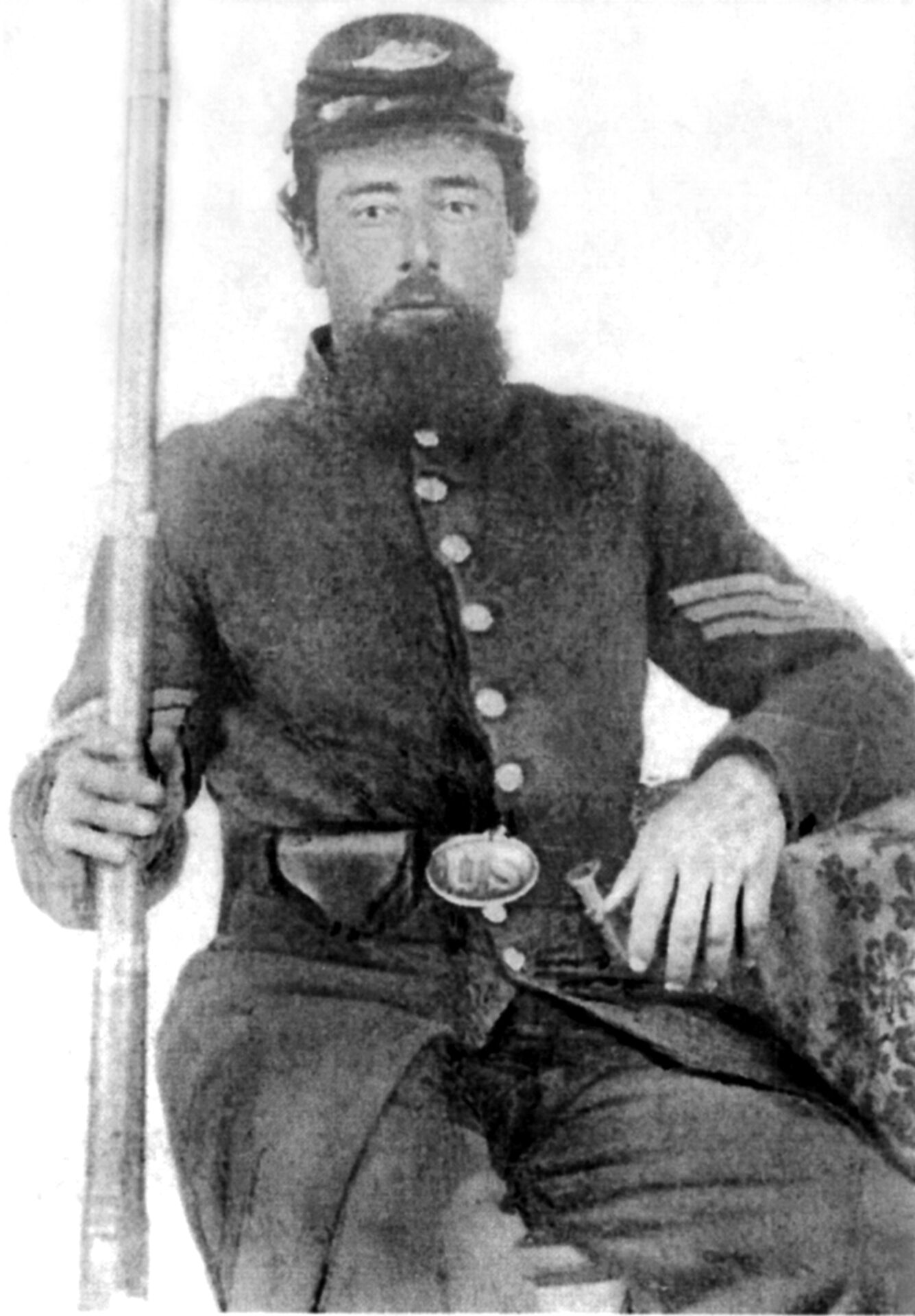 Photo caption:  Samuel Thomas Lynn of Middleburg, Carroll County, must have posed for this photograph soon after he entered Civil War service as a sergeant in Company F, 7th Maryland Volunteer Infantry.  He was promoted to first sergeant within several months and served in that rank until his death on February 6, 1865.