For Americans, the Thanksgiving holiday is usually traced to a celebration at Plymouth, in present-day Massachusetts. In 1620, a group of English settlers crossed the ocean to create a new colony in North America. They arrived too late in the year to plant any crops and only about 50 of the group survived the harsh winter on the supplies they had brought with them. The following spring, friendly Native Americans taught the Pilgrims how to plant corn and other crops and harvest local plants for food. That fall, in 1621, the Pilgrims reaped a bountiful harvest and secured the colony’s survival. The Colony’s Governor, William Bradford, threw a celebratory feast and invited the Native Americans to take part. The Indians brought food and the celebration lasted for three days.

The custom of marking good fortune with a day of thanks quickly caught on. During the American Revolution, the Continental Congress called for a day of thanksgiving to mark the American victory at the Battle of Saratoga. The first official Thanksgiving Day celebration in Baltimore was on December 13, 1781, just after George and Martha Washington passed through the city on their way to Philadelphia. In 1863, in the midst of the Civil War, President Abraham Lincoln proclaimed a national Thanksgiving Day to be held each November. After the Civil War, Congress made Thanksgiving a national holiday.

There are no records of exactly what was eaten at the first Thanksgiving feast, but historians believe it most likely featured venison or fish. The celebration in Baltimore in 1781 included venison, goose, and wild fowl. Today, 90% of Americans have turkey on the menu. The National Turkey Federation estimates that 46 million turkeys are eaten at Thanksgiving. The average weight of a Thanksgiving turkey is 15 pounds, which means approximately 690 million pounds of turkey are consumed.

Along with all that turkey, there’s cranberries-almost 140 million pounds. Wisconsin, Massachusetts, New Jersey, Oregon, and Washington are the top cranberry growing states but there were also cranberries in Carroll County.

The Democratic Advocate newspaper in 1886 reported that the Cranberry Valley was located just 3 miles from Westminster. It had gotten its name from the fact that wild cranberries flourished in the area and residents picked them in large quantities and sold them to Westminster storeowners. Apparently, by this time most of the wild cranberries were gone, for the paper lamented: “It was a mistake, no doubt, to break up and destroy these natural cranberry beds, for had they been judiciously preserved and cultivated, they would have paid better than some other crops for which the ground was not naturally adapted.” The legend of the cranberry bushes continued for decades-when the new shopping mall in Westminster opened in the 1980s, it was named Cranberry Mall. 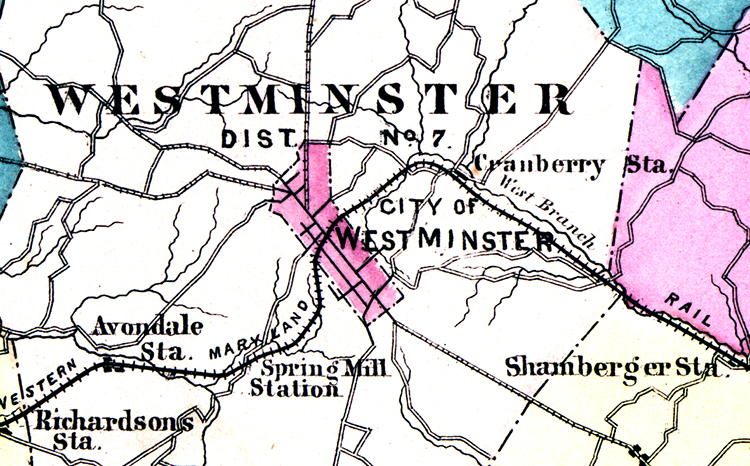 This detail map of Carroll County shows the area of Cranberry.