Looking Back at Crucial Presidential Elections of 1860 and 1864

In what could be the most controversial election in our country’s history, it seems appropriate to look at another election or two which took place nearly 160 years ago—the crucial presidential elections of 1860 and 1864. Those were turbulent times as the southern states threatened to secede if the man entering the White House did not recognize their states’ rights demands. They did immediately following the election of Abraham Lincoln, setting the stage for four years of bitter conflict.

How did Carroll County fit into the election picture in 1860, and then again, what were its feelings in 1864 when the Confederate States did not participate at all in the election? The results in 1860 reveal that Carroll County and all of Maryland had a decidedly pro-Southern leaning. After all, Maryland was a slave-holding state and might have seceded along with its neighbors to the south if Lincoln had not sent in federal troops.

Contentious conventions in the spring and summer of 1860 tore apart the well-established Democratic Party, and two separate parties emerged – the “Northern” Democratic candidate was Stephen Douglas of Illinois; the “Southern” Democratic candidate was John Breckinridge of Kentucky. Abraham Lincoln was the choice of the Republican Party, a party that had fielded its first candidate in 1856, being relatively new on the political scene. A fourth party, one advocating compromise, also participated in the election. John Bell of Tennessee was its candidate. Today we hardly remember any of these names except Lincoln, although the Lincoln-Douglas debates are often mentioned during U.S. history classes.

Nationwide, Abraham Lincoln received 39.8% of the popular vote; Douglas received 29.5%; Breckinridge received 18.1%, and Bell got 12.6%. Lincoln was not even on the ballot in nine southern states. Despite receiving a large number of popular votes, Douglas did not receive many electoral votes.

Breckinridge carried most of the South plus Maryland and Delaware. Bell took Kentucky, Tennessee, and Virginia, and Lincoln carried all the northern states plus Oregon and California, easily winning most electoral votes.

In Carroll County, the sentiments expressed November 6, 1860, were decidedly in favor of states’ rights or compromise. The county cast roughly 4,500 votes. Fifty-one percent of the voting population favored Bell’s Constitutional Union party; forty percent voted for John Breckinridge, the “Southern” Democrat; eight percent voted for Stephen Douglas, while a mere one percent supported Lincoln. There was only a single vote cast for the man who has since become one of America’s greatest heroes in the Taneytown Election District. Across Maryland in 1860, Lincoln did not do much better than he did in Carroll County. He received only 2.5% of the popular vote. Douglas garnered 6.4%, and Bell and Breckinridge split the remaining 91% of the votes almost evenly. It is little wonder that Lincoln was not sure he could rely upon Maryland to stay in the Union when the Civil War erupted.

In 1864, only two presidential candidates were on the ballot in the states that had remained in the Union; George McClellan ran as the Democratic Party candidate, and Lincoln ran under the National Union Party’s banner. That party soon ceased to exist, and Lincoln has always been considered a Republican. Carroll County gave Lincoln 52% of its votes in 1864, and McClellan received 48%. Over 70% of the Union soldiers cast their ballots for President Lincoln even though former General George McClellan had been their much-respected Union commander during the early period of the war. 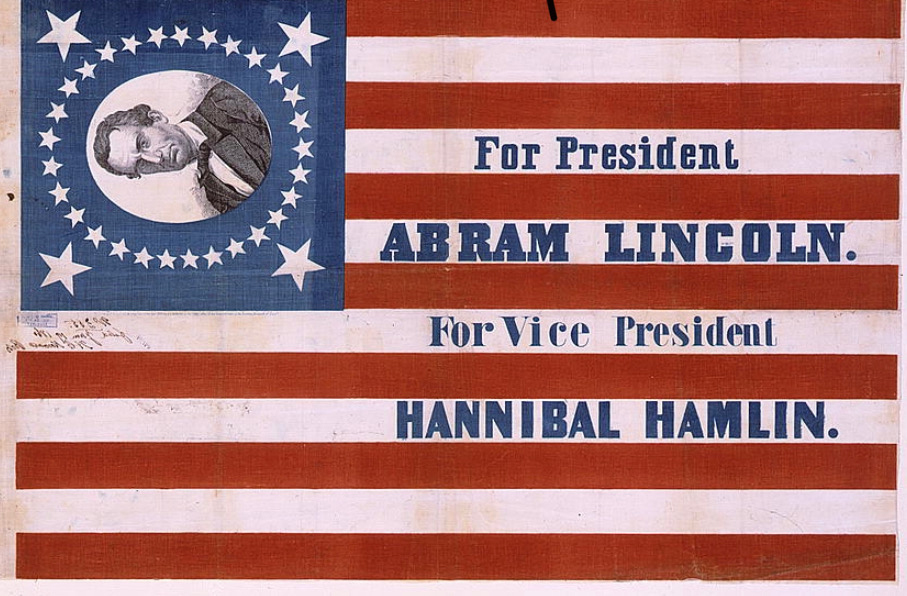 Caption: Abraham Lincoln and his running mate, Hannibal Hamlin of Maine, appear on this campaign banner from 1860. The banner was supposed to hang so Lincoln appeared vertical. The background is a 33-star flag. (Library of Congress)