How do you start a brand-new county? The next few paragraphs offer a glimpse into the actions of Carroll County’s first commissioners as recorded in the earliest minute book they kept. How fascinating to have a glimpse of Carroll’s 1837 beginnings! Otho Shipley was elected as clerk to keep those minutes and, lucky for us in the 21st century, his
handwriting is still very legible in the well-preserved book. Yes, he used the old-fashioned double “s” which looks rather like an “f,” but you soon become accustomed to that. For the most part, his spelling didn’t differ too much from ours today. In one instance he recorded that the commissioners were looking for “a Scite for the Public Buildings . . . a Court House & Jail Scituated on Mr. Isaac Shriver & Mr. John Fishers Lands.” Words occasionally become more challenging to decipher, but it helps when you have spent time reading old wills, deeds, and census records.

It was rather disappointing to learn that the first public building to be constructed would be a jail. In fact, even before building one, Joshua Sundergill’s house on Westminster’s Main Street became a temporary place of incarceration. The sheriff was to “procure such chains and rings and other necessary articles as he may require for the security of the prisoners that may be committed to his care. . . .” Bids were accepted for constructing the permanent jail within those first few months and the contract awarded to Benjamin F. Forrester, a carpenter. He and Johnze Selby went to work right away. In 1844 Forrester would erect the elegant brick mansion Antrim in Taneytown, but in 1837 he was constructing a four-story building out of dark stone that looked very forbidding with iron bars on its narrow cell windows.

There was mention of the “Free School Fund”—money to build schools in the new county acquired from its Baltimore and Frederick neighbors. In 1837 private schools provided education for children whose parents could afford to pay the tuition, but the Free School Fund was intended to build schools for youngsters whose parents could not afford to pay. Happily, by 1852 Carroll County would boast 31 free schools with 31 teachers and 708 scholars. The tax rate that first year was set at $0.27 per $100 of real and personal property. If you owned a gold watch and a silver teapot, you were not only taxed on the value of your real estate but also on the value of your personal property. By late 1837, with jail construction nearly finished, arrangements for building a court house began in earnest. Colonel James Shellman and Henry Geatty (or Geitty) each received $10 for drawing up the plans. On October 25 notices appeared in the Carrolltonian and the Chronicles of Baltimore soliciting bids for construction. Conrad Moul landed that contract while Peter Roadpouch was selected to dig the well. Henry Mourer’s bid for supplying bricks proved the lowest. Jacob Mathias received $40 to act as superintendent of construction. As the first year drew to a close, Westminster, the county seat, was a hive of activity. 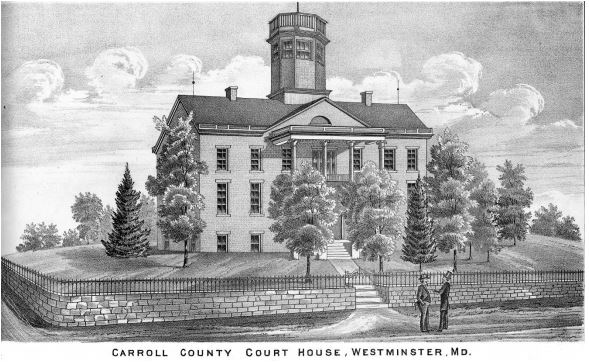 Image caption: The county’s impressive court house, begun in 1838, appears in this drawing from the
Lake, Griffing, and Stevenson Atlas of Carroll County published in 1877. The stone wall topped by a fence is gone and the wings seen today were added at a later date.