Whether you enjoy ornate old houses or prefer something plain and modern, there are two spectacular examples of Victorian-era domestic architecture worth seeing in Carroll County. They sit at high points in the towns of Sykesville and Westminster and were built in the 1870s or 1880s by men of means. The Norwood Mansion, also known as Mount Terrace, in Sykesville, retains almost all of its original features. Terrace Hill, on the McDaniel College campus, has been significantly modified, but is still a very impressive structure. Let’s begin with Sykesville’s Norwood Mansion. In the 1880s, Frank Brown, a wealthy resident with an entrepreneurial spirit, envisioned turning the town into a summer retreat by building a large number of homes that could be rented by well-to-do Baltimore residents who wanted to escape the city’s heat and unhealthy atmosphere. Visitors could arrive on the Baltimore and Ohio
Railroad, move into one of Brown’s cottages scattered around the town, and take advantage of a central dining hall connected to the cottages by boardwalks. Norwood Mansion started out as one of these cottages, a simple, two-story, cube-shaped frame building with an almost flat roof. Each had a central front door flanked by two windows and
three windows across the front on the second floor. Before long, Brown began selling off his cottages to people who often modified them and lived in them year-round. In late 1886, John E. Norwood, an agent for the B&O who was living in Sykesville’s newly erected Baldwin Station, bought one of those cottages that sat atop a hill on the western side of town with an uninterrupted view of the railroad tracks and station below.

Norwood (1829-1912) was a veteran of the Mexican War and called himself a “tinner” in early census records. He enjoyed inventing things to improve railroad cars and was awarded several patents for them. He soon showed an interest in modifying his simple Brown cottage with almost every architectural feature popular at the time. He changed the roof, added bay windows and more porches, a tower, elaborate trim, and erected a windmill behind the house to pump water from his well, then put an ice house above it. While some Victorian-era homes had two-story towers, Norwood’s had three, the uppermost being a cupola. Stained glass in some windows matched that used in Baldwin’s Station. Observers even caught a hint of Japanese influence in the house’s design. There are names for
various architectural styles, and Second Empire probably best fits Mount Terrace. By 1887, a report in Westminster’s Democratic Advocate noted that “John E. Norwood the [B&O] agent at this place [Sykesville] has made remarked improvements on the lot recently purchased of Frank Brown.” Most of Norwood’s changes were applied to the exterior of the house; the interior remained relatively plain.

Around 1891 Norwood resigned as the B&O agent to lead his own firm, the Norwood Car Replacer Company, in Baltimore, but continued living in Sykesville until 1895 when he sold the house and moved into the city. Fast forward to acquisition of the house about 1985 by Jonathan Herman and his wife who saw an intriguing advertisement for it in the real estate section of the Baltimore Sun. By that time the old place had become a dilapidated “hippie haven” – a Sykesville eyesore. The Hermans were up to the challenge of cleaning up the property and restoring the house because Jonathan’s expertise was in historic restoration. Little did the couple realize, however, what cleanup would ultimately
entail – removing abandoned cars, using earth-moving equipment to bury other large items, having a controlled burn of flammable material under the watchful eye of the Sykesville Fire Department, and hauling away 30 dumpsters-worth of other debris to the landfill. In 1999 the Hermans sold the restored mansion after preserving most of the original features for 21st century enjoyment and moved several houses down Norwood Avenue where they live today.
When you study the accompanying modern photograph, count the number of windows on just the sides of the house that are visible. See if you can detect the basic cottage that John E. Norwood transformed.

The second impressive house, Terrace Hill, is located on a wedge of land at the western end of Westminster that is now part of the McDaniel College campus. John L. Reifsnider, Sr. (1836-1905) had the huge brick house built from scratch in 1873 using an architect’s plans. It consisted of two 2 ½-story cubes with multiple steeply pitched gable roofs having decorative woodwork within the gables. There were six impressive chimneys as well as a tower topped by a 20-foot obelisk, many bay windows, and an elaborate front porch. The house stood on 4.5 acres that included a compound of greenhouses, a 5-story windmill, and terraced front lawn that led down to simpler homes on Main Street. Reifsnider, unlike Norwood, spent his entire life in Carroll County. He became a very successful merchant and served as a director, president, or trustee of many local institutions although ill health caused him to retire from running his business just five years after finishing his amazing house. The Maryland Historical Trust calls Terrace Hill a “monument to 19th century American capitalism.”

The house remained in the Reifsnider family until sold to Western Maryland College (now McDaniel) in 1950. At that point many of the original, elaborate architectural details were removed although the building you see today is still impressive. A drive or stroll past both of these amazing houses is well worth your time. Imagine how the interiors might have been decorated and envision the elaborate dresses worn by Mrs. Norcross or Mrs. Reifsnider as they stood in their doorways welcoming visitors. Study the photographs of both buildings to discover many details not mentioned in this article.

Mary Ann Ashcraft, a library volunteer at the Historical Society of Carroll County, is grateful to Jonathan Herman for sharing many details about the house he restored.
Photograph #1 (submitted photo)

Photograph #1 caption: The Norwood Mansion as it appears today with the windmill in the background. 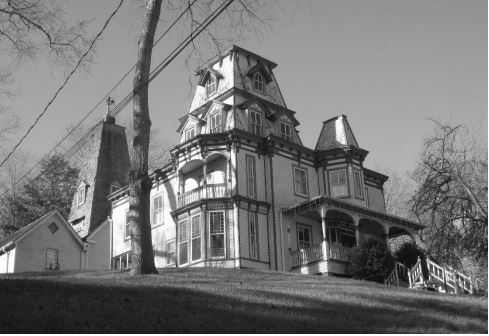 Photograph #2 caption: A 1943 snapshot shows the cupola that once topped the Norwood Mansion’s tower. 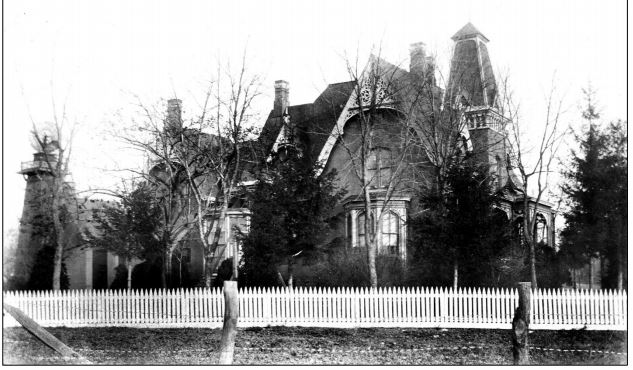 Photograph #3 caption: John L. Reifsnider, Sr.’s home, Terrace Hill, appears in this 1880s photograph. The front entrance on the right faces downtown Westminster. Much of the original trim was removed when the building became part of the campus of Western Maryland College, now McDaniel.