Most of us become a bit nostalgic at this time of year. I began looking back at my volunteer time with the Historical Society of Carroll County starting in 2002. It has provided not only many opportunities to learn more about local history, but also to meet lots of interesting people who visit our research library.

One of the first projects I worked on was cataloging a newly-arrived assortment of papers once belonging to John Diehl Bowman, a farmer who lived his entire life (1812-1900) in Middleburg. Who knows where they had been stored in the hundred years since Bowman died, but it looked as if they’d been on the floor of an attic. Most pages were dirty, yellowed, and crumbling around the brown edges. Luckily, the family recognized the value of their donation.

There was a decrepit book missing its cover in which Bowman recorded his daily activities –what he planted or harvested or references to unusual weather. But on entries during the summer of 1863 he wrote the following, “June 29th, 30th, & July 1st – the Army of the Potomac moved through this neighborhood to Pennsylvania.”  On July 2nd & 3rd he wrote, “Hard battle at Gettysburg.” There are no more details. Did the army trample crops, steal fence rails, receive handouts of food or water as they passed by? Could he hear the cannons from Gettysburg? We are left to wonder what those momentous five days were like for people in a quiet village like Middleburg.

The Bowman material also included a ledger showing names of local people with whom John had financial dealings. He paid for help husking corn, butchering, threshing, chopping wood, spreading dung, making shingles, etc. The men and women doing this work were all local, so a historian or genealogist will discover the names of Bowman’s neighbors laboring for less than a dollar a day in the 1830s and 1840s. Mary and Ann Hines each received a quarter for a half-day of digging potatoes.

We have little idea of the prices country people paid for food, animal fodder, and clothing or fabric before the Civil War until a ledger such as Bowman’s offers insight.  Jacob Ecker paid $5.00 for half a ton of hay; David Shriver paid three and a half cents per pound for 63 pounds of beef; and Bowman himself bought 25 herring and 4 shad for $0.81.  There was no Walmart offering bargains!

John Diehl Bowman created countless lists on scraps of paper – in the margins of newspapers, on the backs of envelopes, anywhere he found several square inches of space. He appears to have been a meticulous recorder of everything, perhaps to the point of being obsessive-compulsive. Ann Elizabeth Dern worked off and on for him for at least four years before marrying him in 1842. She must have known what kind of husband he would be.

Preservation of the papers associated with an ordinary person like Bowman by the Historical Society guarantees that people of the 21st century can look back into the 19th century and better appreciate what everyday life was like.

Mary Ann Ashcraft is a library volunteer with the Historical Society of Carroll County. 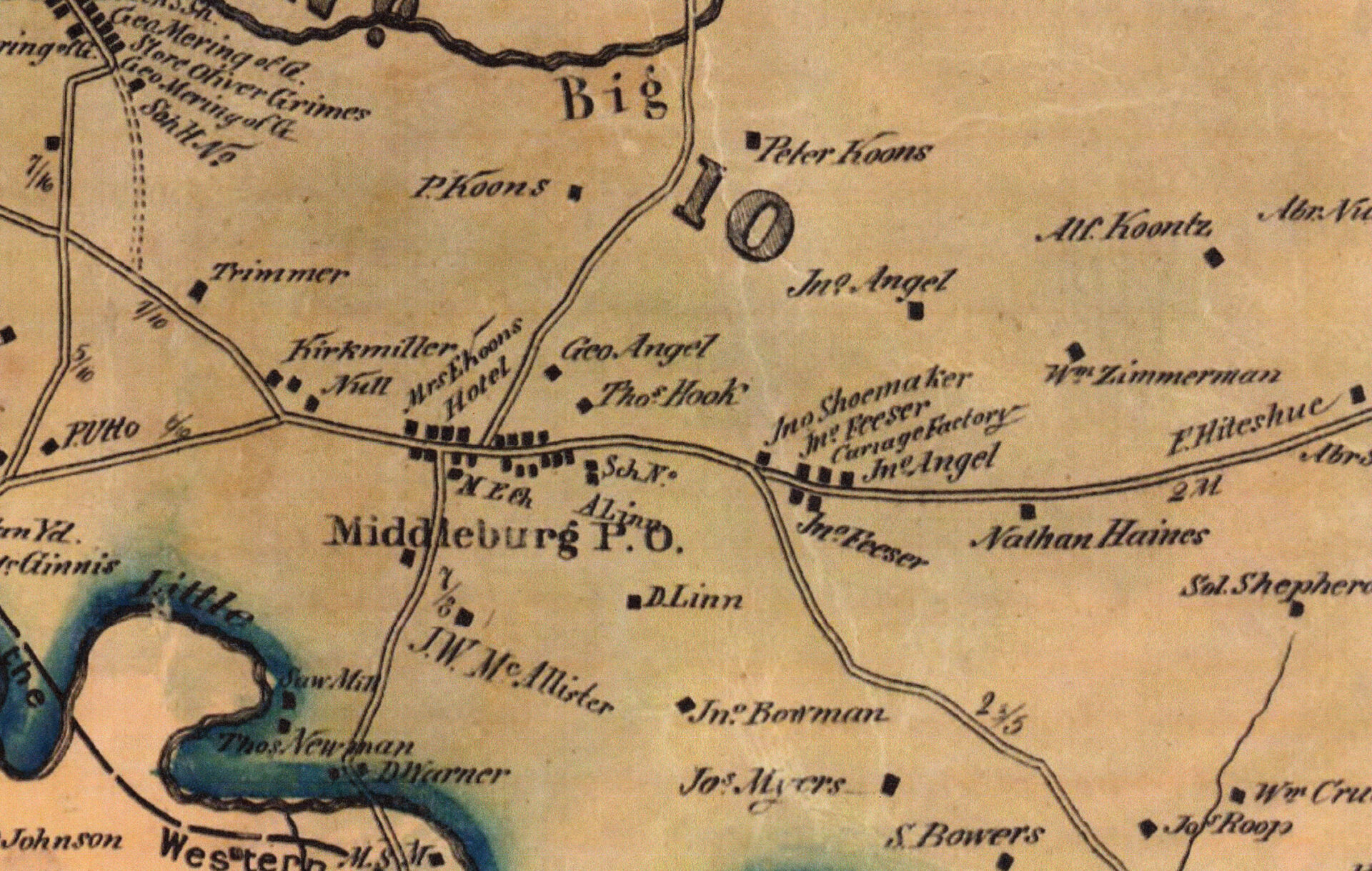 Photo caption: John Bowman’s name appears near the bottom of this portion of a Carroll County map made in 1862. Bowman owned a sizable farm on the southern outskirts of Middleburg west of Uniontown.