One hundred years ago, the U.S. was successfully avoiding involvement in the bloody war raging across Europe, but it had a reason to send troops to its border with Mexico. Approximately 100 Carroll County men, members of Company H, First Infantry, Maryland National Guard, plus the First Infantry Band, enthusiastically took off for assignment to Eagle Pass, Texas, where they guarded a bridge over the Rio Grande from July until November 1916. Mexico had been in political turmoil since 1910, but it was a raid on Columbus, New Mexico, by Pancho Villa on March 9, 1916, which led President Woodrow Wilson to call up 12,000 men from National Guard units around the country and put John J. “Black Jack” Pershing (later of WWI fame) in charge of the Mexican Punitive Expedition to capture Villa. Villa’s raid was ostensibly an effort to gather horses, mules, and military equipment for his revolutionary soldiers, but it left Columbus in ruins and 18 Americans dead.

The members of Company H bore well-known Carroll County names like Berwager, Billingslea, Bitzel, Frock, Heltibridle, Herr, Jordan, Leese, Lockard, Magin, Myers, Stoner, Wimert, Yingling, etc. Not since the Civil War had Carroll sent off so many of her sons to battle, but it appears this group went quite willingly. They departed for Camp Harrington near Laurel, MD, from the Westminster train depot early on the morning of June 21st amid lots of fanfare and tears. Over 100 employees of the Carroll Oak Tanning Company located along the Western Maryland
Railroad tracks lined up in military style in front of the company’s bark sheds to continue the enthusiastic send-off as the train moved east toward Baltimore. F. Lamotte Smith and his fiancée Harriet Gist were scheduled to marry in late autumn, but Smith was a member of Co. H. Harriet joined him in Laurel where they quickly arranged a June 30th
wedding. Their license came from Howard County and a minister married them on “a Pullman car standing just inside the border line of Howard county.” A picture of the happy couple plus their wedding announcement appeared on the front page of the Democratic Advocate July 7th.

Several weeks after he arrived in Texas, Smith sent his bride someone’s humorous poem describing conditions along the Mexican border which read in part:

The rattlesnake bites you, the scorpion stings,
The mosquitoes delight with their buzzing wings,
The sand bees prevail and so do the ants,
And those who sit down need halfsoles on their pants.

Within days of the group’s departure, a local committee was formed to help the Guardsmen and their families manage while they were away. Its purpose was to “care for the interests, business and otherwise of the soldiers, to keep a record of the work of Co. H and its individual members, to bring home their bodies if any of them should die or be killed in battle and to provide for the support of their families during their absence.” This help from the home front must have been welcome, especially as the soldiers’ first paychecks were very slow to reach them. 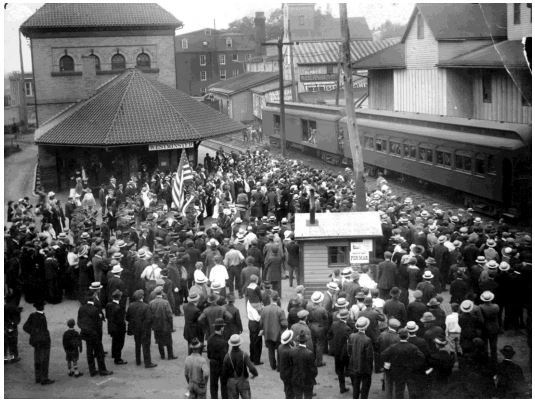 Photo credit: Historical Society of Carroll County
Photo caption: A huge crowd gathered at the Western Maryland Railroad station in Westminster on June 21, 1916, to send off the members of Co. H, First Infantry, Maryland National Guard and the First Infantry Band to serve along the U.S.-Mexico border against incursions by Pancho Villa.