Two weeks ago, “Carroll’s Yesteryears” left the local men of Company H, First Regiment, Maryland National Guard, at Eagle Pass, Texas, along the Rio Grande in July 1916. Their mission was to “put a stop to the deeds of pillage and rapine perpetrated by lawless Mexicans” along the U.S.-Mexico border.

During the three and a half months the soldiers spent at Eagle Pass (southwest of San Antonio) and at a huge ranch twenty miles further along the Rio Grande, they wrote fascinating letters home detailing their daily lives. Initially, everyone mentioned how hot it was. Although it hadn’t rained for four months, just after Company H settled into camp there were violent rainstorms and flooding, followed by an August hurricane. The men lived in tents. Fortunately, they weren’t required to work during the heat of the day. They had access to showers, plenty of food, daily mail delivery, and even telephones at one point. Paul Wimert, a member of the First Regiment Band, wrote, “We don’t mind the heat now – we are getting used to it. I am getting fat and my mustache is coming along alright.”

Drills were part of the routine in addition to patrolling the Rio Grande. One of Cpl. Reginald Stoner’s letters mentioned the “dreary hours” from midnight until 3 a.m. walking along the river bank. Another soldier saw things differently. “The moon was shining brightly on the swift current of the Rio Grande and at several points we could see down for about a mile, and the myriad of sparkling gems bobbing about as it were, on the water was indeed a sight beautiful to behold, and one I will never forget.” He also enjoyed the music drifting across the river from the
Mexican town of Piedras Negras during the wee hours of the night – sounds from mandolins, guitars, and banjos.
H. G. Berwager wrote, “This country is very healthful and we have practically no sickness in the regiment,” but he also mentioned the many Mexican children who visited the army camp to collect left-over food. They were emaciated and “with scarcely enough clothing to cover their little thin forms.” From his standpoint, “Everything is very quiet and peaceful here and across the river.”

When off duty, many men hunted rattlesnakes and turned their dried skins into belts. Others hunted rabbits and looked forward to legally hunting deer around the camp. Fellows from other Maryland units even did a bit of bronco busting. Robert Long claimed to have heard “animals prowling and howling near him continually” while on guard duty, but his companions decided he was dreaming as they had seen nothing but snakes, horned toads, and lizards.
During the conflict, the U.S. had tens of thousands of troops stationed along the border and operating in northern Mexico. Pancho Villa and other marauders, heavily outnumbered, soon posed little threat. Company H returned home to a tremendous welcome in early November 1916. There had been no deaths or casualties. Joseph Yingling wrote of his experience, “After years to come, a recollection of our visit here will be very pleasant memories.” 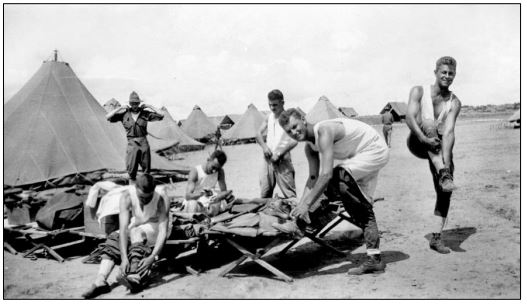 Photo credit: Historical Society of Carroll County
Photo caption: This snapshot of some men from Company H at their camp at Eagle Pass, Texas, in the summer of 1916 was labeled, “Getting ready to beat it to the shower.” In the background are the men’s tents. Note also the flat landscape.