22 September 2019 – Remembering the War of 1812 “Old Defenders,” many of whom hailed from Carroll County

22 September 2019 – Remembering the War of 1812 “Old Defenders,” many of whom hailed from Carroll County

Carroll Yesteryears
22 September 2019
Remembering the War of 1812 “Old Defenders,” many of whom hailed from Carroll County
By David Buie

Last weekend marked the 205th anniversary of the British bombardment of Ft. McHenry during the War of 1812. It was that event which inspired Francis Scott Key, born in the part of Frederick County that would later become Carroll County, to write “The Star-Spangled Banner.” Although Key’s is the most recognizable name associated with that momentous event, other local residents also participated in the defense of Baltimore during the late summer of 1814. These men were often known and revered as the “Old Defenders” later in their lives. Among them was Jacob Reese (1797-1872) who served as a musician in Capt. William Blizzard’s Company, 15th Regiment of Maryland Militia. When Jacob died in 1872, his obituary in Westminster’s Democratic Advocate newspaper noted, “Mr. Reese was one of the Defenders of Baltimore, during the attack of the British upon that city, in 1814, and although only about sixteen years of age, he bore his share in that conflict.”

Like Reese, a surprising number of Carroll County men served during the War of 1812, most of them during the August/September period of 1814 with which we are familiar. We know some of the soldiers gathered in southeastern Carroll County at a place called “The Forks” where the two branches of the Patapsco River met and then marched on to Baltimore. Men with names still found locally—Blizzard, Arbaugh, Farver, Gorsuch, Shipley, Buckingham, Barnhart, Frizzell, Hobbs, Fowble, Harman, Warfield, and Hesson—joined militia companies to fight between the
end of July and the closing days of September. Information about the participation of nearly 3,000 Frederick County veterans can be found in Frederick County Militia in the War of 1812 by Sallie A. Mallick and F. Edward Wright. The
authors examined surviving muster and pay rolls and searched applications for bounty land and pensions. The pension applications in particular often yielded a wealth of information about each veteran’s military service, later activities, and family history. The book also contains an overview of the Frederick County militia during the war and useful appendices of information from the Adjutant General Papers, Commission Books, and the Muster Rolls of active units.

In observance of Defenders” Day, a state holiday, the Friends of Ft. McHenry sponsored “The Star-Spangled Banner Weekend” honoring Baltimore’s oldest holiday commemorating the bombardment of Fort McHenry and the writing of what became America’s national anthem. Events this year began Friday, September 13, with an evening ceremonial procession of War of 1812 reenactors from the 1793 Star-Spangled Banner Flag House near Little Italy to the Inner
Harbor, followed by a ceremony at the amphitheater. After the ceremony the reenactors boarded sailing vessels and took the 30’x 42’ replica flag to Fort McHenry. Activities on Saturday and Sunday included children’s programs, military encampments/demonstrations, and a “privateer’s auction” of “captured goods.” Saturday evening’s program featured a concert, a tactical demonstration of musket firing with participating reenactors from across the country, a symbolic ship-to-shore bombardment, and an impressive firework show.

Next year’s observance may prove to be one of the most impressive to date with the scheduled arrival of tall ships in the Inner Harbor. David Buie is a Taneytown resident who has a passion for Carroll County and its place in
history. 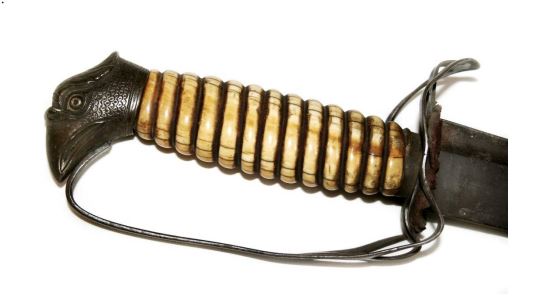 Photo credit: Courtesy of the Historical Society of Carroll County
Photo Caption: The handle of the sword owned by Major Benjamin Gorsuch during his service
in the War of 1812. Gorsuch initially served as captain of a Rifle Company in Beale Randall’s
Rifle Battalion. At the end of the war, he commanded a company in the 2nd Regiment, 11th
Brigade, Maryland Infantry.