How did you spend your summer? Chances are your activities were rather different from those of the 1880s or 1890s. Enjoyable articles appear in old newspapers describing how our ancestors spent their leisure moments. One summer night the Jones family of nearby Libertytown threw a dance for dozens of their friends from Sykesville, Taneytown, Urbana, New Market and elsewhere. Japanese lanterns decorated their lawn while an orchestra from Frederick supplied music in their ballroom. At midnight the musicians paused so guests could enjoy fresh fruit, cake, and ice cream; then dancing resumed until 4 a.m. With no air conditioning, the best time for dancing must have been late in the evening. Surely this was the event everyone talked about for days afterward. Maud and Minnie Hilterbrick invited over forty of their young friends to a watermelon party at their father’s home near Taneytown on a summer evening. There was no dancing, just “social games, vocal and instrumental music and conversation” until midnight. Then the guests did “ample justice” to watermelons, cantaloupes, ice cream, cakes, and assorted other treats before departing at 1 a.m.

Today it is hard to believe that more than six thousand people sometimes attended the very popular camp meetings at Linwood, a village on the Western Maryland Railroad between New Windsor and Union Bridge. Attendees arrived on the train or came by horse and buggy, often staying for as much as a week to enjoy the religious services and social life. The nearby Church of God sponsored the event. One newspaper reported that “a gentleman from New Windsor
became so interested in some of the females present at camp on Sunday, that he went home on the train, forgetting that he had a team in the woods.” Twenty-five members of the Westminster Fishing Club spent about two weeks fishing for bass in the Potomac River while camped near Williamsport in Washington County. The names associated with this all-male retreat were those of Westminster’s more important families. Even 30 years after the last shot of the Civil War was fired, the Gettysburg battlefield continued to lure visitors from Carroll County and elsewhere. If you wanted to treat your summer guests to a tour, Reuben Saylor of Johnsville, Frederick County, could furnish teams for the trip. Young people from Porters, a village on Liberty Road just west of Eldersburg, spent a delightful evening on a “straw ride” through their neighborhood. Today we would call it a “hay ride.” The Porters newspaper correspondent wrote, “Sounds of bells, blowing of horns, merry peals of laughter from some two dozen or more of gay young ladies, mingled with the coarser voices of several gentlemen who proved to be a number of city boarders who are sojourning at Mrs. Brice Shipley’s, together with several of the beaux and belles of the vicinity.” One of the ladies was quoted, “To say we enjoyed ourselves would be putting it mildly; it was just grand.” Bicycle rides, baseball games, horse-back parties, jousting tournaments, visits to the county fair – these were other summer activities of long ago and many didn’t cost a lot of money. 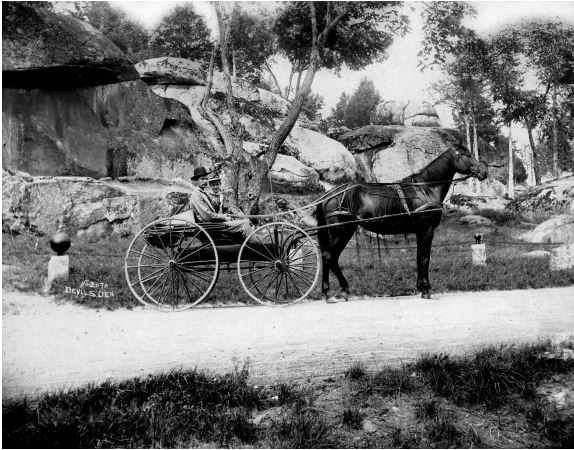 Image source: Historical Society of Carroll County
Image caption: For residents of northern Carroll County it didn’t take long to reach Gettysburg
and enjoy a tour of the battlefield. As early as 1864, concerned citizens established the
Gettysburg Battlefield Memorial Association to preserve the site as a memorial to the Union
Army that fought there. It became a national military park in 1895.