The year 2020 is fast approaching and it promises to be an important one, not just in American politics, but because it marks the 100th anniversary of the ratification of the 19th Amendment to the United States Constitution. Women finally won the right to vote throughout the entire country in 1920 and few in Carroll County were more pleased than Mary Bostwick Shellman, probably this county’s greatest crusader for many important causes, not just women’s suffrage. You are certain to hear more about suffrage in the coming months, but let’s focus on another of Mary’s important contributions to history—that of remembering the soldiers who fought and died for the United
States. As a 14-year-old, Shellman (1849-1938) recognized the wounds being created by the Civil War. Although an ardent Union supporter, her older sister had Southern sympathies. She watched both Union and Confederate troops march through Westminster, her home town. During the Gettysburg campaign, she “with other children scraped lint for the temporary hospitals – I sat and fanned the wounded brought down from Gettysburg….”

When the idea of creating Memorial Day (originally called Decoration Day) was first proposed after the war ended, she “took that on as a sacred duty” in 1868 and never lost sight of its importance to her dying day, even organizing a Memorial Day event in 1938 in the tiny town on the Texas coast where she spent her last years. Mary’s intense patriotism was well-known due to her involvement in organizations such as the Grand Army of the Republic (G.A.R.) and its auxiliary, the Women’s Relief Corps. Two of Maryland’s G.A.R. posts named her an “Adopted Comrade” for the work she did on behalf of veterans. She attended national encampments of the G.A.R. where other groups also honored her. The Old 6th Massachusetts Veterans Association named her an “Adopted Daughter.” That was
the regiment attacked as it marched through Baltimore in 1861 when Lincoln called for federal troops after the attack on Fort Sumpter that began the Civil War. Company B of the 5th Wisconsin Volunteers named her a “Little Sister” in 1890 although by that time she was a grown woman. Few could overlook her efforts to champion veterans’ causes, efforts which eventually included World War I veterans.

One of the areas where Mary’s patriotism shone brightest was in her poetry. In 1888 she read a poem she’d written for a Memorial Day event at Antietam Cemetery where Union soldiers are buried. In 1900 she wrote the words to a hymn sung at Arlington National Cemetery. Her earliest poems were decidedly pro-Union. Below is one stanza from “Honor to Whom Honor is Due” written in 1879.

We dare not divide the honors
Of Decoration Day,
Our laurels are for the blue-coats,
Our tears alone for the gray.

Twenty years later she recognized the huge sacrifices made by veterans on both sides. While returning from a Confederate veterans’ encampment in Charleston, SC, she made friends with former Confederates on the train ride back to Washington. As a token of friendship, they presented her with the palmetto reunion souvenir accompanying this article which the Historical Society owns. 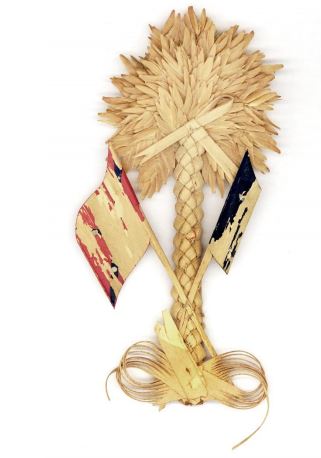 Image credit: Historical Society of Carroll County
Image caption: Mary Shellman treasured this souvenir given to her by Confederate veterans after she attended a Confederate veterans’ encampment in Charleston, SC, in 1899. Many Maryland men fought for the Confederacy as well as the Union.