Searching through the Library of Congress Prints & Photographs Online Catalog, the Historical Society’s current student intern, Joshua Friedman, discovered an important local Civil War image never seen before. It is part of the Library of Congress’ Liljenquist Family Collection of Civil War Photographs. The hand-colored tintype of Winfield Scott Drach and Jesse Barnes was sent from Maryland Heights on March 14, 1863, when the friends were recruits from New Windsor in Company F, 7th Maryland Volunteer Infantry. It is the earliest known photograph of Drach and likely the only one ever taken of Barnes, thought to be the soldier on the right.

Many men from the western portion of Carroll County enlisted in Company F in the summer of 1862, but participated in little to none of the heavy fighting at Antietam, Fredericksburg, Chancellorsville or Gettysburg as the war raged on through 1863. As spring began in 1864, Union General Ulysses Grant positioned his enormous Army of the Potomac for an effort to capture Richmond, Virginia, the capital of the Confederacy. This time Company F was front and center as fighting began on May 5 at what became known as the Battle of the Wilderness.

Twenty-three-year-old Jesse Barnes was captured, apparently uninjured, that first day. Twenty-two-year-old Winfield Drach received a serious leg wound three days later at the Battle of Laurel Hill/Spotsylvania and also was captured. Thus began five months of hell for both men that ended with the death of Barnes as a prisoner of war in Florence, South Carolina, on October 8, and a bittersweet return to Northern soil for Drach, who left one leg in a Confederate surgeon’s hospital. Drach was paroled September 12 at Annapolis Junction and spent at least seven more months in Union hospitals.

Little attention would be paid to the death of handsome Jesse Barnes except by his father, Alfred, a younger sister, brother and friends if it were not for finding a small packet of nine love letters from Kate Woods hidden in the wall of his family home over a century later. Kate, also a New Windsor resident, was several years younger than Jesse and evidently fond of him. The letters were written over the course of Jesse’s first year in the army, October 1862 through September 1863. How he felt about her is unknown, although he probably wouldn’t have saved them if they meant nothing. How they ended up in the family home is also unknown. Perhaps he brought them home and hid them while on furlough. Men sent to Andersonville Prison in Georgia and then moved to another camp in South Carolina probably had no mementos from home when they died. Whether Jesse’s name and death date exist on any memorial is unknown.

Kate Woods moved to Gettysburg with her family later in the 1860s and married. Her letters remained in the wall of Alfred Barnes’ house until uncovered during large-scale restoration was done on it because it may have belonged to Robert Strawbridge, the famous Methodist preacher. The letters are now the property of the New Windsor Heritage Museum. 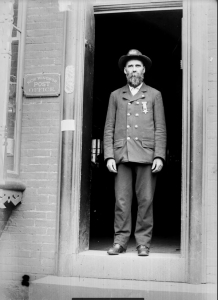 Winfield Scott Drach fared far better than his friend Jesse in spite of the horrors of losing a leg and spending months in Confederate, then Union hospitals. He married, became New Windsor’s postmaster and also served as Chief Burgess (mayor). Much of his later life probably centered around his church (St. Luke’s Lutheran), his community and the Burns Grand Army of the Republic Post in Westminster. The camaraderie afforded by G.A.R. activities must have meant a great deal to him. He passed away in 1913, just shy of his 71st birthday, honored by family, friends and members of his G.A.R. post.

The tintype of Drach and Barnes is noteworthy for several reasons. It is in excellent condition in its leather case and went undiscovered by historians from Carroll County for nearly 160 years. Now it adds to the stories of two young men who represent the sacrifices made during the Civil War to preserve the Union.

Above right: Winfield Scott Drach in his Grand Army of the Republic uniform standing in the door of the New Windsor Post Office where he served as Postmaster. Courtesy of New Windsor Heritage Museum