12 April 2020 – Complaints About Politics, Politicians Were Alive and Well in Late 1700s

12 April 2020 – Complaints About Politics, Politicians Were Alive and Well in Late 1700s

Complaints About Politics, Politicians Were Alive and Well in Late 1700s

You’ve heard it before: “Fake News!” Complaints about “Special Interests” or “too much money in politics,” with allegations that the wealthy are attempting to “buy the election.”  Why are politicians saying such horrible things about each other?  Think this is about this year’s election?  Hardly.  These were complaints back in the founding era, and right here in what is now Carroll County.

Yes, you heard that right.  What we now call “Fake News” was as much a part of politics in the late 1700s and early 1800s as it is now.  When you shake your head as your social media feed blows up about the latest “hoax,” rest assured – these exact same issues have been part of our country’s discourse since the beginning.

Divergent political interests became apparent as early as 1776.  Although political parties were not spelled out in our nation’s founding documents, the need to sway voters in the new republic spurred the development of competing political blocs.

Political discourse in those days was strained, to say the least – both nationally and here in Maryland. Republicans noted in a Frederick newspaper “incontestable proof of the designs of this Federal Faction to overturn our present form of Government, and build a Monarchy on its ruins.”  In the Frederick-Town Herald, a Federalist paper, a piece published June 19, 1802, mocked Thomas Jefferson’s promise “to restore harmony to social intercourse” and to consider Americans as “all Federalists and all Republicans,” declaring that “[i]nstead of the smiling aspect of harmony we behold the Demon of Discord in all his horrors.”  Sound familiar?

After brothers Andrew and David Shriver, Jr. founded Union Mills in 1797, the Shriver family became immersed in this barbed political discourse.  The Shrivers and their father, David Shriver, Sr., descendants of German immigrants, were leaders of a powerful German political network in the area.  The Shrivers worked hard to shape popular opinion on issues of the day.

A large part of the population in what is now Carroll County were German-speaking farmers who depended on Frederick newspapers to get their news.  Some of the most widely read newspapers in Frederick were published by Mathias Bartgis who had established the first broadsheet in the area in 1786.

In 1802 another Shriver brother, Abraham, collaborated with Bartgis to publish the Hornet – a newspaper dedicated to the Republican cause.  Knowing the audience, Bartgis published the paper in both English and German.  Abraham Shriver wrote what was essentially the opinion page and had his brother Andrew translate the pieces into German.  The paper became known for its hard-hitting political content, with the slogan “To true Republicans I will sing, but aristocrats shall feel my sting!”  Federalists complained that the German-language materials published by Bartgis were different from the English ones, “containing the most barefaced and outrageous falsehoods.”

The Frederick newspapers in that era pulled no punches.  In June, 1802, the Herald flatly called the local Republicans “traitors,” saying “the man who attempts to deceive the people. . . poisons the fountains of Government, which instead of nourishing into strength, destroys the health and life of the body politic.” A few months later, the Herald called Andrew Shriver (by then a levy court judge) “the democratic dictator of the Levy Court.”

Abraham Shriver’s relationship with Bartgis soured as the political attacks the Shrivers sought to publish in the Hornet became more extreme.  In 1803, Abraham hitched his rhetorical wagon to a new publisher, John Colvin.  Colvin’s paper, the Republican Advocate, published the Shrivers’ political rhetoric during the 1803 election.

In the fall of 1803, the Shriver brothers’ father, David Shriver, Sr., was on the ballot for House of Delegates with a slate of other Republicans running against a group of Federalists that included Roger Brooke Taney.  Taney, who eventually would become Attorney General and then Chief Justice of the United States Supreme Court, had recently moved to Frederick County and was making his first attempt at elected office.  The Republicans attacked him throughout the campaign.

Name-calling was common, with Republicans dubbing Taney a “bladder of wind.”  Other attacks were intended to stir the sentiments of Germans in the area.  Just a few weeks before the election, the Advocate accused Taney of leading a “cavalcade” of Federalists into Frederick “in a most riotous manner” where at the Court House they “through intoxication or design vomited forth a thousand curses against the republicans and violently assaulted and most shamelessly proceeded to beat a respectable young German.”

The 1803 election featured unvarnished class warfare in the local papers.  The Advocate chastised the “rich and purse-proud aristocrats” who were attempting to “influence or over-awe the Republicans, who in general consist of mechanics, plain Dutch farmers, and men in middling stations in life.”

Just days before the 1803 election, Maryland’s first by written ballot, the Advocate accused Charles Carroll of Carrollton, “that hoary headed aristocrat,” of attempting to sway votes in favor of the Federalist candidates including Roger Brooke Taney.  The piece continued, “[s]hall the people be dictated to by this lordly nabob. . . [h]as he more virtue, more honor, or more honesty, than a good, industrious farmer?  Dares he, with his British monarchical and artistocratical politics, come into Frederick county to cajole, to swindle the people out of their rights. . . Citizens of Frederick county, set Charles Carroll at defiance.”

And that they did.  The Republicans won the election in 1803, proudly crowing, “The neck of Federalism is broken in Frederick County and the beast is dying meanwhile it groans tremendously.”

No doubt there were calls to “restore harmony” to political discussion back in the early 1800s.  Such wishful thinking still echoes over 200 years later. 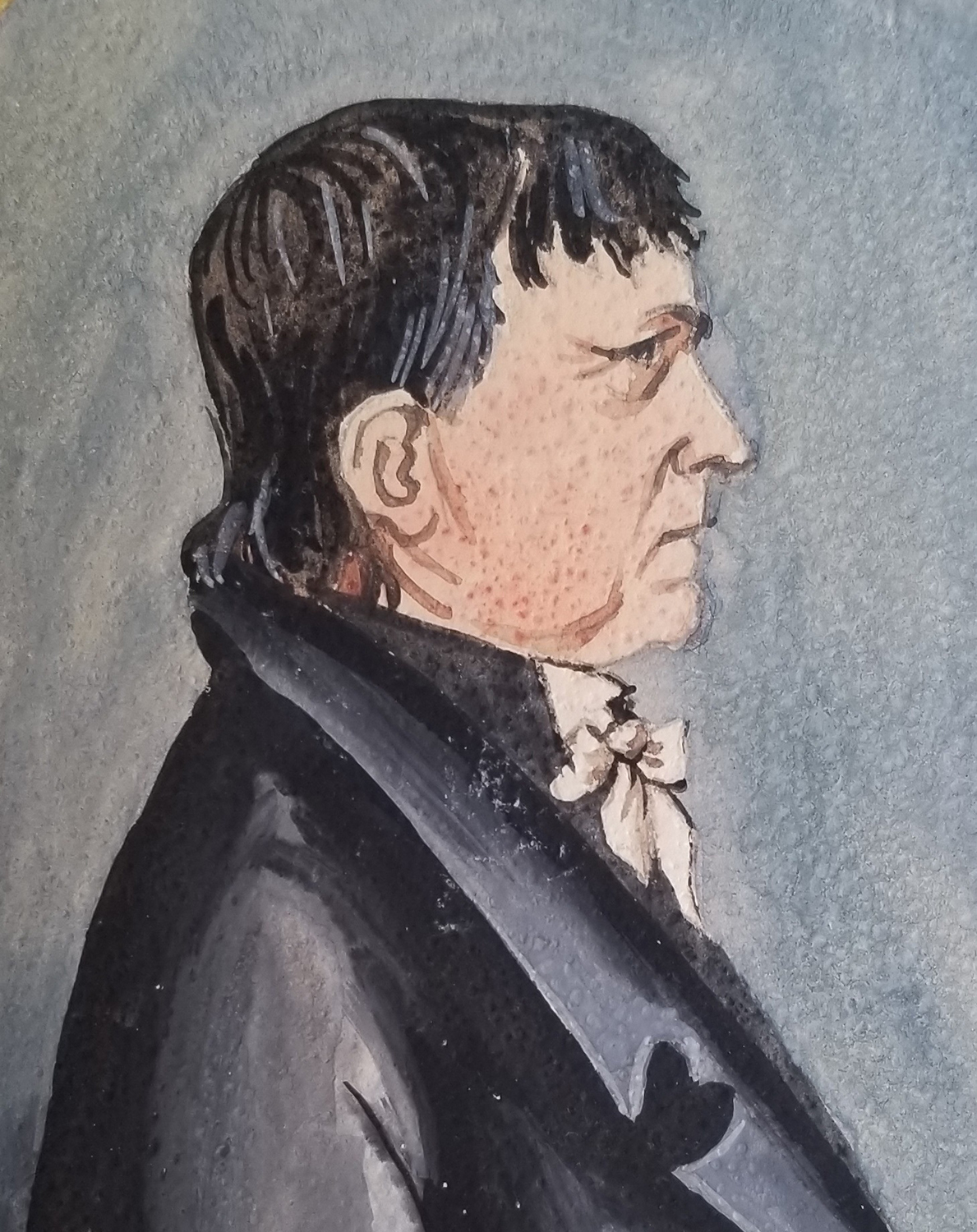 IMAGE #1  David Shriver, Sr. (1735-1826).  A member of Maryland’s 1776 Constitutional Convention, Shriver owned a farm west of Westminster and served in elected office over a period of almost 30 years. Shriver was a leader of Maryland’s German-speaking population and supporter of Thomas Jefferson’s Republican party. (Image courtesy of the author) 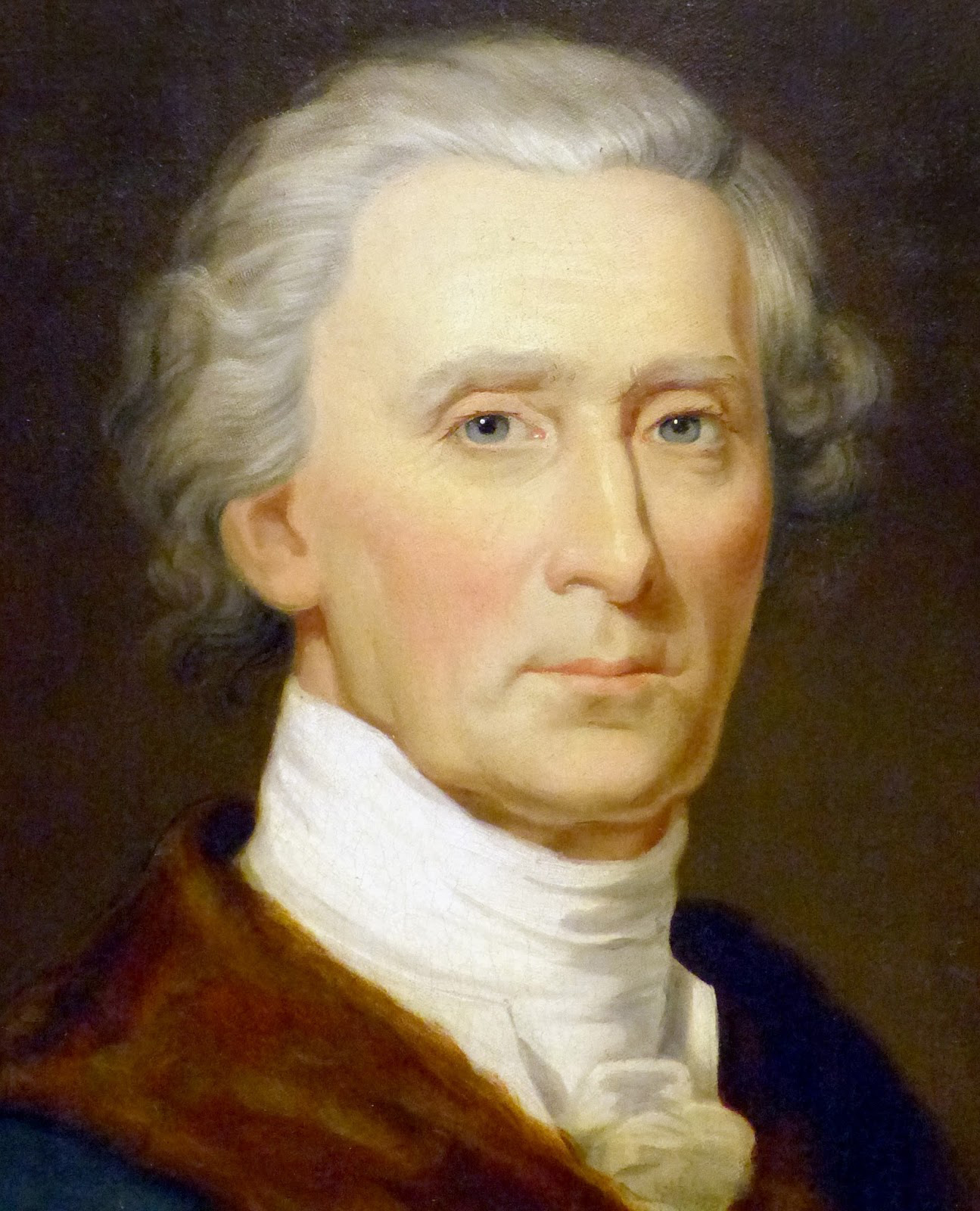 IMAGE #2   Charles Carroll of Carrollton (1737-1832) by Michael Laty. a signer of the Declaration of Independence, a U.S. Senator, and namesake for Carroll County, Carroll was a Federalist who was attacked by local Jeffersonian Republicans as an aristocrat. (Wikimedia Commons)