Carroll County and the Great War

Carroll County and the Great War

The United States entered the Great War on April 6, 1917. Nearly 1,000 Carroll County men and women served in uniform and the vast majority of civilians supported the war effort on the home front. Of these, 36 servicemen paid the ultimate sacrifice.

While the European war raged throughout 1914, Americans were more concerned with a crisis nearer to home. A bloody Mexican civil war threatened stability along the border and led to a lengthy occupation of Vera Cruz in 1914. Matters quickly escalated after a March 9, 1916 raid by bandit Pancho Villa on Columbus, New Mexico. Brigadier General John J. Pershing was ordered to command a 12,000-man force to pursue Villa and stop any further raids. President Wilson called up the National Guard and the Maryland National Guard was sent to the border. The 1st Maryland Infantry entrained for Texas on June 30, 1916, with local men commanded by Captain John N. Weigle of Co. H and Drum Major Harry M. Kimmey of the regimental band.

The unit spent the summer and fall at Eagle Pass, Texas, guarding the bridge across the Rio Grande. Fortunately, the Mexican Border Crisis did not lead to war and the men returned to Westminster in early November 1916. 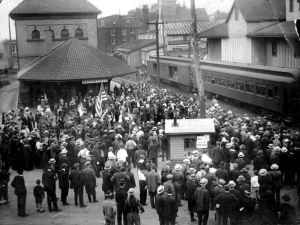 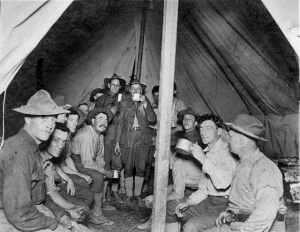 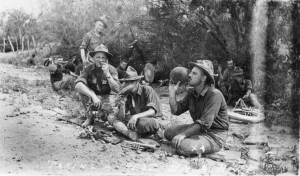 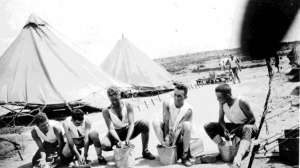 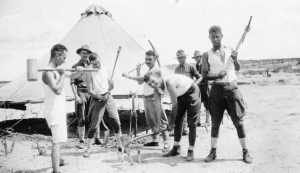 Snap shots of life on the Mexican border sent by the men of Company H to their loved ones, 1916.
– Gifts of Anna Heltibridle and Betty Smith Yingling –

America declared war on Germany and her allies on April 6, 1917. The Maryland National Guard was federalized and the 1st Maryland Infantry joined other Maryland and Virginia guardsmen at Camp McClellan in Anniston, Alabama, to form the 29th Division. A draft was instituted for the first time since the Civil War and all men between the ages of 21 and 31 became eligible for military service. Two subsequent selective service acts would require all men between the ages of 18 and 45 to register. 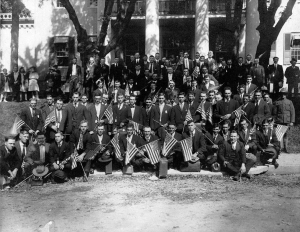 Home front war support activities were coordinated by the Carroll County Council of Defense headed by Westminster physician Dr. Henry M. Fitzhugh. The Council encouraged public support of the war effort through enlistment, volunteerism, productivity, the purchase of war bonds and by war-related charitable contributions. The Council was also charged with helping to eliminate idleness, waste, anti-American sentiments and any other activity that did not aid the war effort. 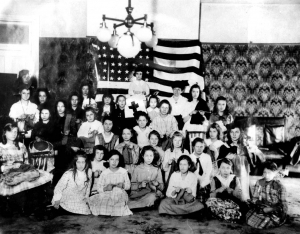 Stereographs were a major source of public information and entertainment from the mid-19th century through the first quarter of the 20th century. Stereographs consist of two nearly-identical images that were taken by a specialized camera having two lenses about 2.5 inches apart (approximately the space between a person’s eyes). When viewed through a pair of lenses set at that same distance, the result is the illusion of a three-dimensional picture.

In the 19th century the technology for printing photographs in newspapers, magazines, or books did not exist. Even publications such as Leslie’s Illustrated and Harper’s Weekly, which were noted for their vivid illustrations, relied on woodcuts produced from original drawings or photographs to fill their pages. The stereograph put photographic images of places and events directly into the public’s hands. People collected the cards and spent hours viewing all sorts of amazing scenes.

Many well-known 19th-century photographers produced significant bodies of work in stereograph form. Many of the best-known images of the Civil War – including Alexander Gardner’s famous scenes of the Antietam battlefield – were originally shot as stereographs.

In 1918, Keystone was one of the few publishers permitted to photograph World War I battlefields and military operations. The geographic locations included Germany, Italy, Turkey (Gallipoli), the Balkans (Serbia), and the United States. However, military activities in Belgium and on the French front are most strongly represented, comprising over one third of the collection. Starting in 1923, Keystone issued these sets in groups of 75, 100, 200, and 300 cards. [This set has 100 cards.] The sets were in print for 10 years. 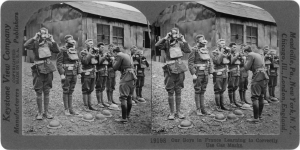 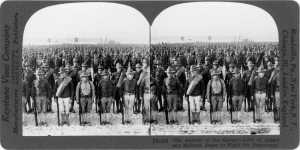 World War I is often forgotten today but it changed the world. Empires collapsed and new nations were born. Maps of the Middle East and Africa were redrawn and Iraq, Syria, Jordan, Lebanon, and Palestine were created. Ukraine, the Baltic nations, Poland, Hungary, and others were reshaped. Today’s conflicts in the Middle East and in Eastern Europe can be traced to World War I. The Second World War and the Cold War were results. The war also forever changed the lives of the men and women who served “Over There.” 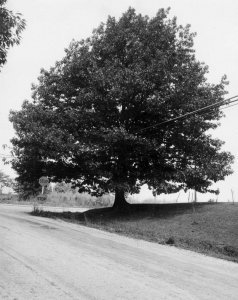 Jerome L. Day Tree, Westminster
Carroll County held a veterans parade in Westminster on July 4, 1919. They also dedicated a series of memorial oak trees planted along Baltimore Pike in honor of each man who had died in service. The “living oaks” survived for nearly three- quarters of a century as a testament to those who lost their lives a century ago in the Great War for Civilization.

Since the start of the war in 1914, the Red Cross had been providing relief to worn-torn European countries. Initially it supplied doctors, nurses, and medical supplies on the SS Red Cross or Mercy Ship. Later, women recruited through the Women’s Bureau of the Red Cross produced hospital garments, surgical bandages, and refugee clothing. The Production Corps started in 1916 as a result of the early relief efforts. With the U.S. entry into the war, the Production Corps expanded. Other services developed during the war included hospital, camp, canteen, motor corps, and home services. But, the Production Corps was the most popular because it didn’t require any special training and tasks were accomplished quickly. Its major task was providing “comfort items” including soap and razors and hand-knitted socks and sweaters. Between 1917 and 1919, over 8 million women, along with many Junior Red Cross members, produced over 370 million relief articles for the Allied armed forces and civilians in Europe. Anna Galt of Taneytown wore this cap while volunteering for the Red Cross.

The citizens of Westminster presented each member of Company H, 1st Maryland Infantry and the regimental band with a bronze medal when they returned from the Mexican Border. The top bar identified the unit and the reverse is engraved with the recipient’s name: 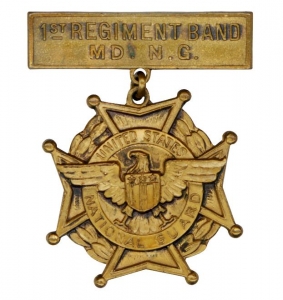 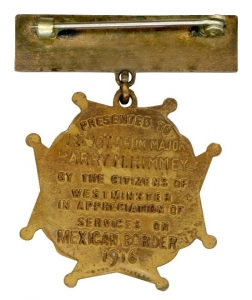 Congress authorized the award of the Mexican Border Service Medal in July 1918. The serial number “32752” stamped on the rim identifies the recipient as Sergeant Uriah Heltibridle, 1st Maryland Infantry Band of Westminster. 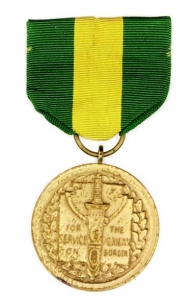 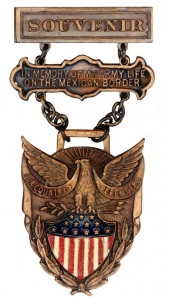 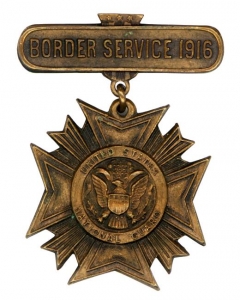 Each of the Allied Powers presented a similarly designed Victory Medal to their military personnel. The American version had clasps denoting overseas service or specific battles in which the recipient had participated.

Private First Class Charles Henry Cooper of Hampstead served with the 51st Company, 5th Marine Regiment, 2nd Division and received a medal with clasps for Meuse-Argonne, Aisne, Aisne-Marne, St. Mihiel, and Defensive Sector. Cooper placed the clasps on the back side of his medal and HSCC has not corrected his error. 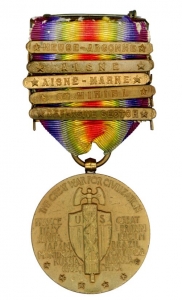 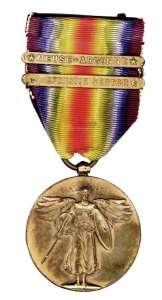 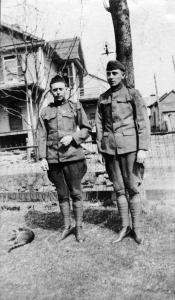 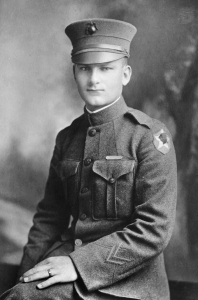 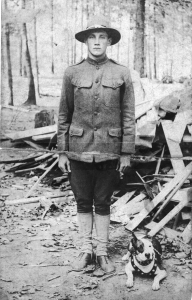 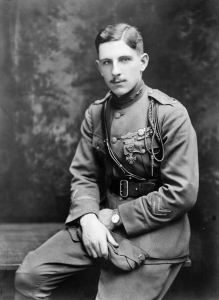