If jolly old St. Nick had seen the handsome mantel in the accompanying photo when he slid down the chimney of Jacob Yingling’s house in the early 1800s, he might have paused for a second glance before leaving presents for the family. It would have been one of the finest mantels he saw in the entire village of Westminster. Clifford Yingling, seen here beside the fireplace in the Historical Society’s Research Library at 210 East Main Street, descends from John Yingling (1748-1816) who settled in Westminster in the 18th century. Two of John’s sons, Jacob and Benjamin, were prominent and prosperous residents in the first half of the 19th century. Benjamin was Clifford’s direct ancestor.
Either John or Jacob built the handsome, Federal-style home on Lot #1 of Westminster as laid out by William Winchester. Jacob made his fortune as a tanner and operated his business behind the house which still stands at the corner of East Main Street and Manchester Avenue. Tanning, one of the town’s earliest industries, brought it considerable prosperity. Benjamin, a younger son, was involved in local politics, farming, painting, and decorating.
Someone who appreciated the finer things in life decided to install the above-mentioned mantel in the Yingling house along with a wall cupboard with handsome wood trim. An expert who examined the mantel felt it was likely carved by a Baltimore craftsman while the cupboard was carved locally.

Yinglings occupied the house until the 1870s or 1880s when it passed to the Reese family. The new owners made significant changes to the exterior and interior. They turned a Federal-style home into one of Westminster’s finer Second Empire buildings with a mansard roof and other embellishments. The Reeses obviously wanted a home in the latest architectural style. Looking around the town, you will see other examples of Second Empire architecture.
Big changes occurred on the inside as well. Out went the wooden mantel and cupboard. In came dark marble mantels over fireplaces. Luckily, the Reese family put the mantel and wall cupboard in storage – and there they remained almost 90 years. Dennis Blizzard discovered the beautiful woodwork after becoming the home’s new owner and
donated it to the Historical Society of Carroll County in 1978. The Society built a large addition to the Kimmey House at 210 East Main Street, originally known as the Shriver-Weybright Auditorium, and installed the mantel and cupboard there. The auditorium was the scene of dinners, meetings, and wedding receptions before being turned into an exhibition gallery for the Society’s collections. Today it houses the Society’s research library. There isn’t a working fireplace in the library, but the carved mantel looks stunning with an ornate mirror above it. Visitors to the library can enjoy this glimpse into Westminster’s early days when only a few homes could boast such elegant interior decoration.
The library is open to visitors as well as researchers Wednesday through Friday from noon until 4 p.m. and the 2nd and 4th Saturdays from 9 a.m. until noon. The Society’s gift shop is open Thursday through Saturday from 10 a.m. until 4 p.m.
Mary Ann Ashcraft is a library volunteer at the Historical Society of Carroll County. 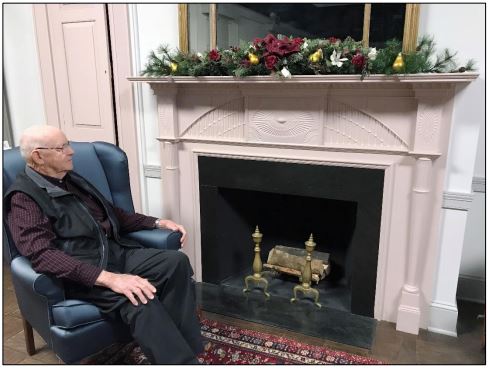 Image source: Submitted photo
Image caption: One of Westminster’s fine, early homes, the Yingling/Reese/Blizzard House, at 295 East Main Street, contained this handsomely carved mantel. It was donated to the Historical Society of Carroll County by Dennis Blizzard and installed in what is today the ShriverWeybright Research Library.