Adam Good is the most famous member of the Taneytown Good clan for his “George Washington slept here” story, but it is his brother, Jacob, who deserves better name recognition. It is not clear where Jacob lived in Taneytown, but the nature of some of his business activities and the references to him “of Taneytown” suggest that from about 1769 he did live in the town, most likely at Lot #1 on the Square, the site of the Central Hotel that is now office space/apartments.

It was Jacob who acted as the local agent for the selling of the town’s original 90 lots on behalf of Edward Diggs and Raphael Taney who lived in St. Mary’s County. In 1772 Jacob bought all the unsold lots, the ground rents, and almost all the unsold portion of the “Resurvey of Brothers
Agreement” tract surrounding the town – approximately 368 acres. Between that 1772 purchase and his 1783 death, he acquired an additional ten lots.
Because Taneytown was quite isolated from Frederick Town, it was hard to get news about the rest of the state. The only way citizens could communicate with each other was at public meetings, usually in taverns, churches, and mills. The Maryland General Assembly sponsored the creation of several taverns along main roads for use by the public. Communities used these taverns as a means of getting information from travelers or for public postings of new laws the General Assembly passed for the Royal Crown. Many would later serve as assembly points for the militia. Although there is no documentation to show the General Assembly sponsored the creation of the taverns located in Taneytown, we do know that Jacob and Adam Good were both active in the political arena and both were tavern owners.

In January 1775 Jacob was appointed to Frederick County’s “Committee for Observation” for the Middle District and, along with John McCallister, Samuel McFarren, and Abraham Key, was instructed to raise subscriptions to buy ammunition in Piney Creek Hundred and list residents who failed to contribute. Following the British evacuation of Boston in March 1776, General George Washington met with members of the Continental Congress to determine future military strategy. Faced with defending a considerable amount of territory from potential British operations, Washington
recommended forming a “Flying Camp,” which, in the military terminology of the day, referred to a mobile, strategic reserve of troops. Congress agreed, and on June 3, 1776, passed a resolution “that a Flying camp be immediately established in the middle colonies and that it consist of 10,000 men ….” The American military would evolve and adopt a ranking system with insignias based on the British model which consisted of privates, sergeants, lieutenants, captains, colonels, generals, and several now-obsolete ranks like coronet, subaltern, and ensign.  A month later Jacob Good was commissioned as a Captain in the “Company of Militia for the Flying Camp of Col. Charles Greenbury Griffith’s Battalion.”

The next article will examine Jacob’s military career, his participation in a military tribunal that will be later reflected upon in George Washington’s memoirs, and the circumstances surrounding his early death. Guest columnist David Buie is a Taneytown resident who has a passion for Carroll County and its place in history. 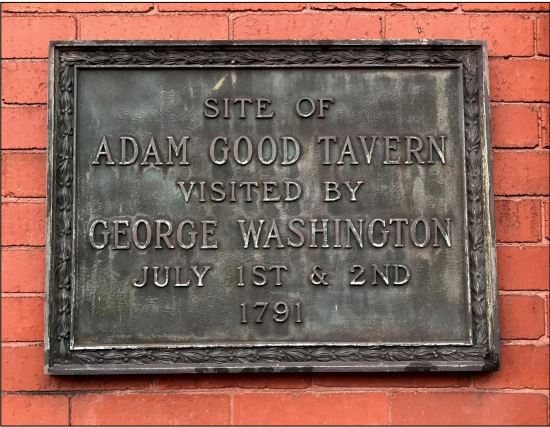 Image source: submitted photograph
Image caption: This plaque on the exterior of 6-8 Frederick Street near the center of Taneytown reminds passersby of the role of the Good family in American history.