The United States entered the Great War – World War I – on April 6, 1917. Nearly 1,000 Carroll County men and women served in uniform. Of these, 36 made the ultimate sacrifice.

Lloyd D. Schaeffer of Westminster enlisted in the Enlisted Reserve Corps as a private on August 22, 1917, and was sent to the School of Military Aeronautics at Princeton University for ground school. He was sent to France for additional training in November. He was honorably discharged from the Reserve Corps on June 23, 1918, and was commissioned as 1st Lieutenant, Air Service, the following day. He received final training as an observer at the 7th Aviation Instruction Center.

Due to the severe shortage of combat aircraft, Schaeffer and many other American aviators were assigned to French squadrons. Schaeffer was assigned to the 66 Escadrille, 12 Escadre, French Army, on July 7, 1918, and immediately saw action as an observer. His unit participated in bombing operations against German forces during the Aisne-Marne Campaign from July 18 to August 6. 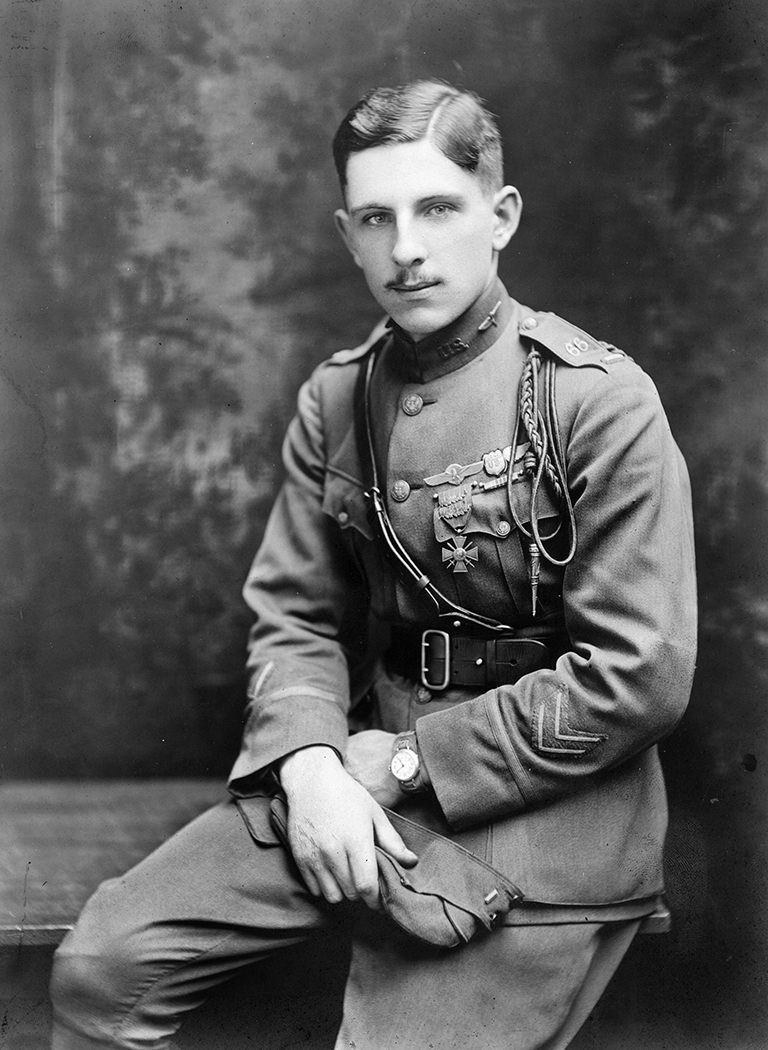 In a letter to his mother, Lloyd gave a vivid description of life at the front:

Just to tell you that while the big drive is on and we are fighting like h–, I am still all right. We go over the lines every day, once in the morning and again in the afternoon. Recently we patrolled “No Man’s Land” at a very low altitude and had an exciting battle with seven Fokker triplanes. I was fortunate again to get off without a scratch. It was an exciting trip. I never expected to see so much of the battle in an actual advance. There were about 100 machines in the bunch, and it seems we must have wiped out a division, as our bombs looked like rain falling, and it would seem impossible to escape them, we covered miles.
We had orders to bomb at a very low altitude this morning and carried a full load of bombs. Just before we reached the lines (we were then about 5,000 feet high) we ran into clouds, and while coming down we struck a Hun patrol and the best fight I have seen yet took place. We beat them off and kept on down, when we ran into anti-aircraft guns, which started to shoot, and shrapnel kept bursting all around us until we reached our object. We then returned to our base safely after we dropped tons of bombs on troops massed below, and arrived home with 30 holes in my plane.

Unfortunately, Lloyd’s good luck ran out. He was shot down and severely wounded on August 29 by a German aviator who may have belonged to Baron Manfred von Richthofen’s “flying Circus.” In September, he wrote to his family about his condition.

At last I can write you a few lines, and will try to tell you something about my case. As you know Fritz shot me down and made a pretty good job of it. In fact, he put five bullets through me, one through my ankle, one above my knee, one through my arm, and last but not least two through my back, which struck my shoulder blade and broke it, then tore up something inside of me, as it was an explosive. The doctors at once sewed me up, and I can tell you that no one thought I would live, but they sent me into Paris to an American Officers Hospital and after a few days they discovered the wounds in my back were starting to poison me, so they had to rip my back open, and every morning dress it and I suffer tortures of the damned. I have never suffered so much in all my life. I shot my man and forced another out of the fight, and I was fighting the famous “Traveling Circus” at that time, which is some feat. Will receive from the French a Palm or two, also the French Blesse Medal and am sure proud of it. The boys brought me the gold – our Escardre insignia with which I am tickled to death. I suppose I will be laid up for a few months yet, it has been sixteen days now since I was shot and believe me I can pull through. All my leg wounds are healed up, and my arm is doing well, but my back is still nasty. They are trying to save my arm, as it seems there is something broken that works my shoulder. The boys think I will be sent to the States to lecture, I don’t know. In a few days they are going to sew my back up, and the Lord knows that I can’t stand any more, as I am losing my nerve. I had the unique experience of seeing Paris in an ambulance as they rode me all through Paris coming into the hospital and it was so funny. Yesterday some of the officers and myself went for a short walk as I wanted to get my strength back in my leg and we walked the streets of Paris in pajamas. Gee, but we had lots of fun, and I am going to try to go to a theatre. I can move around fine as my legs are O.K. They seem to want me to move around and I feel so much better when I do. The hospital is in the Latin quarter of Paris, and we see some queer sights and enjoy the fine walks. The doctors say my physical condition was perfect and it is due to that I will pull through, so mother I have you to thank that you let me run as a kid and did not make a Sis of me. Well, good night dear folks, and don’t worry as I will be fine soon.

The French government presented the Croix de Guerre medal to Lt. Schaeffer on two occasions. The citation for the first award said “he showed the finest qualities of coolness, decision and courage. Attacked by a patrol of fifteen planes and seriously wounded at the beginning of the fight he nevertheless continued to fire on his adversaries forcing one of them to descend disabled.” He was later described as a “very brave observer who distinguished himself during the course of nine bombardments of the field of battle executed with admirable courage and sang-froid. Each time he brought back important information concerning the movements of the enemy. He was always ready, and always volunteered on all missions.”

Schaeffer’s Croix de Guerre would have been similar to this one in HSCC’s collection.

Schaeffer returned from France in December 1918 when he was transferred to the hospital at Camp Meade. He was discharged from the service in April 1919 but he bore the scars of his service for the rest of his life.