12 January 2014 – Everyone Pitched in During Butchering Time

12 January 2014 – Everyone Pitched in During Butchering Time

Everyone Pitched in During Butchering Time

Cold, frosty mornings, the smell of wood fires, squealing pigs and people hustling about – yep, it was butchering time! Butchering was both a work and social event for family, friends, and neighbors. Families picked a time between Thanksgiving and early March to begin the often week-long process of butchering pigs. Folks started cleaning kettles, sharpening knives and saws, and gathering the many implements, pots, and pans weeks before the butchering began.

Everyone had something to do. Men did the killing, scraping, removing the entrails and cutting the hams, shoulders, and roasts. Women cut sausage meat, lard and assisted in making “pudding” and scrapple. Children helped in many ways depending on their ages. The women also brought homemade cornbread, biscuits, eggs, bacons and other delicacies to be consumed by all the participants. Hard apple cider made an appearance at many butchering events.

The first task was killing the animal as humanely as possible. Afterward, the men used a block and tackle to lift the heavy, slaughtered pig by the hind legs to drain the blood; then the carcass was placed in a scalding tank filled with water heated to 150–160 degrees and soaked until the hair softened enough to be scraped from the hide. After removing the entrails, the “master” butcher carefully saved the organs. The “dressed” carcasses often hung for a couple of days before hams, shoulders, chops, and roasts were cut.

Everyone helped chop meat scraps into small pieces which were seasoned, ground, and stuffed into the cleaned small intestines (casings) for sausage. Hams, bacons (pork bellies), and often loins and chops were cured and smoked, or cut up and preserved in glass jars or cans for long-term storage. Green hickory, apple, or other fruit saplings were the most popular woods used in smoking.

Fat was trimmed, cubed and boiled in an iron kettle to make lard. The cubes of fat were cooked until they turned golden brown.  After the liquid lard was poured into cans and jars for storage, the left-over golden brown cubes, called “cracklings,” were scooped into a press and more lard squeezed out of them. Children were especially fond of a snack of salted cracklings.  Leaf lard, the fat found around a pig’s kidneys and loins, was usually rendered and packaged separately because it was prized by bakers for making moist, flaky piecrusts, among other dishes.

Head meat (jowls and tongues), plus livers, kidneys, and other scraps of meat were ground to make “pudding.” Scrapple is the term for pudding once it has been mixed with seasoning, cornmeal and flour, cooked, stirred, and then scooped into pans to cool. Families usually had their own favorite recipe for making scrapple.

Hams, shoulders, chops, loins, and roasts were properly marked for later distribution. Scrapple, sausage, and pudding were typically divided among all participants. It was, and still is, customary to give anyone involved in the butchering process some meat in appreciation for his or her help.

At the end, everyone helped with the cleanup, gathered his or her meat, and headed home for a well-deserved rest and lots of fresh meat! 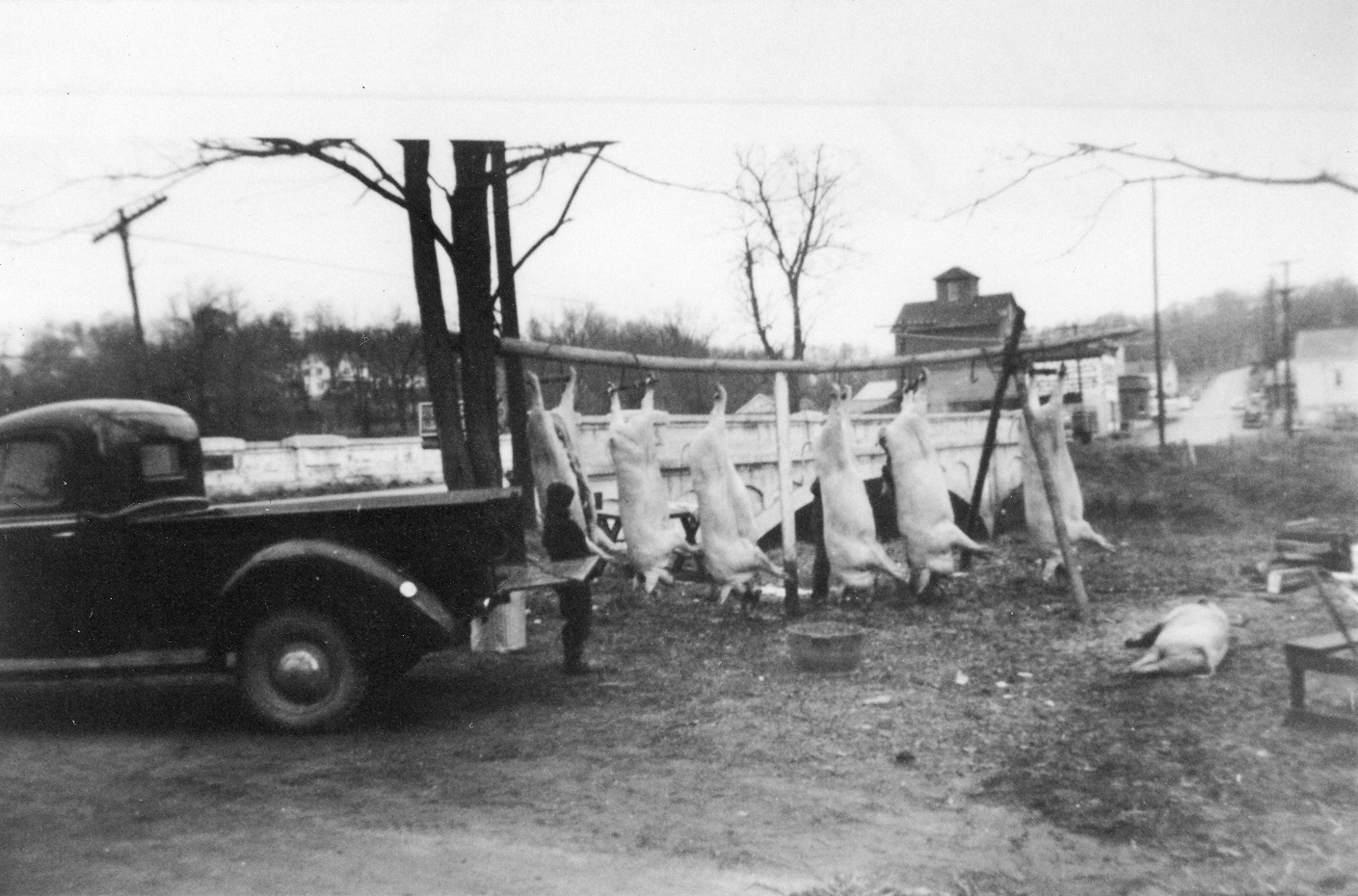 Photo caption: This 1940s photo of butchered pigs captured a community butchering event which took place in Woodbine.  The view is looking north on Woodbine Road near the Patapsco River.

Guest columnist John H. Foertschbeck, Sr. is a local history author. His books are available on the internet at www.germanjohnsworld.com.