Over the past four or five years, the bad economy has forced many Americans into bankruptcy.  That’s a process nobody wants to go through, but its effects are less devastating today than they were many years ago.

It’s hard to believe people in Carroll County were sent to prison in the 1840s if they couldn’t pay their debts, but it’s true.  Fortunately, most weren’t incarcerated for very long.  By the early 1800s, lawmakers in many states realized that their prisons were filled with people whose only offence was to be in debt, and they took steps to solve the problem.  Maryland passed an important law in 1805 which enabled debtors to be released from prison quickly if they agreed to certain conditions, although some prison time remained as part of the bankruptcy process.

Early in 1843, David Kuhn, a Carroll County constable, committed Daniel B____, a 27-year-old man with a wife and infant daughter, to prison for insolvency.  He had been married just two years, so this was not a very auspicious beginning to the marriage.

Daniel’s bankruptcy case was typical.  First he signed an indenture with a court-appointed trustee whose job was to act on behalf of the various creditors.  The trustee paid Daniel one dollar; in turn, Daniel relinquished “all [his] property real, personal and mixed of every nature and quality (excepting the necessary wearing apparel and bedding of himself and family).”  Anything he owned, claimed title to or had interest in was handed over to the trustee.  He was literally left with nothing but the clothes on his back.  Once all his property was surrendered and the trustee certified the delivery was complete, Daniel became a free man.  Anyone who wished to avoid extended prison time obviously agreed to the terms of the 1805 “Act for the Relief of Sundry Insolvent Debtors” and its later supplements which refined the whole bankruptcy process.

The next step was to have notices “inserted in some newspaper published in Westminster, for three months successively” so all the creditors could present their claims.  The trustee then negotiated with the creditors and used whatever property the debtor had surrendered to settle the claims.  The Democrat and Carroll County Republican paper published during the 1840s was filled with notices and petitions relating to dozens of insolvency cases.  Daniel B___ declared bankruptcy five times after 1843, the last in 1865.  According to a descendant, he may have died after the last declaration.  He can’t be found, but his wife and children ultimately moved to Baltimore City.

Some years ago, boxes containing Carroll County insolvency cases such as Daniel’s were sent to the Maryland State Archives, the repository for all kinds of official county documents, and members of the Carroll County Genealogical Society recently helped the Archives’ staff catalog them.   The cases are interesting to read.  They frequently include an original newspaper notice plus a list of creditors – usually neighbors of the debtor and sometimes local businesses.   Hard times befell many families and the cases include some well-known Carroll County names.  Even one of Francis Scott Key’s sons filed for bankruptcy!

Photo credit:  Microfilm at the Historical Society of Carroll County 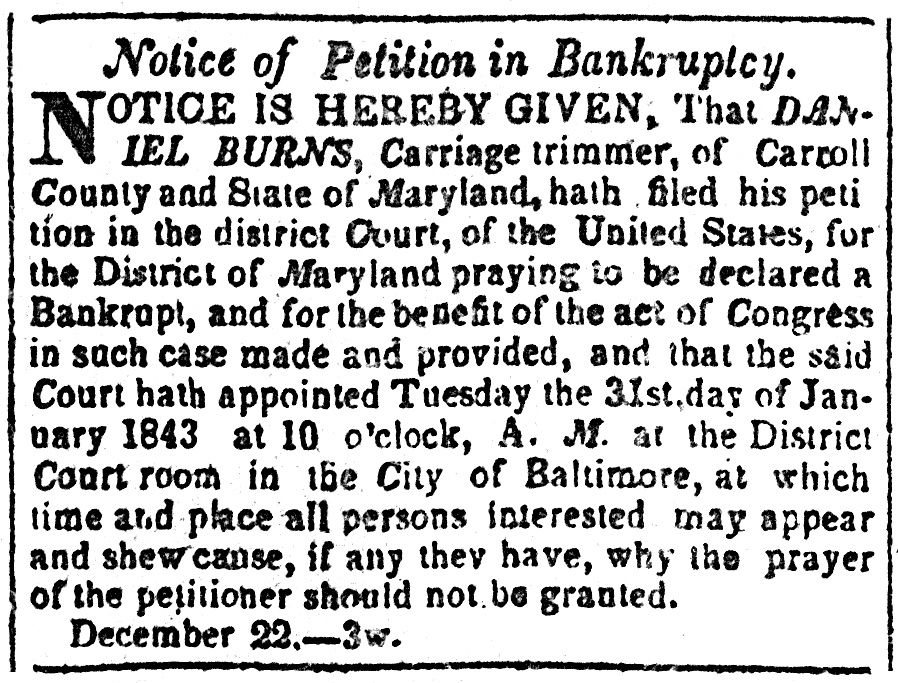 Photo caption:  This notice appeared in the Democrat and Carroll County Republican newspaper of January 5, 1843.  It is typical of the notices printed for individuals who declared bankruptcy and would have appeared for a period of three months to allow creditors time to file claims.