Carroll Veterinarian Cared for Horses in World War I

When the United States entered World War I, the Army needed more veterinarians to care for the tens of thousands of horses that would pull the guns, ammunition, ambulances, and supply wagons. In contrast to modern warfare, the horse was essential to military operations. Dr. George Martin Zinkham (1886-1964), newly-married and a recent graduate of Michigan’s Grand Rapids Veterinary College, put his large-animal veterinary practice in Carroll County on hold in 1917 and spent two years in the Army.

As Lieutenant Zinkham, he trained for war at Camp Lee in Petersburg, Virginia, and occasionally sent letters back to The Pilot newspaper in Union Bridge. His overseas unit, the 313th Field Artillery regiment, was part of the Blue Ridge 80th Division. It sailed for France in May 1918. Most of the enlisted men came from West Virginia and had some experience with horses.

The veterinary detachment that Zinkham led included a lieutenant, four farriers (horseshoers), and two privates. During the months of training at Camp Lee, Virginia, the unit relied on approximately 800 horses. When they arrived in France, they bought new horses. According to the History of the 313th Field Artillery, “After the first few days, during which the billets were put in shape, training began in earnest. French harness was issued and Lieutenants Zinkham, Adams and Shryock with one hundred forty (140) men and as many service records were sent after horses.”

During the Meuse-Argonne offensive in the fall of 1918, the horses and mules took a terrible beating. More than five hundred were killed in action, died of disease and exposure, or were evacuated. The casualty list for officers and enlisted men noted 56 wounded and 8 killed. For a doctor trained to care for animals as humanely as possible, the experience must have been harrowing. The unit’s Colonel summarized Dr. Zinkham’s service with these words, “An excellent veterinarian & efficient officer. Served throughout the Meuse-Argonne offensive and rendered most valuable & efficient service. Thoroughly dependable & always on the job.”

Discharged in June 1919, he was back in Carroll County by July and posted this advertisement in The Pilot, “Geo. M. Zinkham, D.V.M., Bark Hill, Md. Having returned from overseas I will locate in Bark Hill for the practice of veterinary medicine and surgery, on or about Monday, July 21. Will appreciate your work.”

“Doc” rarely spoke about his war experience with his family, but the history of his unit describes what his memories would have been: “the rumble of the guns along the road at night, the shuffling columns of infantry pass[ing] in the dark, the rain and mud, the utter fatigue of men and horses hauling ammunition night after night, the overwhelming roar of a great barrage, the whistle of approaching shells, the crackle of machine guns…”

After his death in 1964, his family found a trunk in the attic labeled “Capt. G. M. Zinkham.” Inside were his gas mask, a dough boy hat, his uniform with a large V on the pocket for Veterinary work, a pair of stirrups, riding boots, a riding crop, a bayonet, and two revolvers, along with other mementoes.  The war time was worth remembering after all.

This is the first of two columns on Dr. Zinkham.

Mary Ann Ashcraft is a library volunteer at the Historical Society of Carroll County.  Many thanks to Dr. William H. Zinkham and Helena Zinkham, son and granddaughter of the subject, for their assistance. 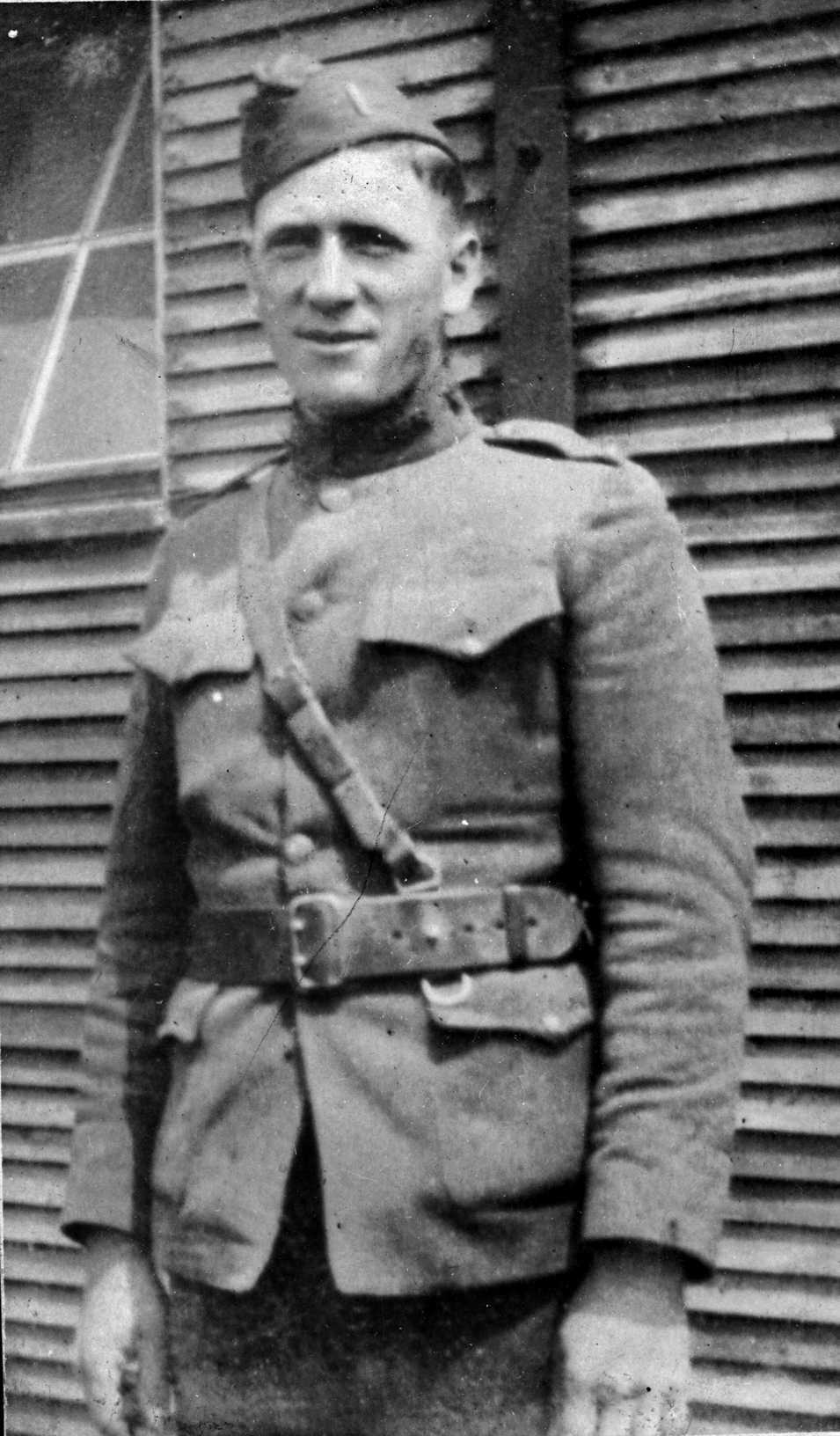 Photo caption: Dr. George Martin Zinkham, who practiced veterinary medicine in Carroll County for more than forty years, is seen here during training for military service in World War I.