As we’re all at home “social distancing,” we’re using modern technology to stay in touch in ways our ancestors could not even imagine. But previous generations had to resort to a simpler method – paper and pen. On Sept. 20, 1815, John Barnett, from Belfast, Ireland, wrote to Clotworthy Birnie, from whom he had received a letter the previous April. Birnie was a prosperous farmer near Taneytown who had emigrated from Belfast only five years earlier with his wife and eight children. But Barnett didn’t just write a typical letter. He wrote it criss-cross style.

Here is a page from Barnett’s letter: 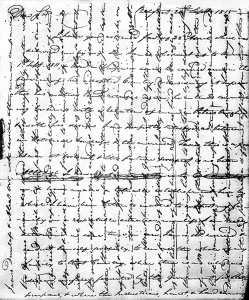 Confusing, isn’t it. So why write this way? The answer has to do with British postal regulations. Letters were charged according to the number of pages they contained and the distance they were to travel. Add a sheet and the cost doubled. Three pages and it tripled. Also, it was the letter’s recipient who paid the postage. So frugal letter writers saved paper and money.

Were you successful in reading the letter? If not, here is the transcription. Now, give it another try!

I have your esteemed favr of 22nd April which was delivered me by my son James, who went out to America 1st Sept. 1811, & lived in Virginia since he carried arms in the service of his adopted Country, & considering it superior to this his native land, returns again; he intends commencing business with a relation of mine in Petersburgh & with his designs I am perfectly satisfyd, as between an[?] Political bondage, & the encreasd Taxes, this [i.e., Belfast] is a poor place at present, & its future prospect is no better-Although I have yet a competence to live decently on, & have made a tolerable establishment here, by which I have been hither to enabled to support my family in a repectable situation, never[the]less I am really determined in some time, in case James shd succeed & conduct himself properly, to run over the whole of my family to that Country, where there is no religious discord, carefully fomented by the Government, for State purposes, & where the Industrious, honest, & hard earning . . .

James Dunlop & Alexr Orr, with several others, minor companies. the Grocers have also stood the Whip very badly, together with the spirit Merchants, in fact the desire of speculation, is to be rich too rapidly, had completely got the better of sound Judgment & prudence so far, as to drive Men of weak minds with too much avarice, altogether out of their depth, so that when the mania of speculation ceased, & trade returned to its natural state, they were not able to weather the Storm, the forced system after, & their own folly had involved them in-In Politicks, we are all in this place, at present, as tame and submissive as gelt-Cats, our Wise & benevolent Government, aided by the magnanimous allies & friends of Brittain, all Justly intitled to the appellation of the liberators of the human race, as Lord Castbereagh[?] calls them, are now giving liberty to the French, by depriving them of a Man they like [i.e., Napolean], the greatest who ever appear’d upon the Earth in our days, & forcing upon them a weak imbecile old Dotard [Louis X IV], both in body & intellect, this however like every excess will in the end produce a different effect, from what these

To learn more about the history of mail, read the Spring 2015 issue of the Carroll History Journal; it features articles about criss-cross letters and World War II V-mail.