During the 19th century the citizens of Carroll County went about their daily chores relatively isolated from the world. Lack of good transportation meant that each small town became the center for social events and other activities, including church, school, and seasonal celebrations. The system of communications was also self-contained, and many of Carroll County’s towns had one local newspaper to serve the community’s needs. In Taneytown and the surrounding area, the local newspaper was The Carroll Record. The paper was founded in 1894 by Preston B. Englar, who also served as the editor until his death in 1945. Under his leadership, The Carroll Record promoted local history by publishing numerous articles covering towns in the northwestern part of the county.

In its early years the local reporting was provided by community correspondents who were often a local physician or another prominent resident who would gather information and write an article. The writing was not without occasional satire. One account of a petty theft details an employee who “frequently reveled in the luxury of Bacchus (the Greek god of wine) and shared the beverage with his pals.” The celebration continued for several weeks until his boss tapped into the surplus barrels of rye only to find them, “as empty as the average legislator.” After Englar’s death in 1945, Charles L. Stonesifer became the editor and served in that capacity until September 8, 1967, when his majority stock in the company was sold to Charles Whitfield Drury of Alexandria, Va., who became the editor. In 1971, the paper was sold to Stromberg Publications of Ellicott, MD, which published both Taneytown-Union Bridge and HampsteadManchester editions in 1975. The office moved to Hampstead in 1972 where it remained until 1977.

The Carroll Record histories of Taneytown and neighboring communities were compiled by the Historical Society of Carroll County and published as a book, The Carroll Record Histories of Northwestern Carroll County, in 1994.
Now, however, it is even easier to discover the history of Carroll County as well as Emmitsburg, thanks to Eric Glass, Owner/Chairman of The Taney Corporation in Taneytown. In an e-mail sent to a small number of individuals and organizations on August 1 of this year, Mr. Glass announced the launching of his website at  http://www.emmitsburgchronicles.com. He described the Emmitsburg Chronicle as “a digital archive of The Emmitsburg Chronicle, The Emmitsburg Dispatch, and The Carroll Record dating back to 1879. The website was created as a community service to locals and history enthusiasts interested in Emmitsburg and Taneytown history. Users will have full access to the archives at absolutely no cost to them. Over 55,000 pages have been scanned at high resolution allowing you to access the original text and artwork from each newspaper. Our user-friendly search engine makes it easy to search by year, date, or key terms.” Now that you know the history of The Carroll Record; the wishes of Mr. Englar to keep local news as accurate as possible; and the location of Mr. Glass’ gift to the community, why not sit down at your computer and explore the history of the County!

David Buie is a Taneytown resident who has a passion for Carroll County and its place in
history. 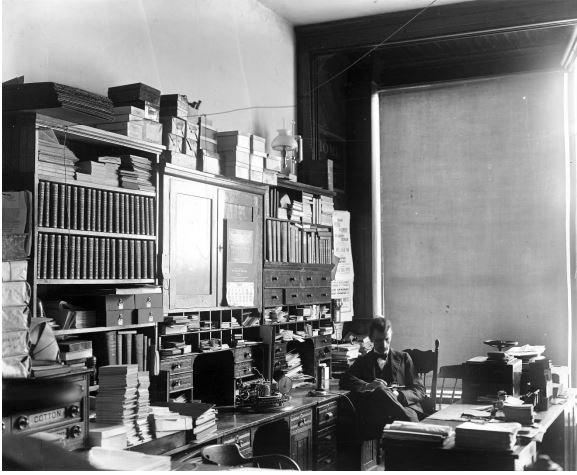 Photo credit: Courtesy of the Historical Society of Carroll County
Photo Caption: Editor Preston B. Englar (a.k.a. P.B. Englar) sits at his desk in The Carroll
Record business office