Did you know the Jones sisters of Sykesville?  Most of us did not, but we are disadvantaged because these fascinating women were well worth knowing.

Fanny, Ida and Elsie Jones, born in the 1880s, were the only children of a prosperous farmer named Nicholas Jones and his wife, Julia Webb Jones.  Though their earliest years were spent on their father’s farm, Annandale, in Howard County, they moved to Sykesville while still young and spent the rest of their lives there.

Today they strike us as a happy combination of Victorian gentility and twentieth century spunk.  None married, supposedly because their father didn’t approve of any of their suitors, but together they forged a creative life in which each played an important role.

Youngest sister Elsie loved photography and purchased an expensive Voightlander camera in the 1930s with which she captured images of historic buildings, landscapes, farm life, and flower arrangements.  Ida, in the middle, was a 1916 graduate of the Maryland Institute and the most artistic family member.  Fanny, the eldest, seems to have kept her siblings rooted in reality as they pursued their cultural endeavors.  She cooked, kept house and acted as chauffeur when the trio journeyed around Maryland with the camera.

From the 1930s through the 1950s, the Jones sisters combined their efforts to produce and sell hand-tinted photographs which were very popular, especially in the Sykesville area.  Their framed prints were a favorite wedding gift for couples in the 1940s.

Elsie, who always had a deep interest in history, took the photographs.  She also lectured about history using her pictures as illustrations.  When listeners’ attention began to wander, she inserted ghost stories associated with the buildings she was discussing.  She claimed she had a story for each and every place.

Ida was the darkroom technician, developing and printing the images Elsie captured.  With great care, she tinted many of the black and white photographs with thinly applied oils so as not to obscure the details.  One of her specialties was coloring photographs of flower arrangements.  Famed Maryland photographer Aubrey Bodine said of these still-life arrangements, “I could reach up and pull the flowers right out of the picture.”

In 1944, the sisters published a 50-page book of photographs accompanied by historic notes called “Maryland Through the Camera’s Eye.”  They contemplated producing a second volume using more of their work but paper quality was poor during the war and they abandoned the idea.  The sisters apparently worked well together.  Elsie once said, “To speak of one is to speak of all and credit for one is credit to all.”

Sunnyholme Studio, which the sisters ran in Sykesville in the 1950s and early 1960s, carried not only their photographs but also postcards and note cards they made as well as needlework.  Though items were shipped all over the country, the bulk of their work remained in the local area and can occasionally be found by lucky shoppers at yard sales or in antique stores.

Ida passed away in 1967, followed by Fanny in 1973 and Elsie in 1975.  They were laid to rest in Springfield Presbyterian Cemetery next to their parents.

Local exhibits of the photographs have appeared over the years and the Gate House Museum in Sykesville owns a small but nice collection.  The sisters were recently featured at one of the Historical Society of Carroll County’s Box Lunch Talks.

The sisters’ own collection is held privately by relatives, but enough photographs are scattered among Carroll County families that the sisters won’t be forgotten, nor will the delightful images they captured. 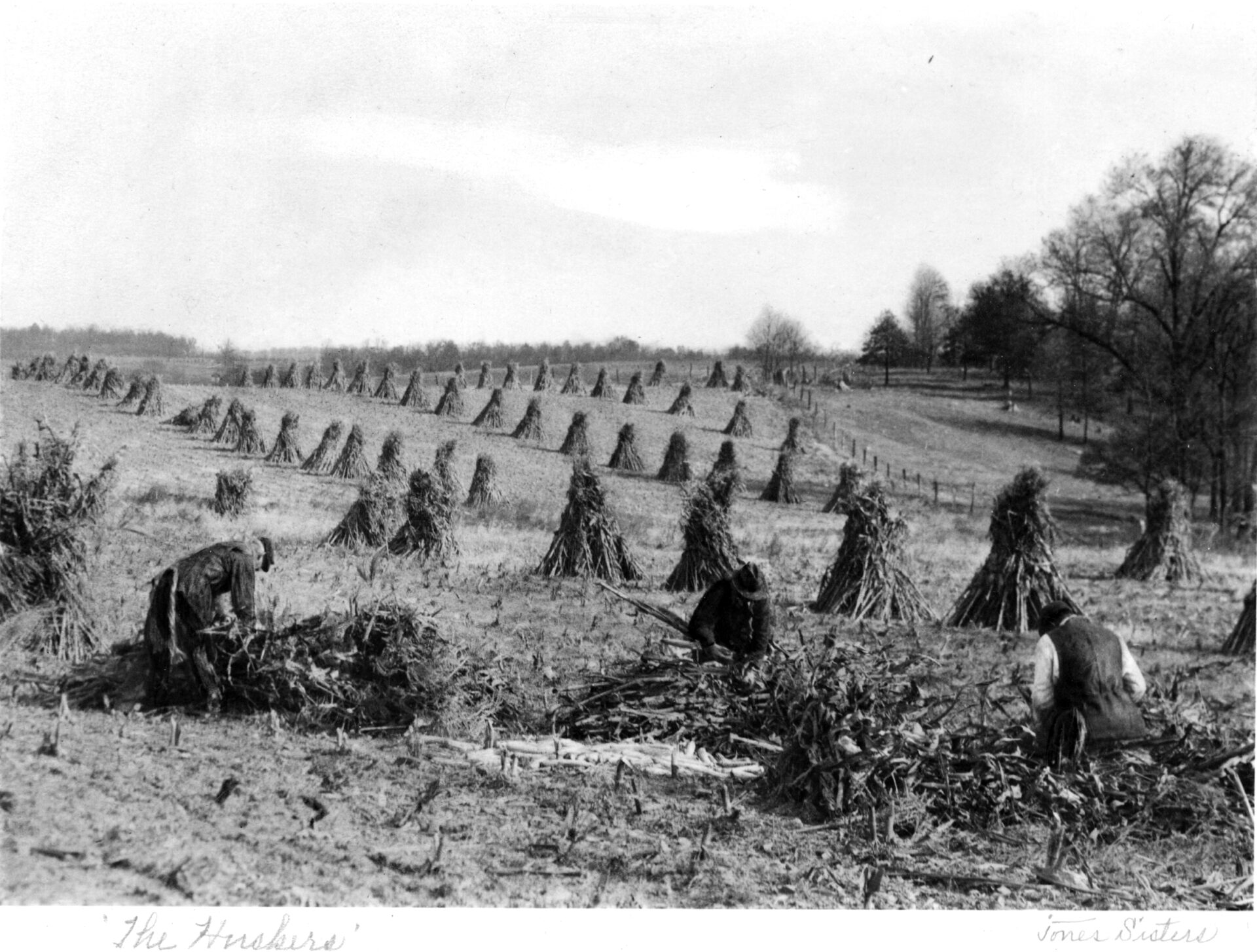 Photo caption:  This hand-tinted photograph of corn huskers is one of the more famous local images taken by the Jones sisters of Sykesville.