While much has been written over the years about World War I, especially in 2018 as we commemorated the 100th anniversary of its end, we scarcely mention an earlier conflict that resulted in the United States acquiring the Philippine Islands. The Spanish-American War was over in one year, 1898, but after American troops drove the
Spanish from the Philippines, they began a struggle with Filipino insurgents anxious to throw out the conquering Americans and rule themselves. The resulting Philippine Insurrection lasted from 1899 until 1902 and a soldier from Carroll County, Sterling Archibald Galt, participated in it. Not only did he participate, he earned the Medal of Honor for his “Distinguished Bravery and Conspicuous Gallantry in Action against Insurgents.” Galt, born in Taneytown in 1866, came from a Scots-Irish family. In 1880 he lived with his parents Henry and Anna Eliza (Annan) Galt on a Carroll County farm. By 1889 he was living in North Dakota where he joined a state military unit in his early 20s. Nine years later that unit became the 1st North Dakota Volunteer Infantry, and Private Galt was shipped to the
Philippines. After a year of fighting, most of the unit returned to the U.S., but Galt apparently liked army life. He remained in the Philippines with the 36th Infantry, U.S. Volunteers, as a sergeant major.

Galt and several dozen other highly-skilled soldiers were chosen as “Young’s Scouts,” an early version of a “special operations unit,” to deal with the insurgents. Acting like the eyes and ears of the army, they moved ahead of the main column of American troops through the swamps and jungles of Luzon Island. While under fire on November 9, 1899, Galt swam across the rainswollen Pampanga River holding a rope in his teeth. Upon reaching the other shore, he tied the rope to a tree and guided several hundred men nearly surrounded by the enemy through the water to safety. It was for that action the United States awarded him the Medal of Honor in 1902. Tragically, he contracted malaria during those years in the tropics which led to a medical discharge in 1901 and return to the U.S. Sometime in 1902 Galt, now 36 years old and living in Pittsburgh, Pennsylvania, met Minnie Ashbrook who would become his wife. On their Ohio marriage license he listed his occupation as “sales agent.” He and Minnie were married in May 1903 and apparently headed to Missouri. How dramatically his life had changed in two years! By 1908 the couple lived in Harrisonville, a town now part of greater Kansas City, Missouri. What took them there is unknown, but at the age of 42 Sterling Archibald Galt succumbed to nephritis and was buried in Harrisonville’s Orient Cemetery. The couple left no children to listen to stories of their father’s heroic actions, and much of Galt’s life remains shrouded in mystery.

Many years later, the Cass County, Missouri, Genealogical Society, the Cass County Historical Society, and the Harrisonville Honor Guard organized a special Memorial Day service at Orient Cemetery to honor him and shared his full Medal of Honor citation. Mary Ann Ashcraft and David Buie enjoyed the challenge of researching Sterling Galt’s life in a wide variety of sources. 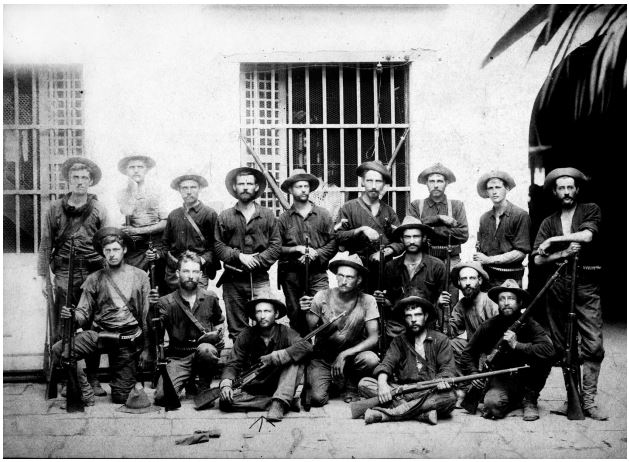