Mill a Part of County’s Past

Mills for grinding grain, sawing wood, fulling (thickening) wool and other purposes dotted the Carroll County countryside in days gone by.  There was abundant local water power to operate them and milling could prove a very profitable business.  Early maps show dozens of mills situated along Sam’s Creek, Big and Little Pipe Creeks and their tributaries and on the north and south branches of the Patapsco River.  Eventually other power sources replaced water, so mills could be built anywhere, but the most logical locations were near the railroads so raw materials could be delivered and finished products shipped.

It was announced in the American Miller of May 1, 1890, that N. I. Gorsuch and Son, a Westminster company that had previously been engaged in grain and fertilizer and hay and straw packing, was planning to go into the milling business.  Within a few short months, a three-story, 100-barrel, steam-operated flour mill was erected on a siding of the Western Maryland Railroad near the city center.  “The special machinery is all of the newest modern pattern,” reported the same publication.

The company must have prospered because several years later the mill was remodeled to produce 150 barrels of flour daily using a 75-horsepower steam engine.  An elevator standing beside the mill held up to 20,000 bushels of grain, probably supplied by Carroll County farmers.  By 1900, N. I. Gorsuch & Son also operated a general store in the same complex of buildings.

A fascinating sidelight of the Gorsuch milling operation is the seasonal work it did for Baltimore’s Hebrew community.  For a number of years, Gorsuch received contracts to grind flour to fill the special needs of Jewish bakers during the Passover season.  In 1905, the contract was for 1,000 barrels of kosher flour which would take approximately seven to ten days to produce under the following conditions as described in the Baltimore County Union, a Towson newspaper:

“…A party of four rabbis will visit the mills for the purpose of inspecting the plant before the grinding begins.  Before the work starts every particle of flour is cleared from the mills, the bolting cloth and machinery is all cleaned and examined by the rabbis. The wheat, which is the best, is also examined.  In fact, a minute examination of the plant is made, even to the coal, which is to be used in the furnaces for operating the power plant.  From the time the examination is completed until the last of the flour is shipped, there is always a watcher, appointed by the rabbis, who is on duty at the mill, even sleeping there.  When the wheat has been ground and the flour is ready for shipment, it is packed in new oak barrels or new sacks for shipment to Baltimore.  Each barrel is sealed and stamped.  When it is packed in the cars [railroad cars] for shipment the car is also sealed and stamped.  This year [1905] the flour is to be packed in new jute sacks.  The flour will be taken to Mrs. Annie Bernstein’s on Exeter Street, where the Passover bread is made.” 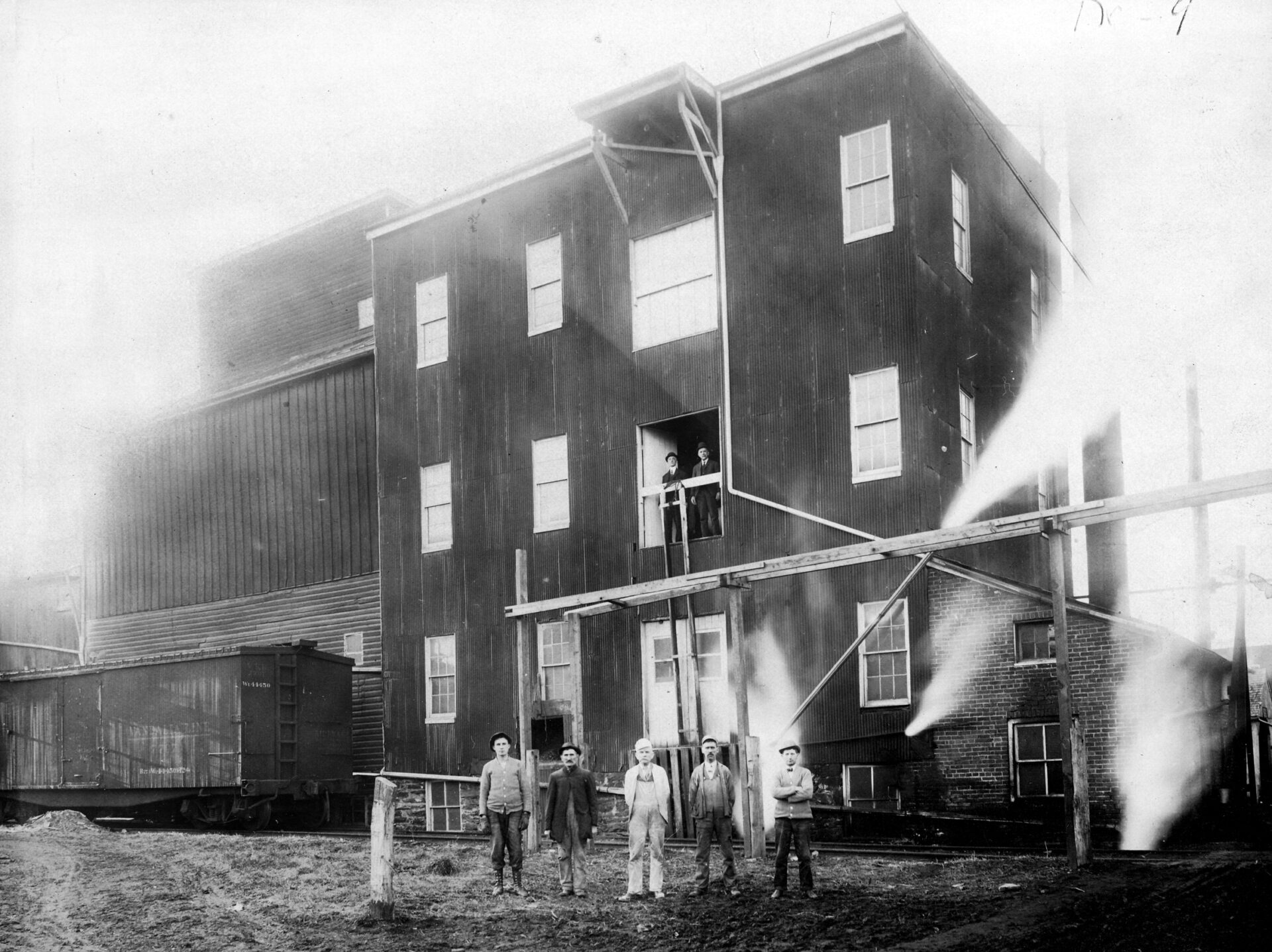 Photo caption:  This 1913 photograph shows the flour mill, grain elevator and general store run by N. I. Gorsuch & Son located on a siding of the Western Maryland Railroad in downtown Westminster.