Maryland has History of Quakes

“An Earthquake.  Mysterious Noises and Shaking of Houses, Indicative of An Earthquake.”  That was the title of an article which appeared in Westminster’s January 8, 1887, Democratic Advocate.  The report continued with the experiences of various well-known, and presumably reliable, local citizens.

“Congressman Shaw was awakened by a sound as of an explosion deep down in the earth, and for the moment concluded that either an attack was being made on the safe of the Farmers & Mechanics Bank, a few doors away, or that an explosion had occurred in the drug store of A. H. Huber, adjoining.”  “At the residence of E. Mackley, the family were aroused, and a picture fell from the wall.”

“H. Vanderford heard two loud noises, as though his son in an adjoining room was rapping on the wall to arouse a visitor who was to go off on an early train.  He then felt the house shake, and got up.”  “Hon. Charles B. Roberts was awakened by a noise which sounded to him as if someone was breaking into his house.  This was soon followed by a louder report which, he says, resembled the blasting of rocks.”

This was not the first time that Carroll Countians had experienced a small earthquake, and it certainly was not the last.  Luckily, there are no major faults underlying this area like the ones running through parts of California, so the quakes here tend to measure less than 4.0 on the Richter Scale and do little or no damage other than remind us that the earth’s crust is not stationary.   Everyone knows about the San Francisco earthquake of 1906, but we forget there was a big quake in the Charleston, South Carolina, area in 1886 and several mammoth quakes centered in New Madrid, Missouri, in 1811-12 which were felt as far away as Boston and Washington, D.C.

According to the United States Geological Survey website, the earliest earthquakes recorded in Maryland occurred in 1755 and 1758.  The description of a March 22, 1758, event, which appeared in an Annapolis newspaper, was probably quite accurate – “a very considerable Shock of an EARTHQUAKE” which lasted about half a minute.  Just before the quake there was a “rumbling noise.”   Of course the epicenters of both quakes may have been hundreds of miles away.

The most recent quake felt in Carroll County occurred July 16, 2010.  There was enough motion that it was reported on TV, although many people were totally unaware of it at the time.  The seismometer installed by the Maryland Geological Survey on bedrock in the Soldier’s Delight area outside Reisterstown picked up the movement and the tracing on the helicorder was quite impressive.  The quake’s magnitude was 3.6 and the center was roughly ten miles northwest of Rockville, Maryland at a depth of about three miles.  This local event was not likely to have been felt very far away in contrast to the New Madrid quakes which were felt over an area of approximately a million square miles.

The Maryland Geological Survey’s website at www.mgs.md.gov/seismics/help.shtml is a valuable resource for understanding and interpreting earthquakes. 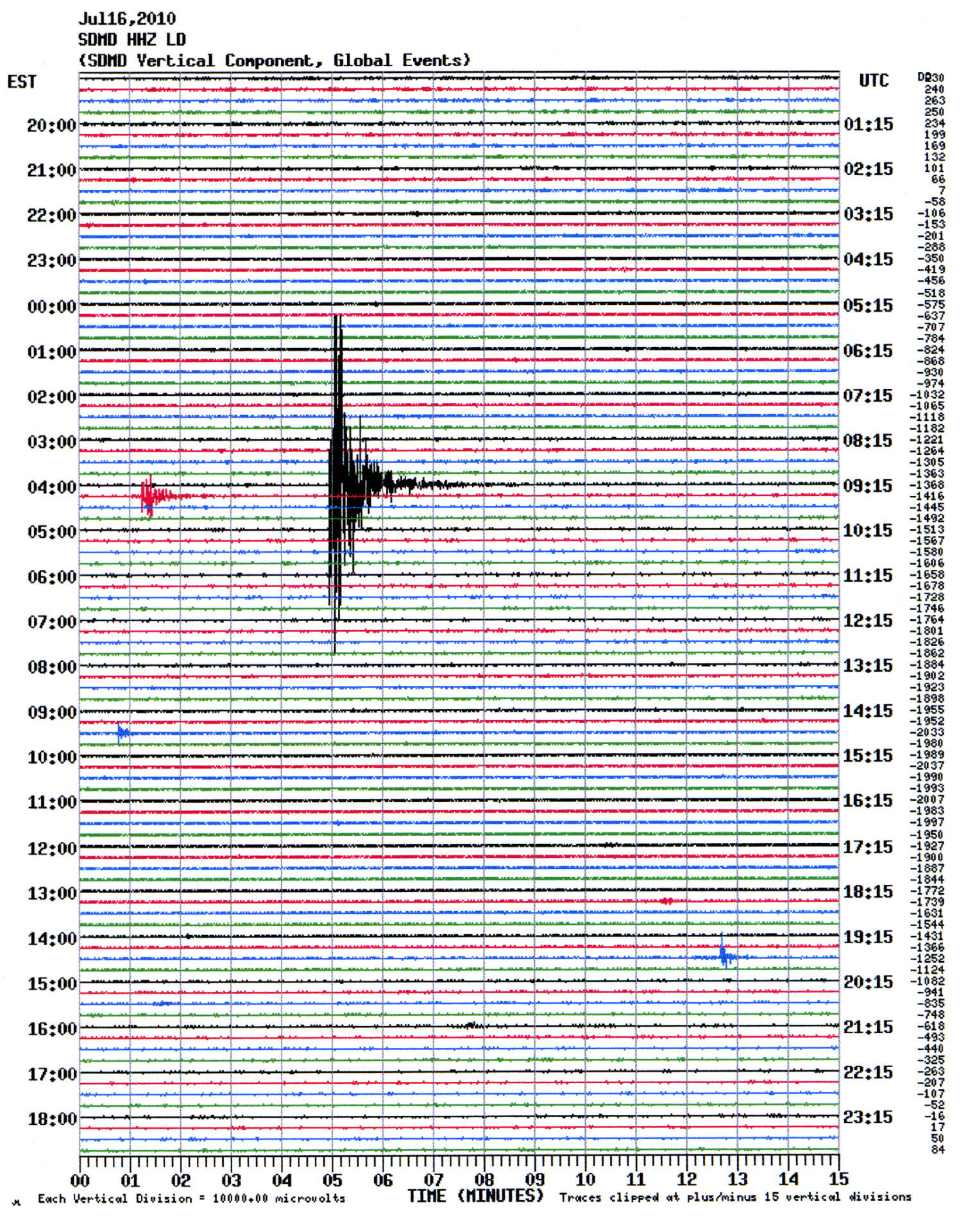