Church Celebrates its Past

Any institution which has been around for 250 years has good reason to celebrate.  This year, St. Benjamin’s Lutheran Church, located on Krider’s Cemetery Road outside Westminster, is celebrating its 250th anniversary with a series of events highlighting aspects of its history.

It is hard to believe St. Benjamin’s has been in existence longer than the city of Westminster – not the current building, but the Lutheran congregation.  Today’s church, built in 1890/91, has been modified a number of times.  It replaced a brick structure built in the first decade of the nineteenth century which replaced the original 1763 log church constructed on land acquired from J. Krauter/Greider/Krider.

Like many other Lutheran churches in Carroll County, St. Benjamin’s began as a “union” church where both Lutheran and German Reformed congregations worshipped, usually on alternate Sundays.  During the late nineteenth century, many union churches split and built separate churches for each denomination.  A split is part of the history of St. Benjamin’s Lutheran and Benjamin’s (Krider’s) United Church of Christ (formerly the German Reformed congregation).  On August 14, 2011, the congregations of both churches will share an anniversary worship service on the site of the union church in the old part of Krider’s Cemetery.

The original parishioners at the union church were mostly German-speaking farm families from the Westminster area and some members of St. Benjamin’s today are likely descendants of those first worshippers.  While a number of church members are new to the county, others have lived their entire lives here.

I enjoyed attending a service on the second Sunday of this month which offered a glimpse of a Lutheran service from 1748, with the exception that this was chiefly conducted in English.  Pastor David Schafer, the choir, and a number of members of the congregation came dressed in period garb.  As we entered the church, men were asked to sit on the left side of the aisle and women on the right.  Candles provided the only lighting.  The choir sang its anthem in German, but thankfully the hymns were English translations of old German ones and Pastor Schafer’s sermon was quite a bit shorter than it would have been in 1748!

Following the service, members of the congregation chatted in the social hall while enjoying food which might have been prepared in the 1700s – apple strudel, dark brown bread to be spread with butter and/or apple butter, cider and other treats.  Scattered around the hall were lots of interesting photographs and displays.  I got a peek at copies of early church records handwritten in German – most likely baptisms.

A twelve-member committee has been planning the anniversary events for many months.  Some members have consulted with scholars at the Lutheran Theological Seminary at Gettysburg for help in recreating the kinds of services which would have been held over the past centuries.  Every second Sunday during this anniversary year, the services will be conducted using Lutheran liturgy and music from a previous era.  On February 13, the service will be typical of the 1840s.

It is heart-warming to see St. Benjamin’s pride in its long, fascinating history. 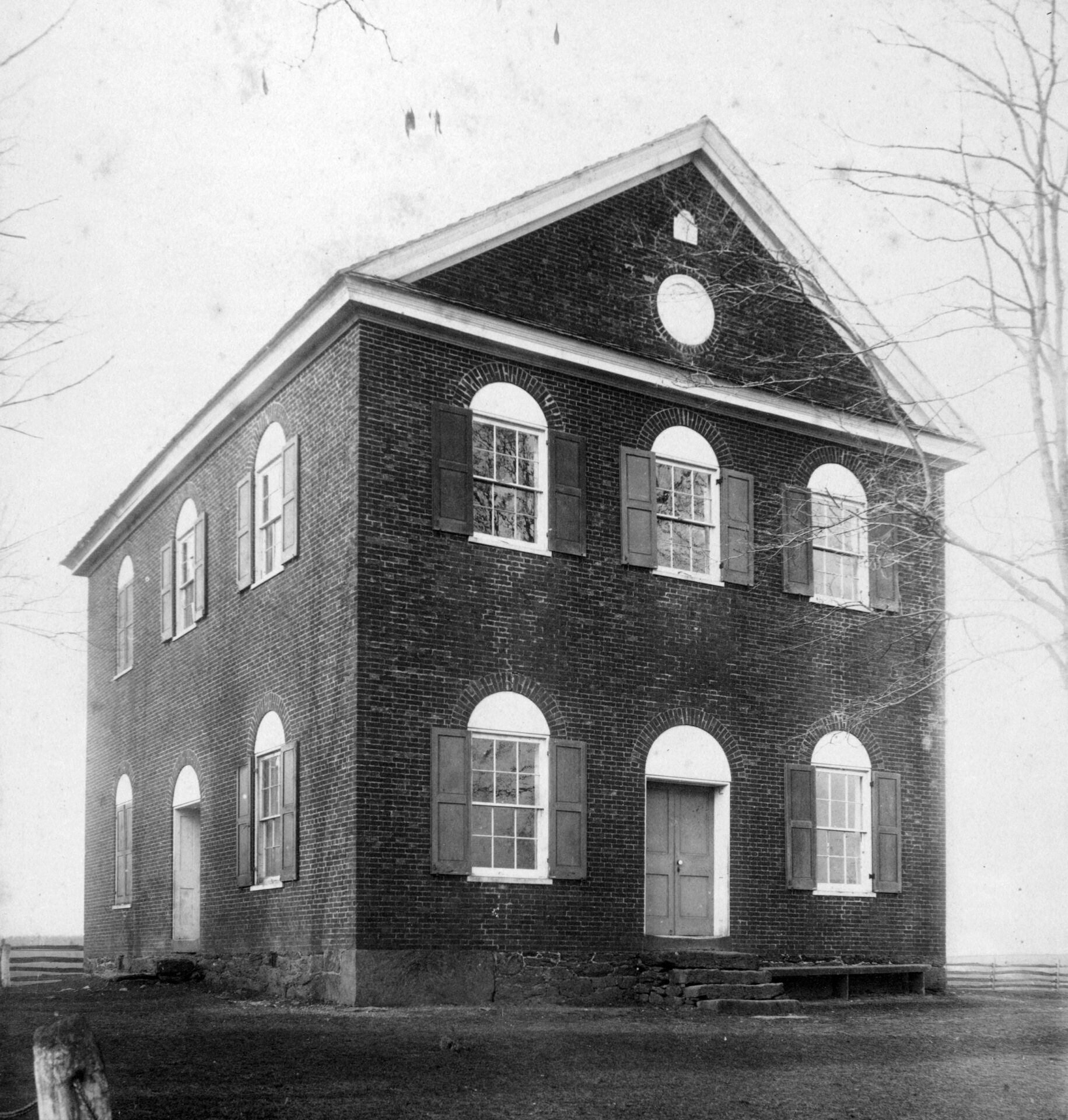 Photo caption:  Before Westminster’s early Lutheran and German Reformed congregations separated and built their own churches, they worshipped in this handsome early nineteenth century “Union Church” on the northern outskirts of the city.   It suffered severe damage at the end of the nineteenth century, was demolished, and replaced by today’s St. Benjamin’s Lutheran Church and Benjamin’s (Krider’s) United Church of Christ.