Clues Put Together Man’s Past

Reconstructing the life of someone born in 1778 is a challenge no matter whether that person was famous or an ordinary citizen.  Adding other obstacles such as being poor, black and illegitimate makes research just that much more difficult, but we’ve uncovered quite a bit about Caleb McPeak, an African American tombstone carver who lived in Carroll County.

Some years ago, my friend Bob Farver stumbled across the following information in a translation of German records from St. Luke’s (Winter’s) Church outside New Windsor – “Calep M. Pek, son of Father Henrich Arter nat extr. conjugium [born out of wedlock], b. 28 Aug. 1778, bp June 1794.”  Caleb McPeach, listed as a mulatto, age 82, in the 1860 Carroll County census, must be the very same person.  The ages recorded by census takers frequently don’t jibe with other information, but in this case, Caleb’s age is exactly what you’d expect.    The spelling of his last name doesn’t match, but it hardly ever appears the same way in various records I’ve discovered, so I am willing to balance one piece of good evidence (his age) against something a bit questionable.

McPeak’s popularity as a nineteenth century stonecarver is revealed by the abundance of his gravestones found in old cemeteries in western Carroll County and eastern Frederick County near his home in “Muttontown,” a small community inhabited by blacks, whites and mulattos between Uniontown and Union Bridge.  Quite a few estate administrators listed him as the maker of tombstones they bought for deceased family members.  One record from 1832 appeared, “Pd 11.50 to Caleb McPeak for pr. Tombstones for George Urner – late of Frederick Co.”  When I knew the area where the deceased person had lived, I began searching through local cemeteries to find the stone.  What a thrill if I found it, it was readable, and bore all the earmarks of McPeak’s work!

But census records, administration accounts and tombstones don’t tell us much about Caleb himself.  Just by chance I ran across a reference to him which appeared in an article in the Union Bridge Pilot of August 12, 1910.  James L. Switzer, who grew up in Union Bridge in the 1840s and 1850s, was reminiscing about his youth and the interesting characters he’d known.  He wrote:

“I remember also Nelson Galwith, the lame shoemaker of Muttontown; and Caleb McPeak and his wit and jovial humor.  He came to the mill [Switzer’s family owned a mill] once with a tragic story of what a “big two legged rat” Sol. Stoner caught in his corn crib.  Kale was generally ‘onto’ whatever was going on about town and he had a peculiar way of expressing himself that was mirthful to hear him tell it.  I often saw all these and other citizens of Muttontown at church at the school house there.”

Finally Caleb (Kale) came alive!  Tiny Bowen’s Chapel on Bark Hill Road is likely the combination church and school which Switzer mentions.  Services are still held there.  McPeak was probably buried in a nearby cemetery but any tombstone he might have had is gone.  In fact, the whole cemetery now has only one visible marker.

Another article on McPeak appeared in this column on July 30, 2006.  You can find it on the website of the Historical Society of Carroll County – http://hscc.carr.org/research/yesteryears/. 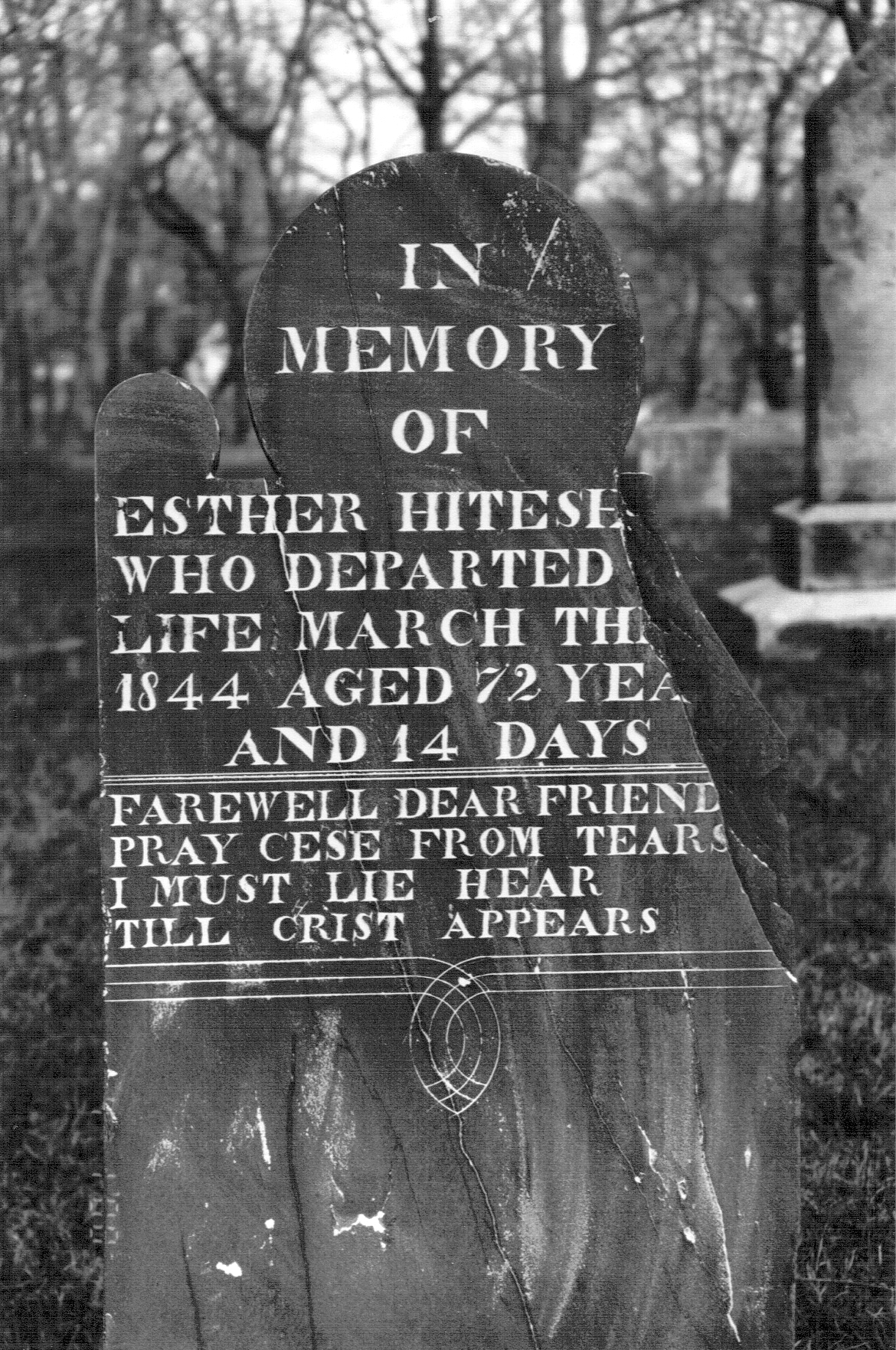 Photo caption: This headstone for Esther Hitesh[ew/ue] was erected at the Uniontown Church of God Cemetery.  It is very typical of the work done by Caleb McPeak, a mulatto stonecarver working in Carroll County during the first half of the nineteenth century.