This holiday season is steeped in secular and religious traditions for both Christians and Jews.  Gift-giving and food consumption were as important in 1903 as they are today as evidenced in December issues of Westminster’s weekly Democratic Advocate newspaper.

Mary B. Shellman, a woman always concerned about her fellow man, wrote her usual Christmas appeal to local citizens, urging them to remember the indigent men and women residing at the Carroll County Alms House (now the Farm Museum) during the upcoming holiday.  Miller’s Grocery and Confectionary Store on West Main Street in Westminster advertised, “We have Barrels of Candy as low as 5¢ per pound, and up to 60¢ per pound.”  “We have everything here but money and we will give you more of our goods for your money than you could possibly get anywhere in the state.”  “Everybody buying their Christmas Goods here gets a Present if the bill amounts to One Dollar or more.”  Store promotions occupied many columns of the paper just as they do today, but of course there were no color supplements.  One gift suggestion for men was a twenty-five cent tie which supposedly looked as classy as a fifty-cent one.

Under the headline “To Carve the Turkey,” was a short article offering specific directions “on this most important matter.”  “A few suggestions…probably will not be amiss, and may save the fresh Christmas table linen from desecration by splashes of gravy.”  “First, then, let the carver plunge the fork firmly into the breast of the turkey.”  The article continued with advice which hasn’t changed significantly over the past hundred years.  It ended, “If you cannot succeed in dismembering [the turkey] gracefully, don’t be too sure that the toughness of the bird is to blame.  A good after dinner speaker is more frequently met with than a good carver.”  No wonder turkeys are often carved in the kitchen today!

A headline reading, “Old-Fashioned Pound Cake,” was followed by a mouth-watering recipe.  “The old rule – and there is none better – calls for one pound each of butter, sugar and flour, 10 eggs and a half wineglass each of wine and brandy.”  Cholesterol counts thankfully were years away.

Just before Christmas, the Mutual Fire Insurance Company of Carroll County held a meeting of its officers and directors which was followed by a sumptuous dinner at the Westminster Hotel, the large yellow brick building now housing PNC Bank offices on East Main Street between Longwell Avenue and Center Street.  “The table was beautifully decorated with holiday doylies (sic), and at each plate was a sprig of holly, with berries, for a boutonnier (sic).  The menu consisted of oysters on the half-shell, stewed and fried, turkey with cranberry sauce and kraut, roast ribs of beef, ham, celery, pickles, vegetables, harlequin ice cream, mince pie, cheese, coffee and cigars…The dinner was admirably cooked, served promptly by the waiters, and greatly enjoyed by the guests, who complimented the manager upon the service.”

We may feel a bit guilty about our conspicuous consumption during the month of December, but our ancestors did their fair share of celebrating as well. 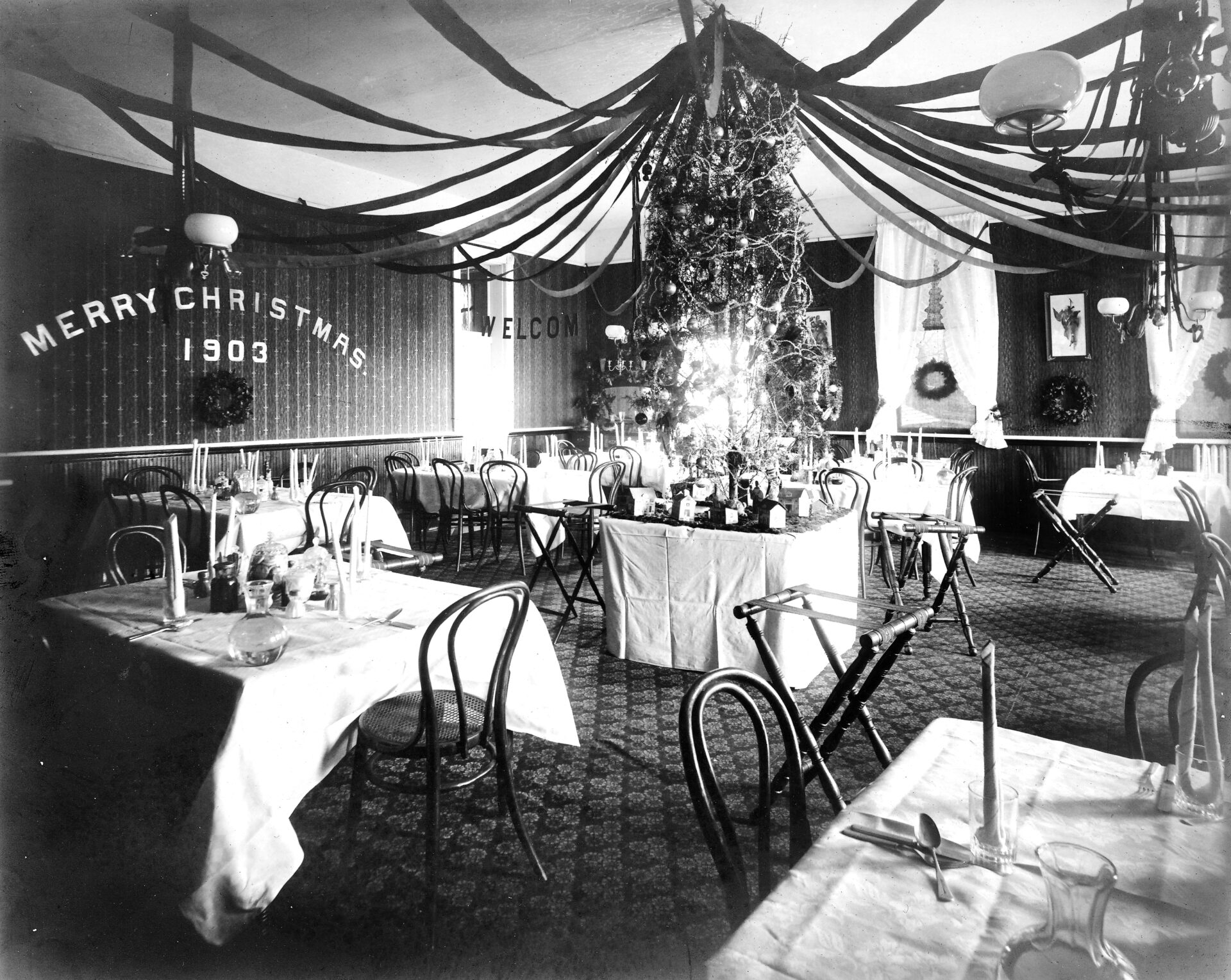 Photo caption:  A photograph of the dining room in the Westminster Hotel on East Main Street between Longwell Avenue and Center Street shows decorations in place for the 1903 holiday season.