The Ecker family of Carroll County can boast of many years spent in the field of education.  Chuck Ecker recently retired as Superintendent of Schools and Bill Ecker served in a similar position on the Eastern Shore after first teaching locally.   Their great aunt, Martha Jane Ecker, spent 53 years teaching in one-room schools beginning at age 17 in 1872.

One of Benjamin and Sarah Ecker’s twelve children, Jane attended Maryland State Normal School (now Towson University) to prepare for her career in teaching and encouraged several younger siblings to enter the same profession.  Altogether, five of the twelve children became teachers, and they obviously passed down their enthusiasm for education.

Teaching has never been an easy profession and it certainly wasn’t in the nineteenth century.  Salaries were meager (about $240 a year in 1894).  Teachers might arrange payment of the rent for their schools, provide fuel for the school stove, rent county-owned books to students, maintain discipline…and instruct.  Students too poor to rent textbooks could use a free one, provided the teacher filled out a permit.  When teachers failed to submit enough permits to account for every book, the rent was deducted from their salaries.  This was part of the paperwork kept during that period, although a far cry from today’s workload.  Imagine 17-year-olds beginning their careers with these responsibilities!

Students ranged in age from 6 to 21 in the one-room schools and each needed his own slate.  On the day the county school inspector paid a visit to evaluate teacher and pupil performance, everyone was primed to do his best.  Schools were assigned a team of three trustees, men living nearby who helped with a variety of tasks such as upkeep of the property.

Jane Ecker’s teaching positions for the first twenty years were in eastern Frederick County where she was born.  If her school was (properly “were” but most people don’t observe the use of the conditional) too far from home for a daily commute, she boarded with local families during the week.  When she was paid, she made inquiries to be sure the poor children in her care had proper shoes and sufficient clothing to wear.

In 1896, Jane’s younger sister died, leaving her 3-year-old son Clyde to Jane’s care.  As might be imagined, Jane took this responsibility in stride although young Clyde probably was a challenge at times.  Naturally he had to accompany her to school and stay in the classroom.  Family stories say she occasionally caught him under her desk making the students laugh with his antics.   Jane always referred to the pupils as her “scholars” and ruled them with a firm but kind hand.

After her stint in Frederick County schools, Jane served another thirty-three years in Carroll County, retiring in 1925 at age 70.  When he was old enough, Clyde provided her with transportation to and from school via horse and buggy or in the sidecar of his motorcycle.  She never married.

Virginia Ecker Hierstetter owns the small bell which sat on her Great Aunt Jane’s school desk and the ink bottle she used to fill the students’ ink wells. 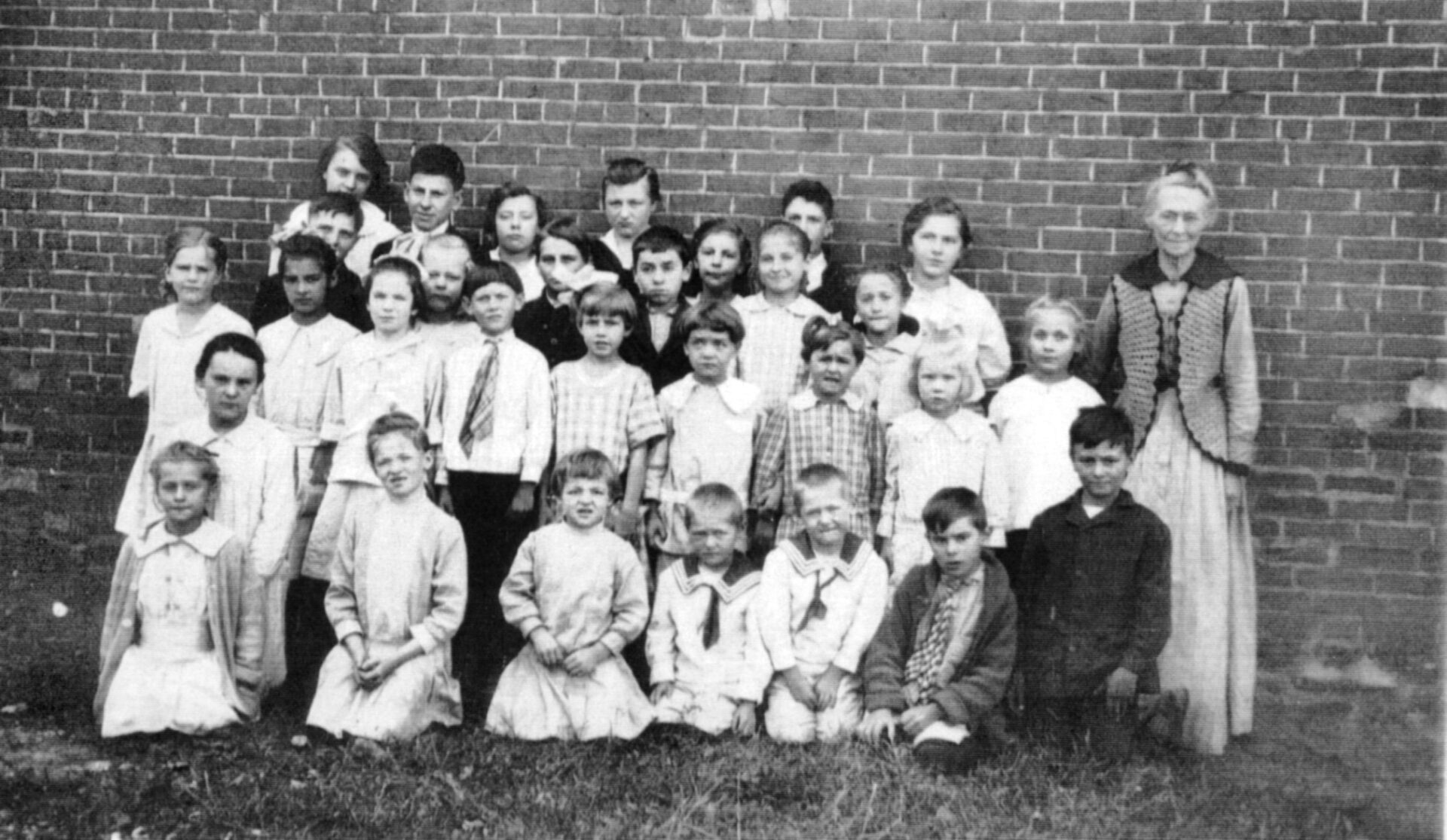 Photo caption:  Martha Jane Ecker stands with thirty of her “scholars” outside Baust Church School sometime in the early 20th century.  Her teaching career, which lasted from 1872 until 1925, must be one of the longest in central Maryland.