The Confederate Raid on New Windsor

With a chorus of rebel yells and the firing of pistols in the air, 600-800 Confederate cavalry came swooping into New Windsor on July 9, 1864, 150 years ago this July.  Their immediate goal was to loot the town’s stores– stealing chickens, boots, hats, shoes, tobacco, biscuits; whatever else they could muster to provision their ranks.  They also took any worthy horses, saddles and bridles.  Their long-range goal was to execute a daring mission designed by General Robert E. Lee himself.  If successful, it might have changed the course of the war.

The rebels’ commander was an Ivy League-educated lawyer from Frederick, General Bradley T. Johnson, and he was accompanied by the dashing Major Harry W. Gilmor who hailed from Baltimore County.  Their orders were to destroy railroad bridges and cut telegraph wires above and below Baltimore to disrupt communication between Washington and the North.  Then they were to move on to Point Lookout at the tip of Maryland’s Western Shore.  There the Union had over 14,000 Confederate troops imprisoned. Following their expected victory, the next step for the rebels was to arm the freed prisoners and march on Washington, D.C., bolstered by forces commanded by General Jubal Anderson Early.

The aim of all of this was nothing less than the conquest of the nation’s capital.  The Confederate leadership believed this much needed victory would be a game changer for the South, demoralize the North, and serve as a powerful bargaining chip when truce terms were negotiated.

As Johnson rode up New Windsor’s Bath Street, now Main Street, he happened to recognize a woman standing on the porch of a house across from the bank.  She was Nettie Stouffer and had been a school-mate of the general in nearby Libertytown.  He ordered his aide to plant the Confederate flag outside the house and commandeered it for his temporary headquarters.

While Johnson rested, his troops looted town stores, including one next door owned by the Stouffers.  When Nettie pleaded with the general to have his men stop, he called a halt to the looting of this particular store.  Unbeknownst to Johnson, Nettie’s husband, Daniel, happened to be a Union sympathizer.

Gilmor used his visit to town to recruit a good number of young men studying at Calvert College, the site of today’s Brethren Service Center.  Then Johnson sent Gilmor and his raiders on to Westminster to capture the town and cut telegraph lines.

Upon Johnson’s death in 1903, the Union Bridge Pilot published a description of the 1864 raid:  “Some people stayed out of their homes at night, some put their clothing in sacks and had them out of doors, some put money in bottles and buried it for safety, and as before stated, at no time during the Rebellion, was this part of Maryland more agitated, more frightened and more nearly crazed by war….”

Residents breathed collective sighs of relief when the last of the Confederates moved on to Westminster in the morning.  The South eventually aborted its plan to capture Washington, and New Windsor thought itself fortunate to have survived such a close brush with the war.

Frank Batavick is a trustee of the Historical Society of Carroll County and a member of the New Windsor Heritage Committee. 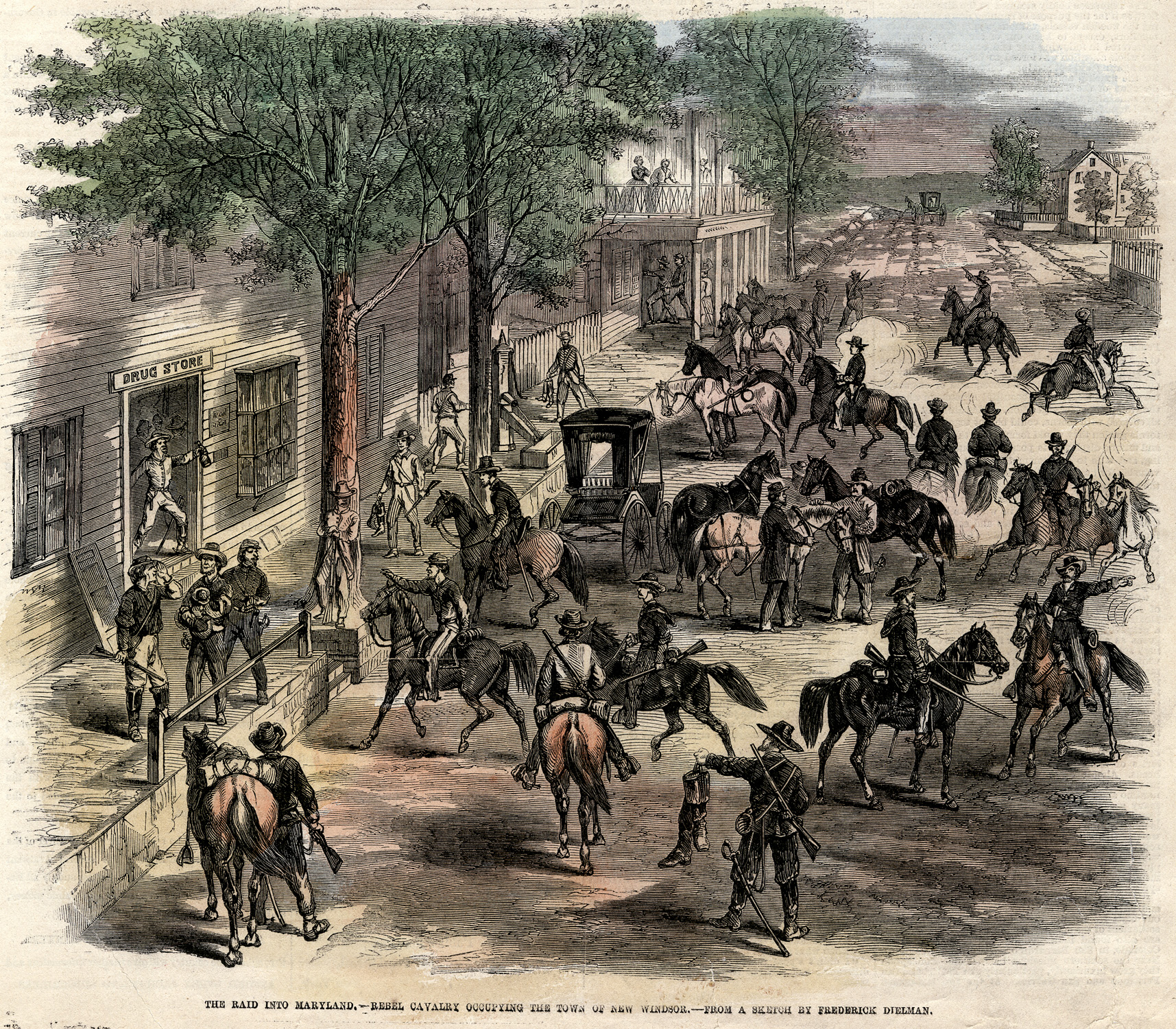