A Hessian Soldier Who Came to Carroll

The gravestone of Conrad Zile which once stood in a Carroll cemetery reveals almost nothing of a long, adventurous life spent in Europe and America.

Zile, originally known as Konrad Zeul, was one of the Hessian soldiers sent to North America to fight for the British against the colonists during the American Revolution.  He came from the town of Kilianstadten in Hesse-Hanau.  Count William, the ruler of his principality, was one of several German rulers who negotiated contracts with King George III of England to furnish troops to fight for him because England found this preferable to maintaining a large standing army of its own citizens.

Hessian soldiers were acquired by recruitment or conscription or were professionals.  Most of them came from the lower strata of society.  They might be younger sons or men out of work who needed income.  German communities kept lists of men who were considered “indispensable” because their jobs contributed significantly to the local economy, but “dispensable” men might well end up in the army.  Conrad, age about 21 and single, arrived in British-held Canada in 1776.

Three American victories before 1779 resulted in the capture of large numbers of Hessians – Trenton (1776), Saratoga (1777), and Bennington (1777).  Thousands became prisoners – some for long periods. They were usually incarcerated inland in places like Lancaster and York, PA, Frederick and Fort Frederick, MD, and Winchester, VA.

The barracks which held Hessian prisoners still exist on the grounds of the Maryland School for the Deaf along S. Market St. in downtown Frederick. In a heavily German-speaking area like eighteenth-century Frederick County, the Hessians must have felt relatively at home.  If well-behaved, they were often released to earn money beyond their military pay by working locally as weavers, shoemakers, or millers as well as woodcutters or farm laborers.  They helped the struggling American economy by spending their British pay to purchase American items and by replacing colonists away fighting.  If a prisoner’s employment was far from the barracks, he might only need to report for roll call several times a week.

Obviously there were many opportunities for escape, particularly when the men were marched long distances from their points of capture or from one area of incarceration to another.  It appears Conrad deserted from Frederick in early January 1779.  He may have considered desertion his only means of survival because it was winter and food, clothing, and pay from his English “employers” were often late reaching the long-suffering prisoners in far-flung prison camps.

A young woman named Magdalena Lang, perhaps from Silver Run, eventually caught his eye and by 1787 they were married.  After Magdalena died leaving two young children, he married Barbara Tener(?) in 1796 who bore more children.  He bought several tracts of land in what is today Carroll County and became a naturalized citizen in 1797.  As his offspring married, the surname Zile began to appear in census records more frequently.

Conrad’s long journey from Hesse-Hanau ended in 1830 when he was laid to rest in the Tener/Hooper family cemetery just east of Taylorsville at the age of 76. 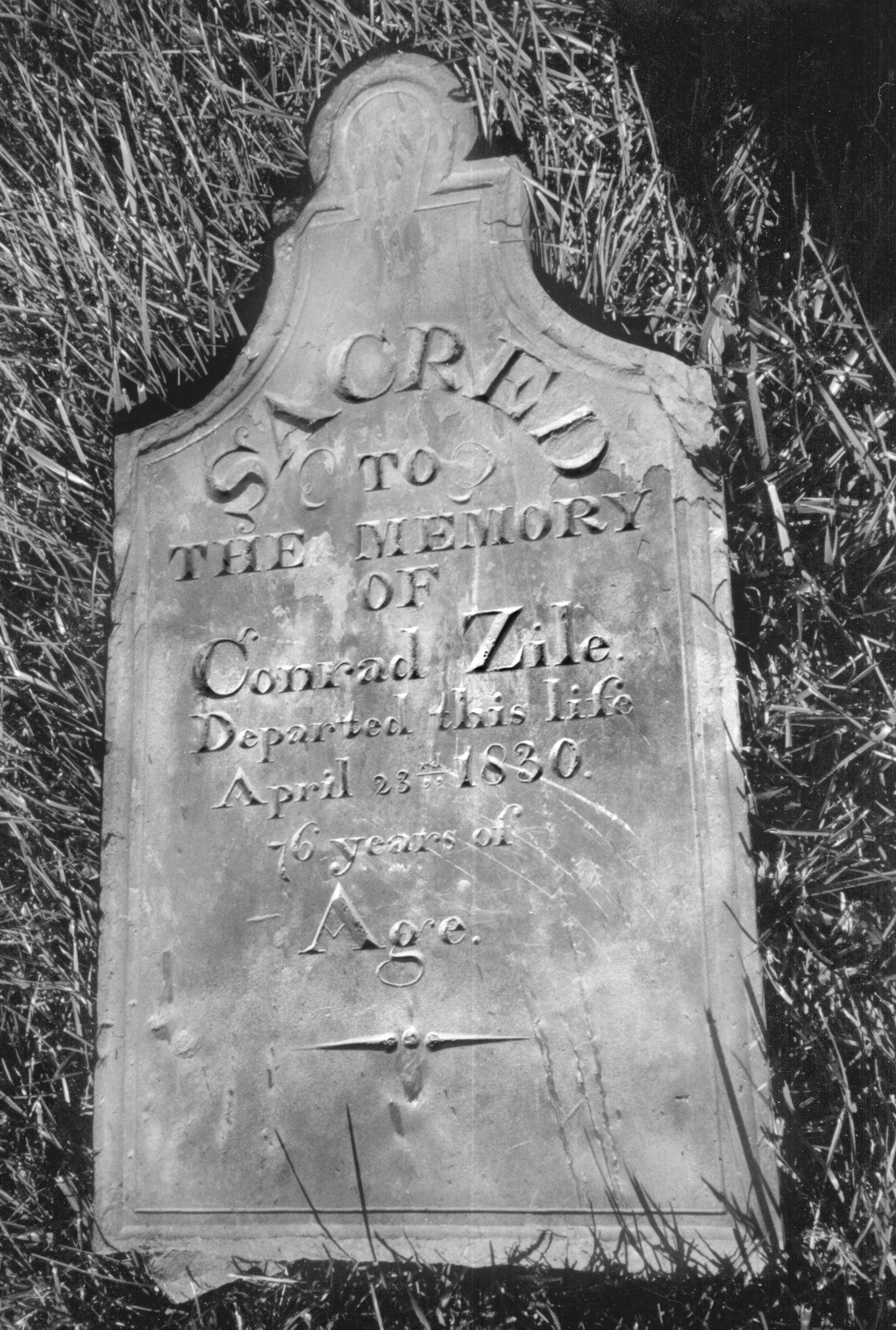 Photo caption: The gravestone of Conrad Zile, a Hessian soldier during the American Revolution, was one of many early markers found in the Tener/Hooper family cemetery which existed in Carroll County until recently.