Bits of History Surround Us

What first got you interested in history…pertaining to Carroll County or anything else?  I’m sure once you were bitten by the history bug, you didn’t stop reading, listening, or looking for bits of history, especially if there were family connections involved.

I’m grateful to my parents for childhood outings from our home in northern Delaware – visiting historic places like Gettysburg, Valley Forge, Philadelphia’s Independence Hall, and what seemed like endless numbers of antique shops.  Sometime in the late 1940s they also bought a book which I devoured from cover to cover, especially on summer days when it was too hot to play outside.  The title was I Remember Distinctly: A Family Album of the American People, 1918-1941.  Reading it was like having twenty-three years of Life magazine at your fingertips.  It covered all the major events and personalities between the two world wars – the sensational stories which capture your imagination when you’re a child.

Many of us who volunteer in the research libraries of the Historical Society of Carroll County and the Carroll County Genealogical Society can claim at least one memento with historic significance.  It may not be something of museum quality, but it is worth sharing with friends who have also been bitten by the history bug and will appreciate it.

One volunteer owns a fragment of the famous German dirigible Hindenburg which exploded over Lakehurst, New Jersey, on May 6, 1937, after a voyage across the Atlantic. The scrap of fabric looks pretty insignificant until you delve into its background.  I Remember Distinctly covered that tragedy with some dramatic photographs, but I’d never seen an actual piece of the blimp’s covering.  Although nearly two-thirds of the passengers and crew survived the explosion, the Hindenburg disaster scuttled the use of dirigibles for trans-Atlantic passenger service, and airplanes replaced them.

Annapolis boasted a top-notch cabinetmaker named John Shaw in the late 1700s when that city was home to some of Maryland’s most influential and wealthy citizens.  He built furniture for the State House as well as private homes.  One of his handsome pieces has been handed down in another volunteer’s family for generations.

Still a third volunteer has historic Tennessee mementos in her family’s possession.  One is a property deed signed by Andrew Johnson while governor of the state – the same Andrew Johnson who became president after Lincoln was assassinated.  His reputation was soon tarnished, but what fun to possess the deed!

There are other bits of history in that same volunteer’s family – all related to the Civil War in Tennessee.  In November 1863, a famous battle occurred between Union troops which had been under siege in Chattanooga and Confederate troops occupying the high ground around them.  Part of that battle took place on her aunt’s property near Lookout Mountain.  Lots of spent bullets, even a cannonball, have been recovered and, years ago, when water in the Tennessee River was low, the family could see the remains of an army wagon still stuck in the mud a hundred years after the war.

I hope a box, closet, or drawer in your household contains treasures like these. 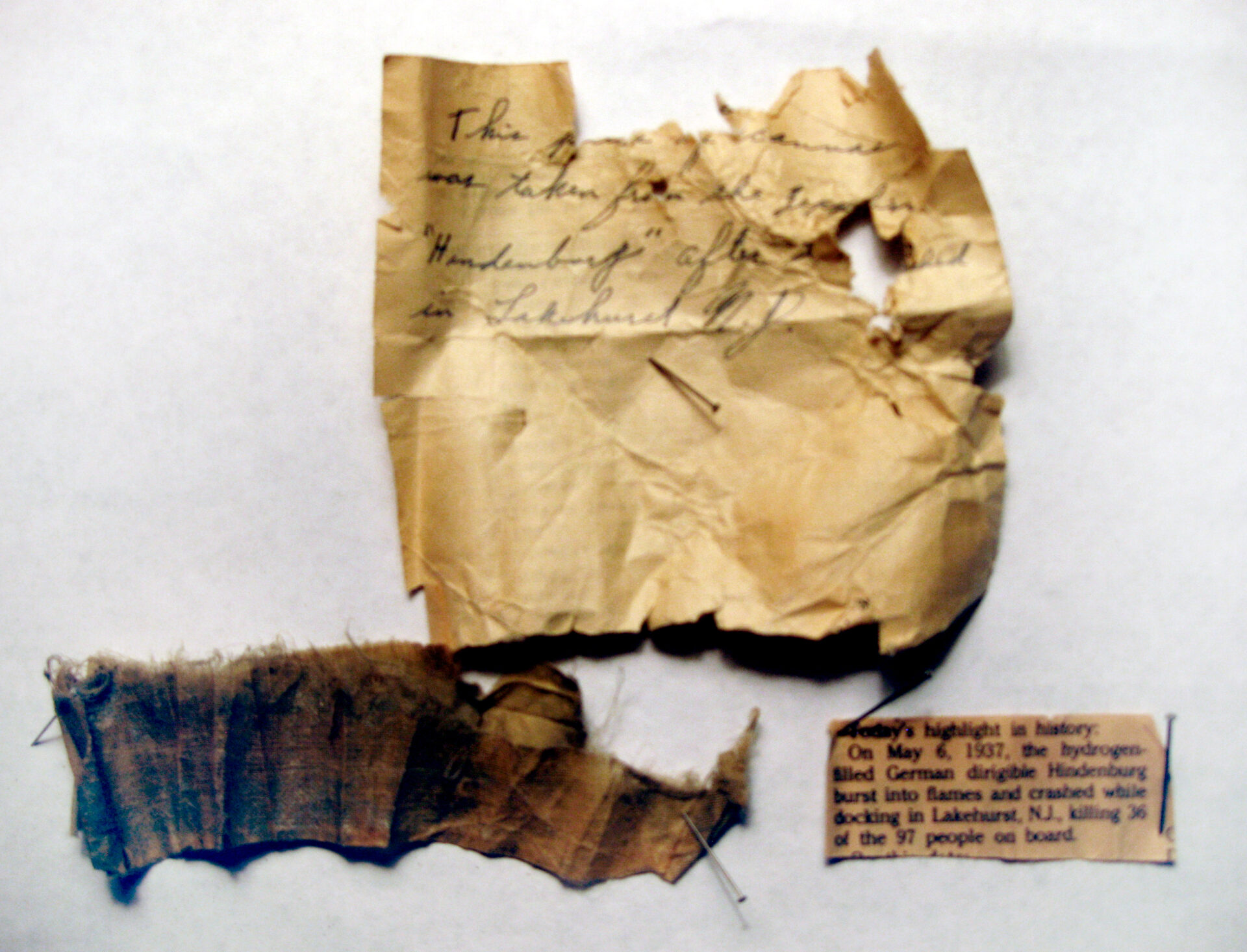 Photo caption:  Fragment of the fabric covering from the German dirigible Hindenburg which exploded on landing at Lakehurst, NJ, on May 6, 1937, after a trans-Atlantic crossing.  Nearly two-thirds of the passengers and crew survived the fiery crash, but the event ended the era of dirigibles for passenger service.  Bits of history come in all sizes.  This one has two notes to partially explain its significance.