The end of May brings memories of Memorial Day parades and other celebrations. In my 90 plus years, my family has attended or participated in numerous such events in Westminster that in many ways tell the story of almost a century of life here in Carroll County.

Perhaps the most notable in my lifetime was a parade in November 1932 to celebrate the election of Franklin D. Roosevelt as President. I was only a young child at the time, so do not recall this one, but I heard about it from my parents in subsequent years. The parade featured many floats adorned with the slogan “Happy Days are Here Again” and even had an elephant bringing up the rear, draped in black of course! Reviewing the parade were Governor Ritchie, Senator Tydings, and other VIPs–including my father, James M. Shriver, who was Chairman of the County’s Democratic Central Committee and President of the B.F. Shriver Co.

The earliest parade I remember was the Carroll County Centennial parade in 1937 which I watched on West Main Street. I attended the parade with my family, including my maternal grandfather Harry Brogden. We stood on the north side of East Main Street near the Rexall Drug Store, across the street from the old fire house. Main Street was packed!

I remember that the B.F. Shriver Co. had a float in the parade, and someone was riding Brownie, one of my father’s horses. That stuck in my mind because Brownie did not want to cross the railroad tracks! My father also participated in one of the pageants held after the parade, in the bowl down the hill from the College.

Fireworks were a regular part of July 4th celebrations, but not all of those were positive experiences. We watched the fireworks on July 4, 1939 from the flatbed of a truck or a wagon, parked along the park in downtown Westminster. In the middle of the show, one of the fireworks came down and exploded in the crowd right in front of us, badly injuring Larry Fink.

Larry’s father worked for the B.F. Shriver Co. at one point. Later, Larry was in my class at St. John’s School. Poor Larry sustained terrible injuries to his face from the fireworks and badly disfigured.

During World War II, my father participated in a number of parades in Westminster as Commander of the local company of “Minute Men,” a militia force called out by Governor O’Conor in March 1942 in the wake of Pearl Harbor. With so many National Guard forces deployed for the war, the Minute Men were intended to defend local communities in the event of an enemy invasion.

We attended many other parades and celebrations in the 1940s and 1950s, but after I married in 1955, I was out of town for most of the next 17 years as my husband Don’s Naval career took us all over the world. After we moved back to Carroll County in 1972, our involvement in Westminster parades continued.

In 1976, there was a huge Bicentennial celebration with a large parade. Several of my children dressed in colonial attire participated in that parade, two of them riding their horses down Main Street.

Memorial Day always involved a major parade, with some notable exceptions–like last year during the pandemic. I usually watched the Memorial Day Parade from a spot in front of the Historical Society of Carroll County, where volunteers would often be selling refreshments. As a Historical Society member, and later an employee and board member, there were always plenty of friends there during the parade.

When our children were younger, they paraded with other students from St. John’s School. One year, when I was regent of the Daughters of the American Revolution I rode in the Memorial Day Parade in a convertible. My children, then grandchildren, were in the Children of the American Revolution and so the kids for many years would be in a CAR float set up on a flatbed or hay wagon.

In one Memorial Day parade, I was in a horse-drawn carriage with my mother, daughter, and granddaughter, representing four generations of DAR.

In the 1970s, there also were parades up Main Street to mark the opening of the 4-H and FFA Fair at the Ag Center. Often my children were in those parades in various capacities, as all of the kids were in 4-H at one point or another.

When my son Sam was in the Maryland National Guard, he rode in the Memorial Day parade for several years as Commander of Battery A, 110th Field Artillery, which was located at the Evans Armory. The artillery unit would fire a cannon salute after the parade during the commemoration in the Westminster Cemetery.

No doubt many other families have had similar experiences participating in these important community events over multiple generations. As fleeting as such celebrations are, they serve to link our past to our future over the years.

Helen Shriver Riley is a longtime supporter of historic preservation and community volunteer. A native of Union Mills, Maryland, she lives at Fairhaven in Sykesville, Maryland. 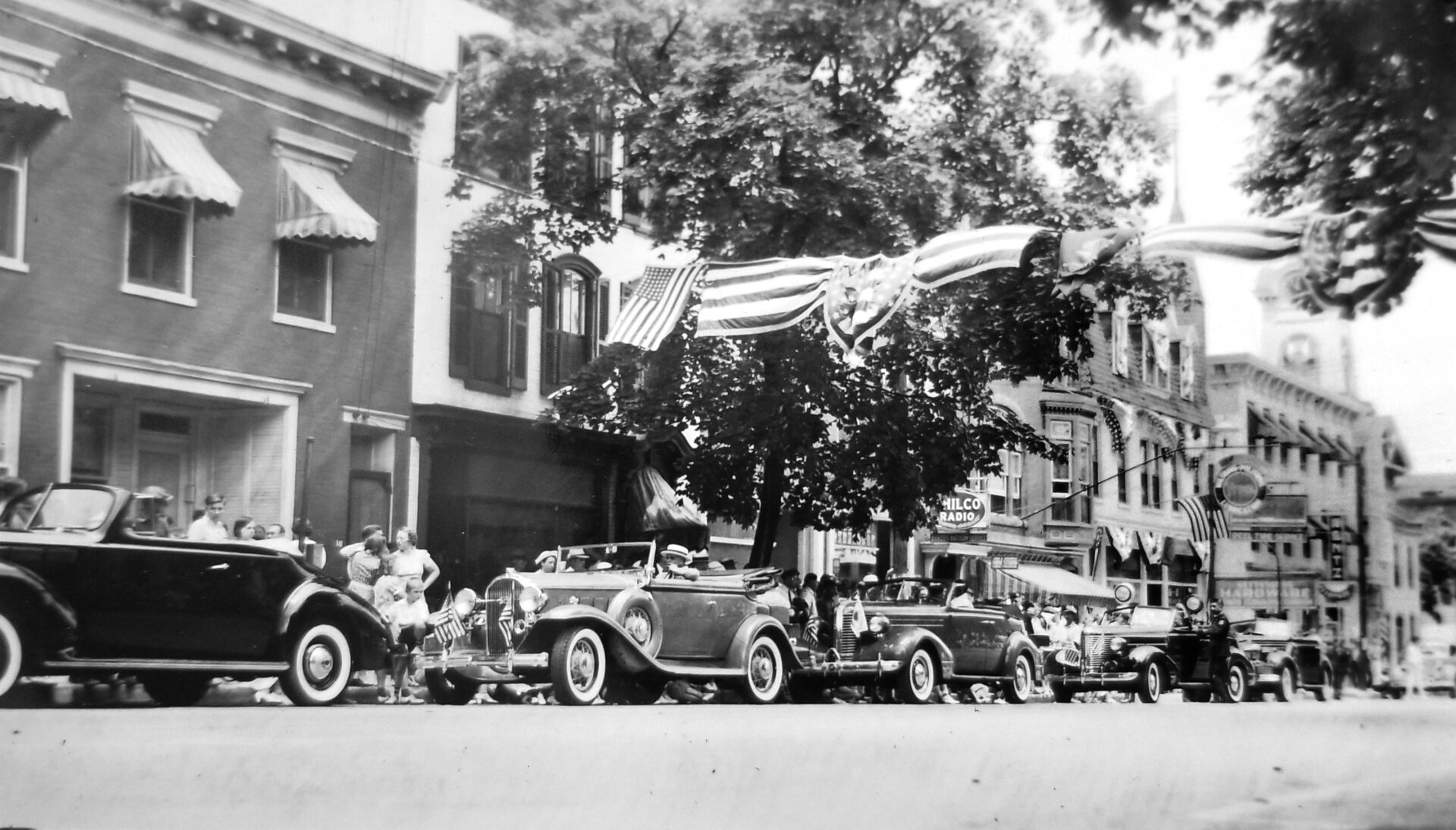 PHOTO 1:  Convertibles carrying dignitaries lined up in a parade along Baltimore Street in Gettysburg in the 1930s. (Shriver Family Collection).

PHOTO 2: Elizabeth Riley, waving, third from right, with several of her relatives in a float sponsored by the Children of the American Revolution in the 2002 Memorial Day Parade along East Main Street in Westminster. (Samuel M. Riley/Courtesy Photo) 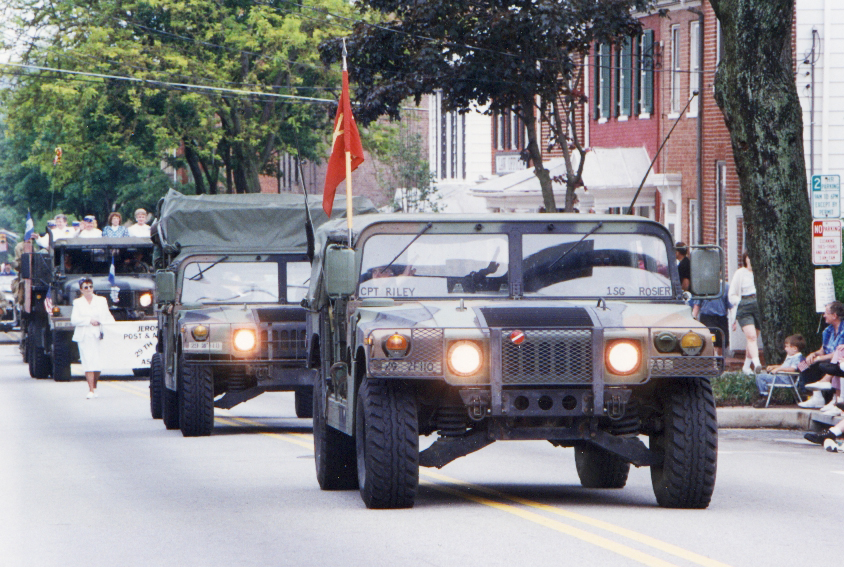 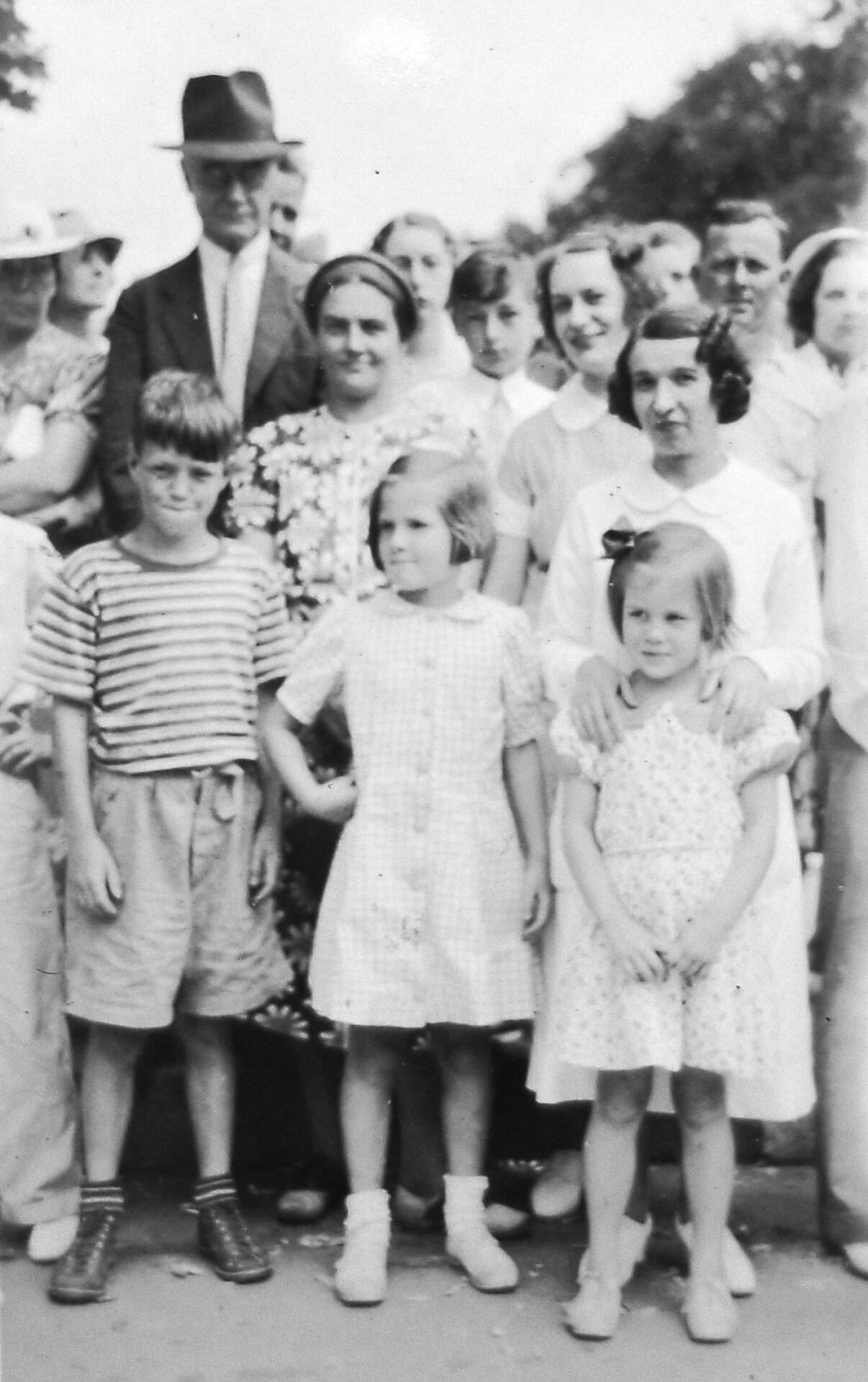 PHOTO 4:  Helen Shriver Riley, then Helen Shriver, center front, stands in a crowd with members of her family at the 1937 Centennial Parade in Westminster. With Helen is her brother, James M. Shriver, Jr., front left, and her sister, Eleanor. Behind them are their mother, Helen Brogden Shriver and grandfather, Harry Brogden. (Shriver Family Collection).