Circus Arrival was Tradition in Rural Areas Like Carroll

It wasn’t so long ago that summer meant the arrival of a circus in Carroll County. That tradition seems to have disappeared, but the origins of visiting animal acts and exotic attractions go back a long way in rural areas like ours.

The diary kept by Jacob Engelbrecht of Frederick County during the 19th century reveals some of the entertainment that passed through his area, and very likely ours as well. In July 1822 he noted, “I this day saw at Mrs. Shaffer’s Tavern an Exhibition of animals consisting of two camels (male & female), one Lion, one Bear, one ape, and two monkies.” The price for admission was 25 cents. On the previous evening, Engelbrecht saw “wonderful feats of agility performed by Master Dan’l Munich of York County, Pa, aged about 17 years. They surpassed any thing I ever saw up to this day.”

Later that year, three “tight waggons” passed up a Frederick street to Kolb’s Tavern and Engelbrecht surmised “from their appearance they contain live animals for exhibition.” In December 1823 he reported “I just now saw at Mr. Stuchbury’s – a camel, a S. American Tiger, a S. A. lama, an Ichnuman of Egypt [a mongoose] – and that’s all.” Admittance to this eclectic group of animals was 12 ½ cents.

By the 1820s central Maryland was crisscrossed by many roads. Entertainers, or anyone exhibiting animals like the ones mentioned above would likely stop at taverns along routes from Baltimore westward, spend a day or two, and move on to the next stop. Advanced advertising wasn’t possible for this kind of entertainment, so exhibitors needed to stay long enough for word of mouth to spread. Was this a lucrative business? Very likely it was because admission fees of 25 cents or even 12 ½ cents per person represented a lot of potential income at the time. Tavern keepers could also benefit from more business, so perhaps offered room, board, and stabling to the exhibitors.

One very odd attraction in Frederick City was a night-blooming cactus belonging to Jacob Houck of nearby New Market. Houck exhibited his cactus on two consecutive nights. Visitors could see it come into bloom about 6 p.m. and reach its peak at 10 p.m. Engelbrecht described it as a native plant of East India that resembled “a whole raft of cucumbers – one growing out of the other.” Word spread that Houck cleared “between 60 & 70 dollars,” and was offered 300 dollars for the plant. Earnings like that indicate exhibits of exotic animals might be equally lucrative.

Other attractions Engelbrecht mentioned included a “sea tiger” caught in Maryland’s Elk River. “It is a sea animal having a head something like a Dog – two fins in front where the fore legs ought to be, and two more fins very near the tail which is about 8 inches long. It weighs 170 pounds and is very plump.” Surely this must have been a seal captured when it ventured to the head of the Chesapeake Bay. On another occasion, a 7’4” Irish giant named Magee appeared at Mathias Bartgiss’ tavern in Frederick. Admission to see him was 25 cents; children were half price.

In the summer of 1880 Westminster hosted a very spectacular form of entertainment – Professor E. Hamilton’s Great New York Circus and Gold Band. A free street parade featured the band and a chance to see the performers before the shows began. There were two performances in a tent 80 feet in height featuring horseback riders and an “iron-jawed lady.” The advertisement suggests there were trained tigers and lions as well. Nothing quite like it returned to this area for many years.

Union Bridge residents had a chance to see Prof. White’s circus in 1896 in tents set up near the railroad station, but it appears the entertainment was chiefly “very intelligent dogs.” Nevertheless, between 500 and 600 people came to see the performances before the group moved on to Thurmont.

As time rolled by, circus-style entertainment was frequently mentioned in Carroll County as well as in neighboring areas such as Frederick, Hanover, and Baltimore. In 1915 the Frederick County Fair offered more than its usual agricultural displays and Carroll Countians could take advantage of reduced rates on trains to attend. The Carroll County fairs of 1939 and 1941 included magicians, juggling, “Callender’s bears and wild goats jumping, rolling and dancing,” a troupe of highly-trained ponies, dogs, and a high pole act.

Local families anxious for the ultimate in circus entertainment could drive or take the train to Baltimore to see the world-famous Ringling Bros. and Barnum and Bailey Circus that visited the city for many decades. Most of us remember seeing the parade of elephants along Pratt Street after they got off the train. It was a great advertisement on every TV station.

In June 2007 the Carroll County Times featured an article on the Kelly Miller Circus which arrived for one day’s worth of performances.

“Kelly Miller Circus crew made over the Carroll County Agricultural Center in Westminster, overflowing the wide-open space with colorful tents, exotic animals and performances. At 7:30 a.m. the day begins with the crew setting up the big top. With the help of one of the three elephants, the beams are pulled into place and the big top rises. The arena is then set up with stands and the main ring is put in place. Normally, everything is set up by 11 a.m.

One of the show’s main attractions are the animals: elephants, a llama, ponies and a camel. The animals arrive around 7:30 a.m. In the early afternoon, the elephants are washed to get them ready for the rides starting at 3:30 p.m. In addition to riding elephants, children can ride the camel and ponies. Other activities include face painting, a snake exhibit and moon bounce. The rides and activities cost between $1 and $5. [Prices for the actual show ranged from $5-$6 for children to $9-$12 for adults.]

The performance part of the day starts at the 4:30 show and features a contortionist, hand balancing act, and a group of gymnasts doing tricks with bungee cords…. The animals join the performers in the center ring.”

A second show began at 7:30 p.m., ended by 9:30, and the crew had everything packed up in about an hour. The following day, in another small town, the whole process began once more. An internet search revealed the Kelly Miller Circus was still performing in Pennsylvania as late as 2019 but with no animals in the show.

Today circus-style entertainment is available on television or by attending live performances such as Cirque du Soleil, although animals are not included in that. Ringling Bros. and Barnum and Bailey Circus folded its tents and retired its animals in 2017 after more than 130 years of performances. Perhaps some small circuses still survive and visit communities such as ours, although they have not been here recently. 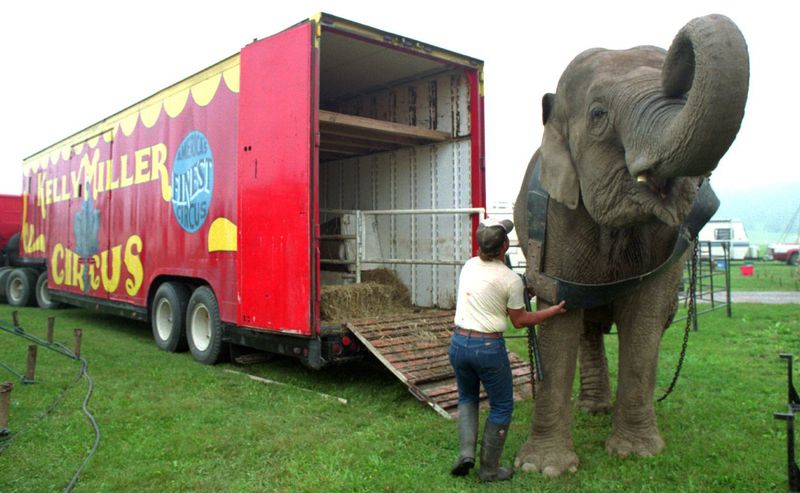 Image 1- Wolfgang Bruno the elephant trainer of the Kelly Miller circus gets “Viola” ready to help raise the three ring big top tent for a performance in Westminster in 1993. The Kelly Miller Circus made annual trips to Carroll County, often on the grounds of the Agriculture Center, for many years. (Lloyd Fox)

Image 2 – Credit American Sentinel – Caption: One of the earliest large circuses to arrive in Carroll County was this one during the summer of 1880.

Image 3 – Credit Carroll County Times – The Carson and Barnes Circus visited Westminster in 1978 for two performances in tents erected at the Ag Center – the usual location for most circuses that came to town.