Living in the twenty-first century, we are so lucky to have access to powerful medicines, to hospitals with well-trained doctors, to ambulances and medevac helicopters carrying medical technicians and to other sources of help when emergencies arise at home, at work or on the highways.  Not so just a century ago as the following story illustrates.  Unfortunately, a similar accident could happen today with the same sad results.

On July 31, 1902, Edward Trite, the twenty-year-old son of Peter Trite who lived about a mile from McKinstry’s Mill in western Carroll County, began cleaning out the 60 foot-deep well on his family’s property.  Knowing poisonous fumes could be present in the well, he first lowered a candle.  When it continued to burn, he descended in a large bucket which would also be used to remove the sediment.  After one bucket-load of debris was hauled out, Edward called to his helpers on the surface to quickly send the bucket back down as he felt himself being overcome by noxious fumes.

Although he was able to climb into the bucket, he must have lost consciousness as it was being raised and he toppled nearly twenty-five feet back to the bottom of the well which contained four feet of standing water.  Quickly, his nineteen year-old twin brothers, Samuel and Joseph, were lowered into the well and succeeded in putting the injured Edward back in the bucket and having him hoisted to the surface.  However, by the time the bucket was again lowered, “both brothers were so overcome by the gas that neither was able to get into it.  No other help was at hand, and by the time assistance was summoned it was too late.”

According to a report in the American Sentinel, “news of the accident spread rapidly over the country, and nearly a hundred and fifty persons assembled at the scene.  It was some time, however, before anyone would venture to undertake to rescue the brothers in the event of their being alive, or recover their bodies if dead.”

Ultimately, a brave soul in the crowd, identified only as “a Mr. Wilson,” volunteered for the task and was lowered into the well.  He was able to tie ropes around the lifeless bodies of the brothers so they could be brought to the surface and was successfully raised himself, apparently with no ill effects.

Pipe Creek Church of the Brethren Cemetery is the site of a monument which the Trites erected to their lost sons.  It reads, “Joseph & Samuel, Children of Peter & Margaret Ann Trite, Born December 2, 1882, Died July 31, 1902, Aged 19 years, 7 months and 29 days.  Lost their lives in the well.  At rest.”  The Trite family had thirteen children, but the loss in one day of two healthy, hearty sons, and the severe injury to a third son, brought deep sympathy from everyone in the surrounding area.

A physician who examined Edward Trite believed the gas he inhaled would not be fatal, but at the time the accident was reported in the newspaper, no one knew whether the young man would recover from the injuries he had suffered as he fell out of the bucket and back down the well.  Anxious to know whether he survived or succumbed to those injuries, I checked the 1898 – 1910 death records available online through the Maryland State Archives and did not find him listed.  But this tragic tale still holds a bit of mystery because he doesn’t appear in the 1910 or 1920 census records either living independently or with his parents.  What became of Edward? 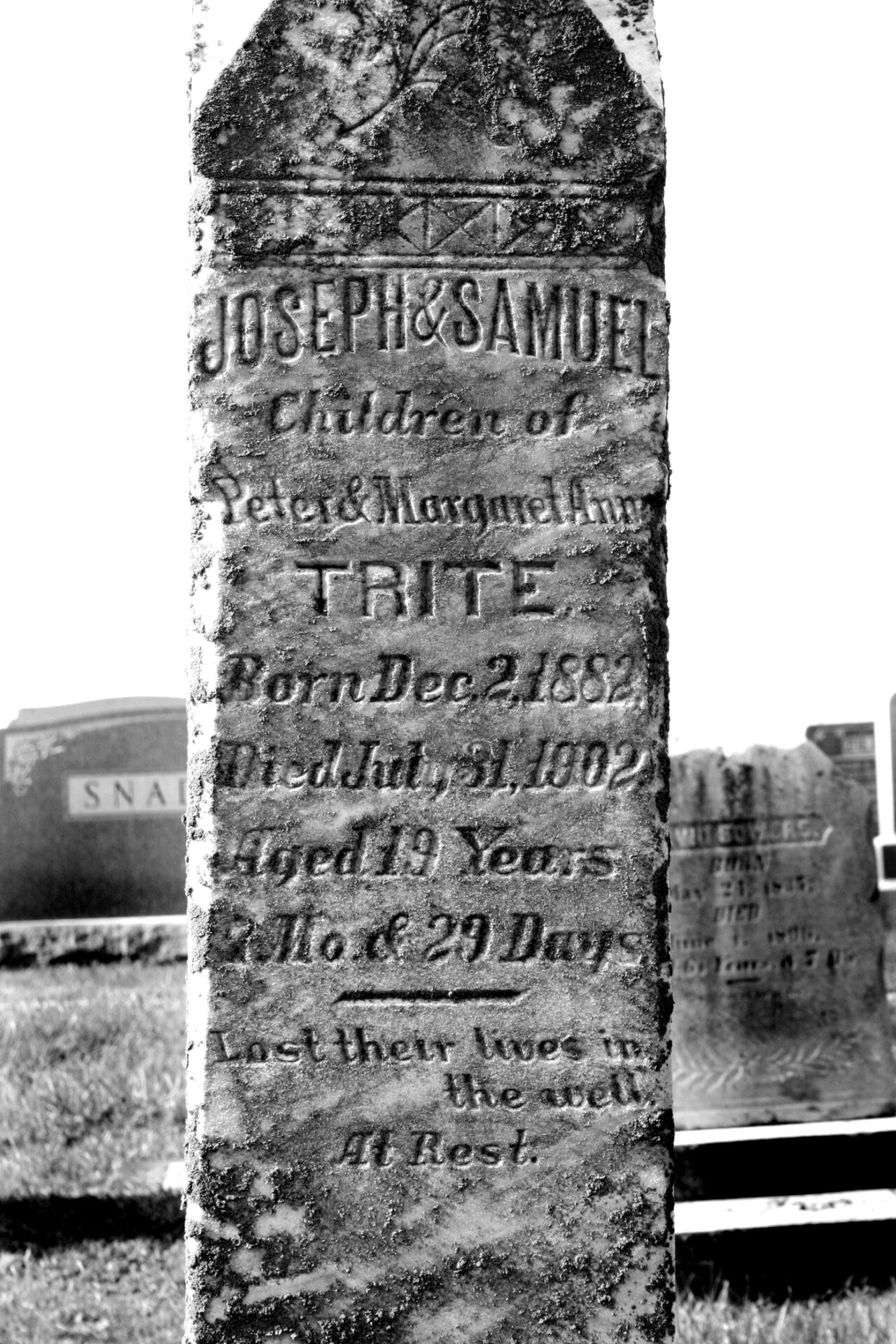 Photo caption: This gravestone of Joseph and Samuel Trite at Pipe Creek Church of the Brethren Cemetery only hints at the tragic deaths of the twin brothers in 1902.