Missourian Reconnects to Roots in Carroll

Why does a fifth generation Missourian who has always lived in Missouri have a great interest in the history of Carroll County, Maryland?

It all began in 1991 when I decided to see for myself the stone house built about 1793 near New Windsor, Maryland by my great-grandmother’s great-grandfather, Peter Baile (1747-1829). He had immigrated to Maryland as a boy and became a farmer with 300 acres of land at what is now Bowersox Road near New Windsor.

My own Baile ancestors left Carroll County about 1850, relocating to Preble County, Ohio. In 1868, following the accidental death of my maternal great-great-grandfather, John Baile, his widow and her younger children relocated to a farm in Missouri near a county-seat town east of Kansas City.

In 1918, when my mother was 17 years old, she traveled to Carroll County with her parents and grandparents. They visited the home of a banker in New Windsor, Nathan Haines Baile, where they signed his guest register. They then drove to the stone farmhouse built by Peter Baile. My mother took a Kodak picture of the two-story and attic stone house. She saw that a former bedroom window on the second floor had been boarded up because a daughter of Peter Baile angered him when she climbed through the window and eloped. At least that is the family story.

For four generations none of my ancestors had lived in Carroll County, so I dialed the information operator in Westminster. The first person I reached was Mrs. Ruth F. Baile in New Windsor. I told her why I was calling and she graciously offered to meet with my wife and me when we visited Carroll County a few weeks later.

Ruth Baile first took us to the home of Sarah Jane Baile in New Windsor, my contemporary. She was living in the former home of her grandfather, Nathan Haines Baile, the banker whose guest register my mother had signed seventy-three years before. We then walked down Main Street to the former Dielman Inn where Julia Roop Cairns, also a Baile descendant, was living in an apartment. We were joined by Mildred Devilbiss Hessen, another Baile descendant.

We drove out into the countryside and soon reached Bowersox Road and the stone house built by Peter Baile. The physician and his wife who had recently bought the house with its acreage cordially invited us in to see the remodeling then underway. They called our attention to the original door hinges of iron, probably fashioned by Peter who was also a blacksmith and had a smithy near the house.

The couple’s two young children then led the way through a grove of trees some distance from the house to show us the family cemetery begun by Peter Baile when his wife, Catherine Haines Baile, died in 1819 at age sixty-eight. Rough stones less than waist high formed a wall around the cemetery. Some of the headstones were still in place, but others lay scattered among the weeds, brush, and tree sprouts that had taken over the site.

Peter Baile’s headstone was recognizable, as was the stone for Catherine. The last burial had occurred in 1876, one hundred years after the signing of the Declaration of Independence. Excited by what we had found, I said to my wife, “I am going to restore this cemetery!” Over the next two years, with the extraordinary help of the four ladies in New Windsor and many others, we did just that. Nearly a hundred other Baile descendants joined us in 1993 for a rededication.

Byron Christopher Shutz, a retired businessman from Kansas City, MO, has written extensively about his family’s history and maintains contact with Baile relatives in Carroll County. 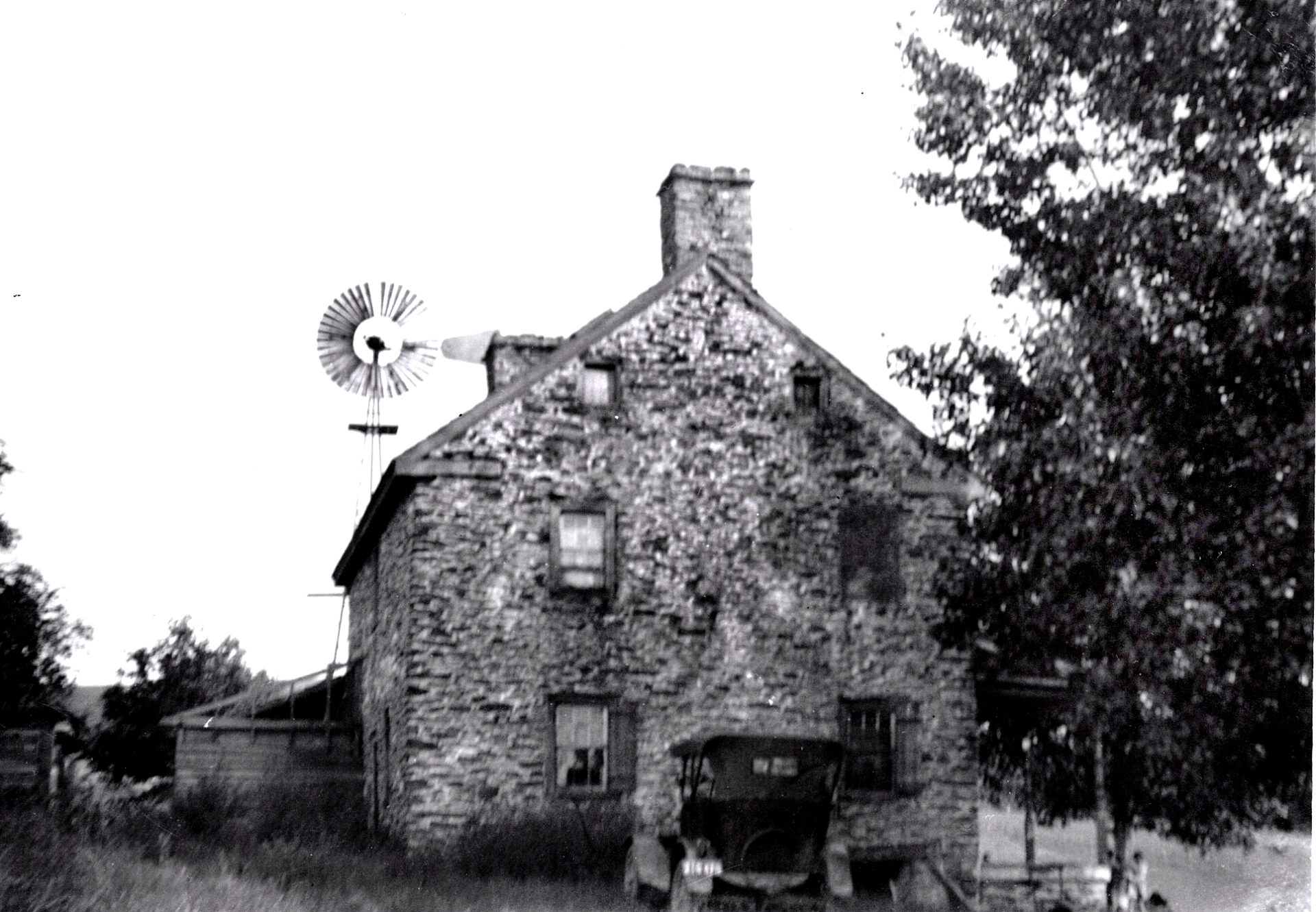 Photo caption: The Peter Baile house, built circa 1793 by Peter and two sons, appears in a photo taken when it was already over 100 years old. Courtesy of Julia Roop Cairns