Who can resist reading a newspaper article entitled “Corn Hooch Found Near Eldersburg.”  From time to time, I’ve commented on the fun of reading old papers, not just for their news, but for how it is written.  The following article appeared in the May 30, 1924, Democratic Advocate when Prohibition was in effect in the U.S.  The writer was Ira Barnes from Freedom, near present-day Eldersburg.

“Not very many days ago, Harry Kohler, a well-known farmer of Freedom district, while doing some chores upon his farm, accidentally discovered a considerable amount of corn hooch securely inclosed within glass jar containers and concealed upon his premises.  Mr. Kohler being a consistent member of the church as well as a strictly conscientious prohibitionist, was so severely shocked and horrified at the discovery of such unmitigated impudence, that for a few moments he was, so to speak, mentally paralyzed.  But looking around, he observed, near-by, a very large ground-hog excavation; quickly regaining his normal equipoise he strenuously seized the accursed destroyer of health, homes, happiness and harmony and forthwith dumped the contents of the jars, one by one, into the secluded retreat of this elusive animal.

“The next night following this eventful discovery, a lone wanderer traveling down Morgan Run Valley, was greatly surprised to observe by the light of the moon about a dozen ground-hogs engaged in a disgraceful tango, bunny-hug and turkey trot to the accompaniment of jazz music, furnished by a frog orchestra from an adjacent morass.  A large number of sober animals ranged around viewing the performance were so completely scandalized at the affair that they were compelled to bow their heads in shame, excepting a few old skunks, who had been thoughtful enough to bring along their shock-absorbers.  The potent influence of this illicit hooch upon the denizens of the forest speaks very strongly for the ability of our scoff law distillers, and doubtless, will be instrumental in the near future, of bringing them a much larger and more remunerative trade.

“Mr. Kohler retained a small portion of his discovery as evidence, which he gave in charge of Mr. Frank Ely, our local, brave and energetic prohibition agent, for the purpose of ascertaining its true alcoholic content; either by personal imbition or labratorial test.  It appears to be an established fact that since the enactment of the 18th Amendment more confiscated alcoholic evidence is imbibed by prohibition officers than ever was absorbed by all the old soaks and rummies combined for a similar period prior to prohibition…”

While Carroll County had voted to be “dry” several years before the Eighteenth Amendment was passed in 1919, not everyone obeyed the law and some individuals, like Ira Barnes, enjoyed poking fun at it and its enforcers.  Even Maryland’s governor at the time, Albert Ritchie, felt Prohibition was an infringement of personal rights and his Attorney General didn’t promote enforcement of the law by the police.

The Eighteenth Amendment, which prohibited the “…manufacture, sale, or transportation of intoxicating liquors within, the importation thereof into, or the exportation thereof from the United States,” was repealed in 1933. 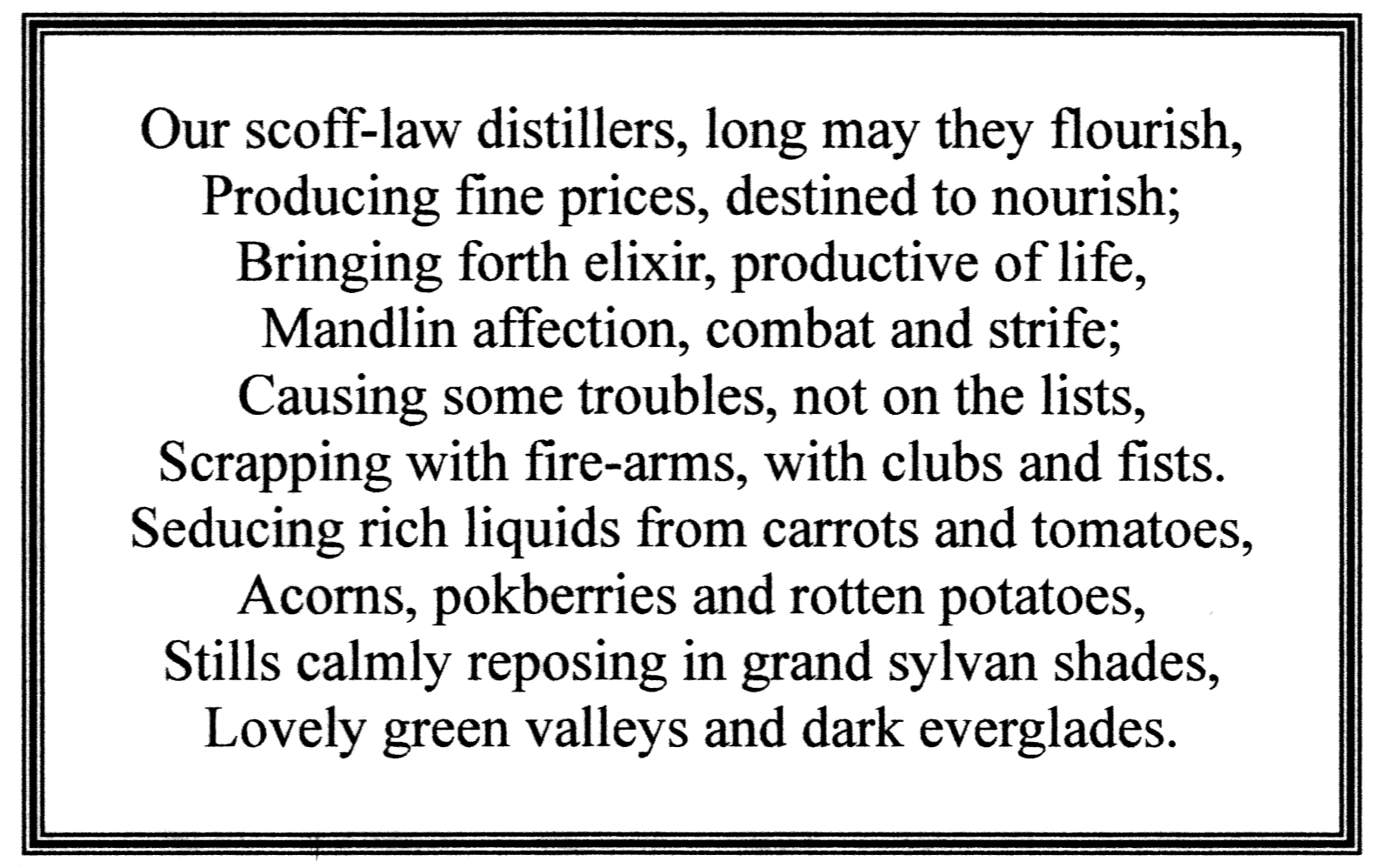 Photo caption: This amusing verse, reproduced exactly as it appeared in a 1924 Carroll County newspaper, accompanied an article on the discovery of bootleg corn whiskey near Eldersburg.