The following poem, written by Mary B. Shellman in 1876, commemorates the long life of Nicholas Paroway, born into slavery in Baltimore in 1766.  For much of his life, however, he was a respected resident of Union Street in Westminster, and one of his sons served in the Civil War.  Whether he achieved his freedom as a result of the emancipation of Maryland’s slaves on November 1, 1864 or before is unknown.

Toll the bell softly and toll the bell slow.
The boat is crossing the silvery tide;
And the old man’s life is ebbing low,
Soon he will land on the other side.

The light in the cabin is growing dim,
And the old wife kneels with bended head;
Murmuring a prayer, “Lord take me too,
And number us both with the silent dead.”

Old Nick was a slave of African birth,
Born one hundred and ten years ago;
He has passed the Summer and Autumn of life,
And is bending beneath the winter’s snow.

He saw this last Century ushered in,
With all its trials, and struggles and woe;
He saw our patriot fathers stand,
With bleeding feet in the blood stained snow.

He saw the struggle begin and end,
And heard the shout which the freemen gave
But he knew not then of Liberty,
For poor old Nick was a negro slave.

But years rolled by. The Republic grew,
And exiles flock to the freeman’s land;
And one by one in the arms of death,
Rested the little patriot band.

But with the shout of the freemen came
The iron clank of slavery’s chain,
And the dark browed child of Afric birth,
Toiled hard for freedom, but in vain.

At length a war cloud dark and drear,
Burst over the land with furious vim;
But in the dark that shadowed us then,
The slave saw sunshine breaking for him.

And Lincoln so noble, and grand and brave,
Dared the furious, angry blast.
And stretching his hand in the darkness there,
He broke the chains of the slave at last.

And slavery’s curse was all wiped out,
And the black cloud changed to sunshine then;
And oh, what a shout of gladness came,
From the lips of a million free made men.

And the old man stood with bended head,
And tears of joy rolled down his cheek;
As he breathed the prayer of gratitude,
His trembling lips refused to speak.

“Lord let me live yet a little while,
And add, to the blessings already sent,
The crowning joy the freedman craves,
To cast my vote for president.”

And there at the ballot with tearful eye,
And trembling hand his vote was cast;
And he breathed a prayer of thankfulness,
For joy that seemed too great to last.

And proud may you be, oh, chieftain great!
Grant, the laurel crowned, loyal, true;
That the first proud vote the freedmen gave,
Was given so gladly and freely to you.

And the years rolled on with their ice and snow,
And their Summers of sun and showers;
And the old man slowly wended his way,
To the land of light and of flowers.

Once more he offered a heartfelt prayer,
That the Lord would lengthen his days,
That the last proud act of his long, long life,
Might be casting his vote for Hayes.

His prayer was granted, and happy and free,
He cast his vote with a freedman’s pride,
And the life boat bearing his weary soul,
Slowly crossed to the other side.

And stand with reverent, bended head,

For the boat has touched on the golden shore,

And the freedman sleeps with the silent dead. 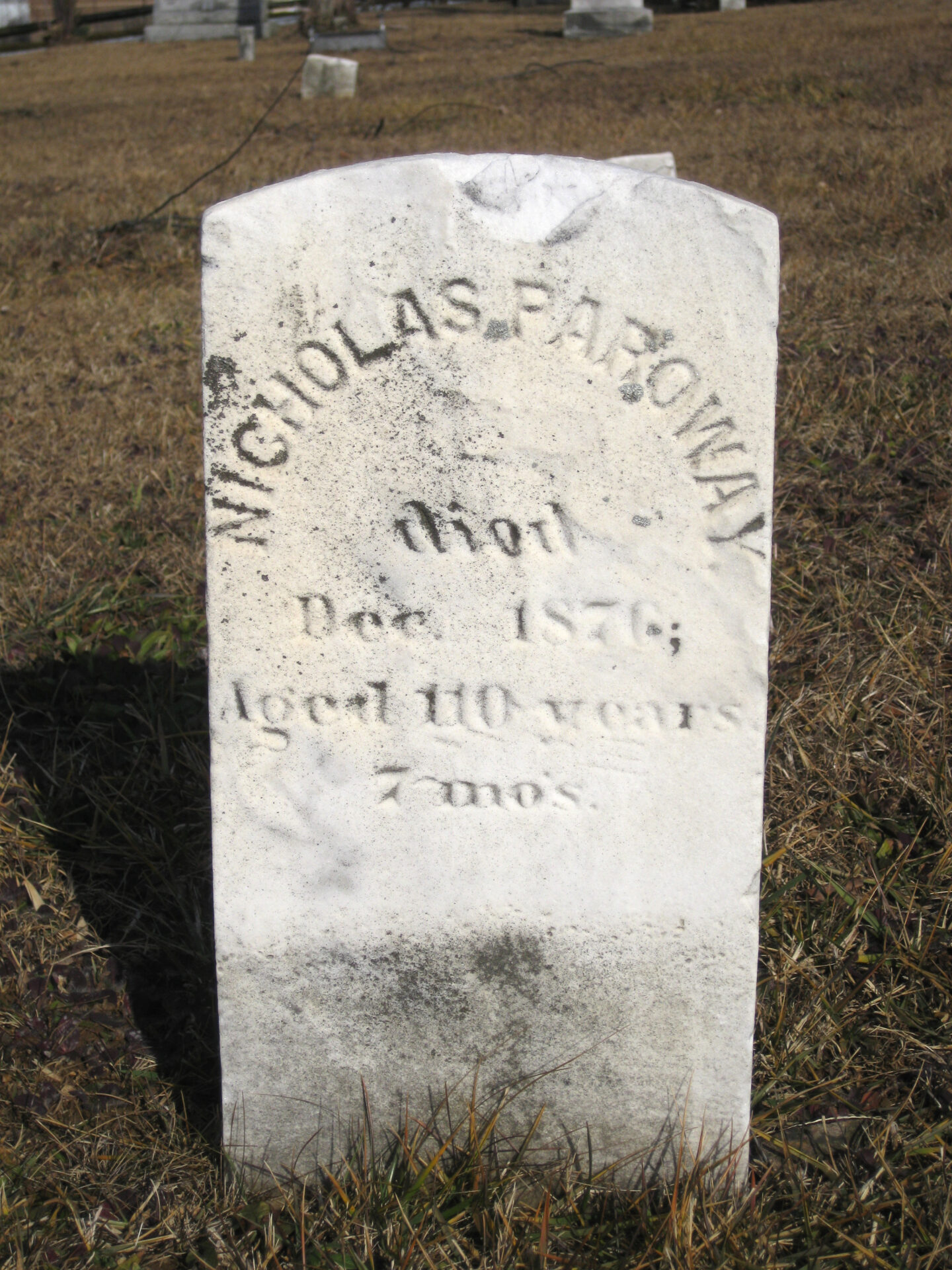 Photo caption:  Nicholas Paroway, the subject of the accompanying poem, was laid to rest in Ellsworth Cemetery, an historic black burial ground on the eastern edge of Westminster, following his death on December 8, 1876, at the remarkable age of 110.