While the Civil War left scars on the hearts and minds of many people in Carroll County, some stories had happy endings.

A headline in the Union Bridge newspaper of May 3, 1912, read “Death Recalls Pretty Romance of Many Years Ago.”   The article referred to the death of Mrs. Alexander A. C. Klancke in Germany.  Mrs. Klancke had been Mary Freeze, a Carroll County girl who was visiting her aunt, Julia A. Smith, in Westminster when soldiers of the 122 New York Infantry passed through on their way to Gettysburg.  According to the paper, two officers halted at the Smith residence and asked for water.  One of them was Alexander Klancke.  “As it was the dinner hour, Mrs. Smith hospitably invited the officers to dine with her family, an invitation which was accepted with alacrity, especially by Mr. Klancke who had promptly fallen in love with the pretty maiden from whose hand he had received the water.”   In June 1865, two years after their chance meeting, Mary and Alexander were married in Westminster’s Ascension Episcopal Church.

Tracing Klancke, a native of Germany, was challenging.  He apparently became an American citizen in 1859 in California, but what he was doing in a New York infantry regiment in June 1863 is a mystery.  In 1864 he lived in Washington, D. C., and in 1870 he and Samuel Smith, probably one of his wife’s relatives, owned a firm in Washington which handled patents.  When he applied for a passport in 1869 he listed his age as 33.

The couple soon moved to Germany where they spent the rest of their lives, although it appears Mary returned home for a visit in 1902.  The newspaper said Klancke “was a gentleman of wealth and noble family, one of his near relatives having married a German princess.  He lived but a few years and died childless.”  It’s difficult to know how accurate the details of this “pretty romance” were, but since Mary chose to remain in Germany rather than return to the U.S. after her husband’s death, she apparently found happiness.

Lizzie Shriver was another local girl whose heart was captured by a Union soldier.  John P. Sheahan, a native of northern Maine, encountered her as he passed through Westminster with the 1st Maine Cavalry on his way to Gettysburg.  He survived that battle and, in the spring of 1864, he joined a Maine infantry unit.  Lizzie sent him letters and packages while he was fighting in Virginia, but at some point he was captured and spent months as a prisoner of war before escaping early in 1865.  That August he returned to Westminster to marry her.

John and Lizzie lived in Carroll County for about eight years after their wedding.  According to the 1870 census, John practiced medicine, although when and where he received his medical training is unknown.  Later they and their two young sons moved to Maine to be near his aging parents.  Their love story ended with Lizzie’s death in 1892.  John sent her body back for burial in Westminster Cemetery, and he was buried beside her two years later. 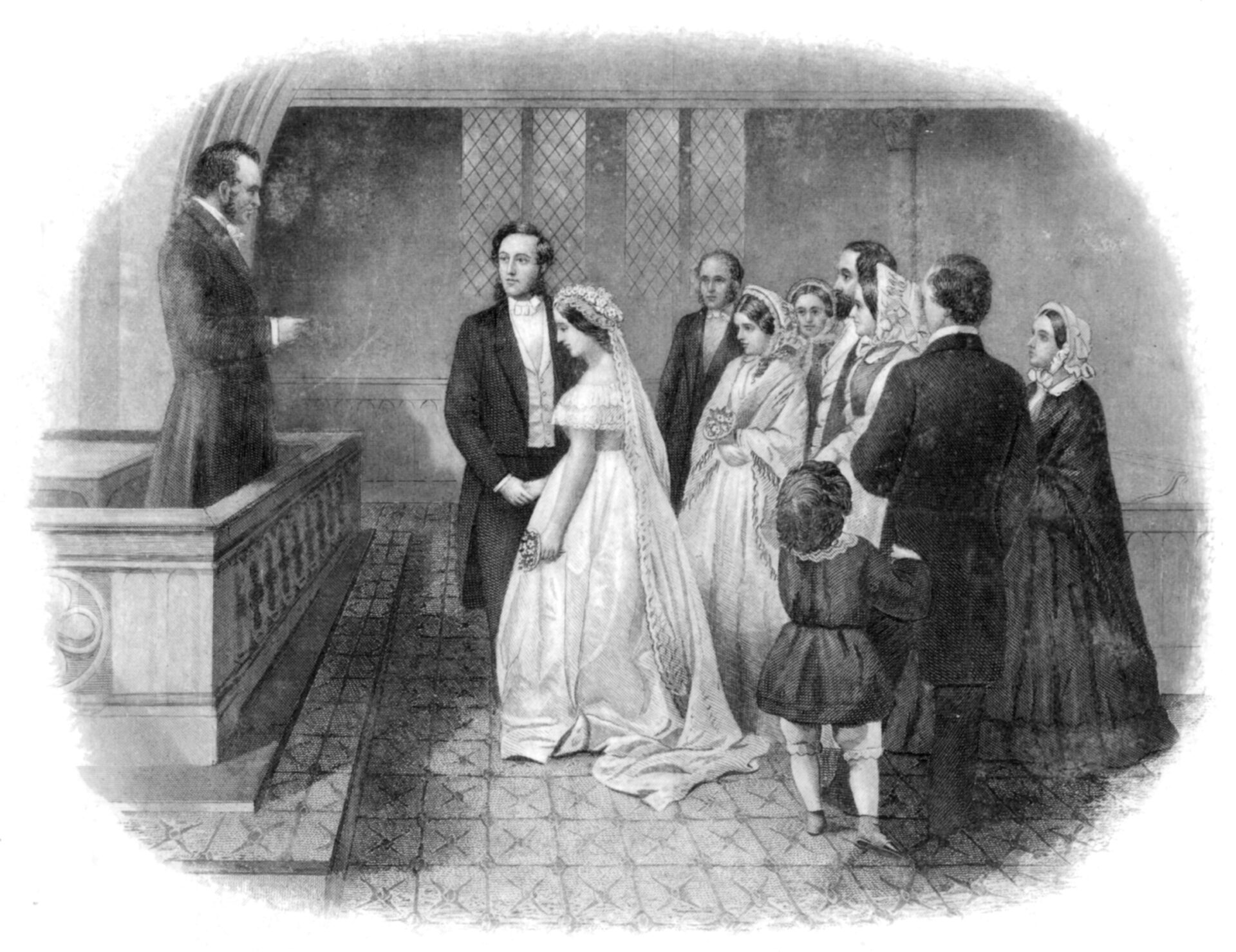 Picture caption: This illustration taken from an 1865 marriage certificate represents a typical wedding of the Civil War period.  Lizzie Shriver and John Sheahan’s wedding might have been somewhat similar.