The county was formed January 19, 1837, by action of Maryland’s General Assembly and fulfilled a 50-year quest. The first petition for creation of a new county between existing Baltimore and Frederick counties went before Maryland’s General Assembly in 1783 over the signatures of 12 citizens. Paca was suggested as the new county’s name after then-Governor William Paca. Between that first petition and 1837 several other proposals made their way to the legislature; all were rejected.

The formation of Carroll County was driven by logistics and politics. Some residents had to travel up to 40 miles east or west to conduct their business at a courthouse. A new county would also boost political power for the region since together Frederick and Baltimore made up one-fifth the population yet lacked adequate representation in the legislature.

Division of land was the most significant challenge facing those in favor of a new county. Some wanted it formed entirely out of Frederick County, others out of Baltimore County, while the third possibility was taking land out of both with Westminster as the county seat. Citizens were also concerned that formation of a new county might increase taxes according to an article that appeared in Westminster’s Carrolltonian.

In 1833, William Cost Johnson of the House of Delegates introduced a bill that provided borders, honored Charles Carroll, signer of the Declaration of Independence, and placed the county seat in Westminster. Although the bill passed, it required a vote of residents affected by the change.

Citizens in Frederick County approved the bill overwhelmingly, but those in Baltimore County did not. Questions arose regarding the legitimacy of the Baltimore votes because the bill was narrowly defeated. Another concern was whether the Maryland Constitution allowed the public to vote on legislation that had already been decided. Eventually, the House of Delegates determined no community confirmation was needed and passed the act creating Carroll County on January 16, 1837. The Senate passed it on January 19.

A week later Carroll held its first celebration in Westminster with a procession headed by the Manchester military band which arrived in a sled drawn by four horses. In contrast to the warm weather of some future celebrations, marchers in 1837 encountered plenty of snow as they made their way along Main Street to the Union Meeting House at the end of Church Street for music and prayers.

Join the Historical Society of Carroll County on Saturday, February 1st in Grace Hall, Grace Lutheran Church, 21 Carroll Street, Westminster, Maryland, from 2 pm – 4 pm to celebrate our 183rd Birthday! The featured speaker will be Burt Kummerow whose topic will be “George Washington and Maryland: A Lifelong Relationship that Helped Define a New Nation.”

Photo credit: Courtesy of the Historical Society of Carroll County 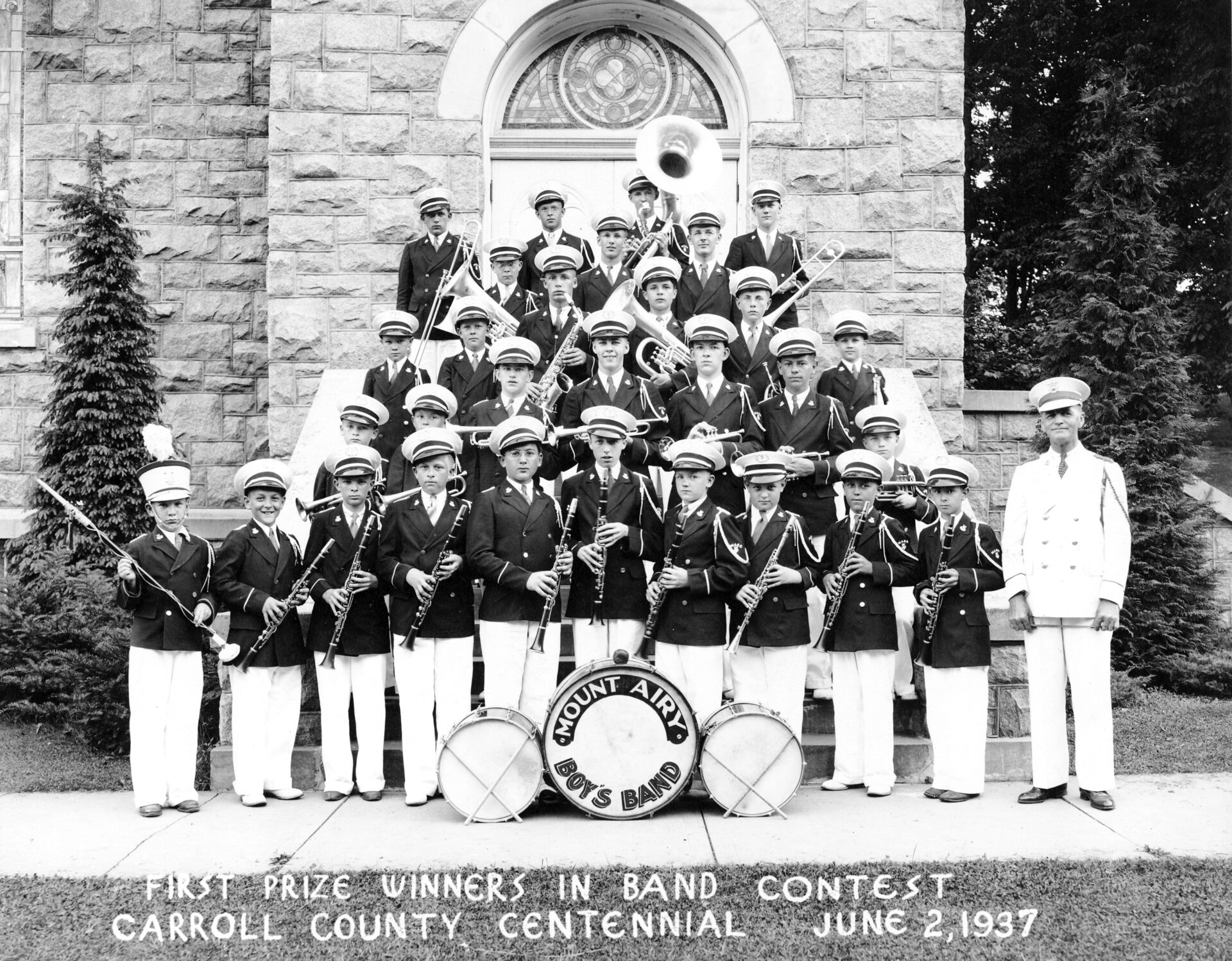 Photo Caption: Carroll County marked its centennial with a gala celebration from May 30 through June 3, 1937. June 2, 1937 featured a competition for Carroll County bands. Each entry played a march and an overture for the judges. The Mount Airy Boys Band took home the first place prize of thirty dollars.