Between commemorating the bicentennial of the War of 1812 and the sesquicentennial of the Battle of Gettysburg, local history enthusiasts have no shortage of places to visit and stories to learn.  During the coming month, events surrounding the Gettysburg Campaign of June-July 1863 will fill our newspapers, so let’s take a look at how Carroll County residents took part in the War of 1812.

As you can see from the accompanying photograph of Benjamin Bond’s memorial, men from this area (then part of either Frederick or Baltimore County) rose up to defend their country.  I’m not sure if any of them marched away to fight in the battles which took place along the Great Lakes and in Canada, but they turned out in huge numbers when the British invaded the Chesapeake, especially after the burning of Washington and the defeat at the Battle of Bladensburg in August 1814.

What, then, can we make of the military service of Private Jacob Hively of Manchester whose enlistment began August 8, 1813 and was to last 60 days?  Very specific information about Jacob exists – the fact that he was “on furlough from August the 25 until 29 inclusive” and that he was owed $7.48 for his 29 days of service between August 8 and September 10.  Did someone confuse the year 1813 with 1814?  What occurred in 1813 to call Jacob away from home a full year before the bombardment of Ft. McHenry and the Battle of North Point?

Residents of central Maryland like Jacob probably were aware that a British fleet was terrorizing communities along the shores of the Chesapeake during the summer of 1813 – burning and raiding in Cecil, Queen Anne’s, Kent, and Talbot counties.  Havre de Grace was put to the torch in May 1813; Georgetown (in Kent County) was also burned, and British troops landed in Queen Anne’s County on August 2.  The assaults on Maryland property were becoming more and more serious.  They undoubtedly were the reason that Jacob Hively enlisted as a member of Jameson’s Regiment of Maryland militia in late summer 1813.  If the British had launched an attack on Baltimore at that point, Maryland militiamen were prepared to meet them.  How successfully they could defend the city wouldn’t be tested for another twelve months.

A surprising number of Carroll County men actually served during the War of 1812, most of them during the August/September period of 1814 with which we are familiar.  Unfortunately, it’s hard to identify the participants because gravestones like Benjamin Bond’s are rare, but genealogists unearth information about their patriotic ancestors using the old militia rosters.  We know some of the soldiers gathered in southeastern Carroll County at a place called “The Forks” where the two branches of the Patapsco River met and then marched on to Baltimore.

Maybe some of you reading this column had an ancestor who shouldered arms.  Local men with names like Blizzard, Arbaugh, Farver, Gorsuch, Shipley, Buckingham, Barnhart, Frizzell, Hobbs, Fowble, Harman, Warfield, and Hesson joined militia companies and served between the end of July and the closing days of September 1814. 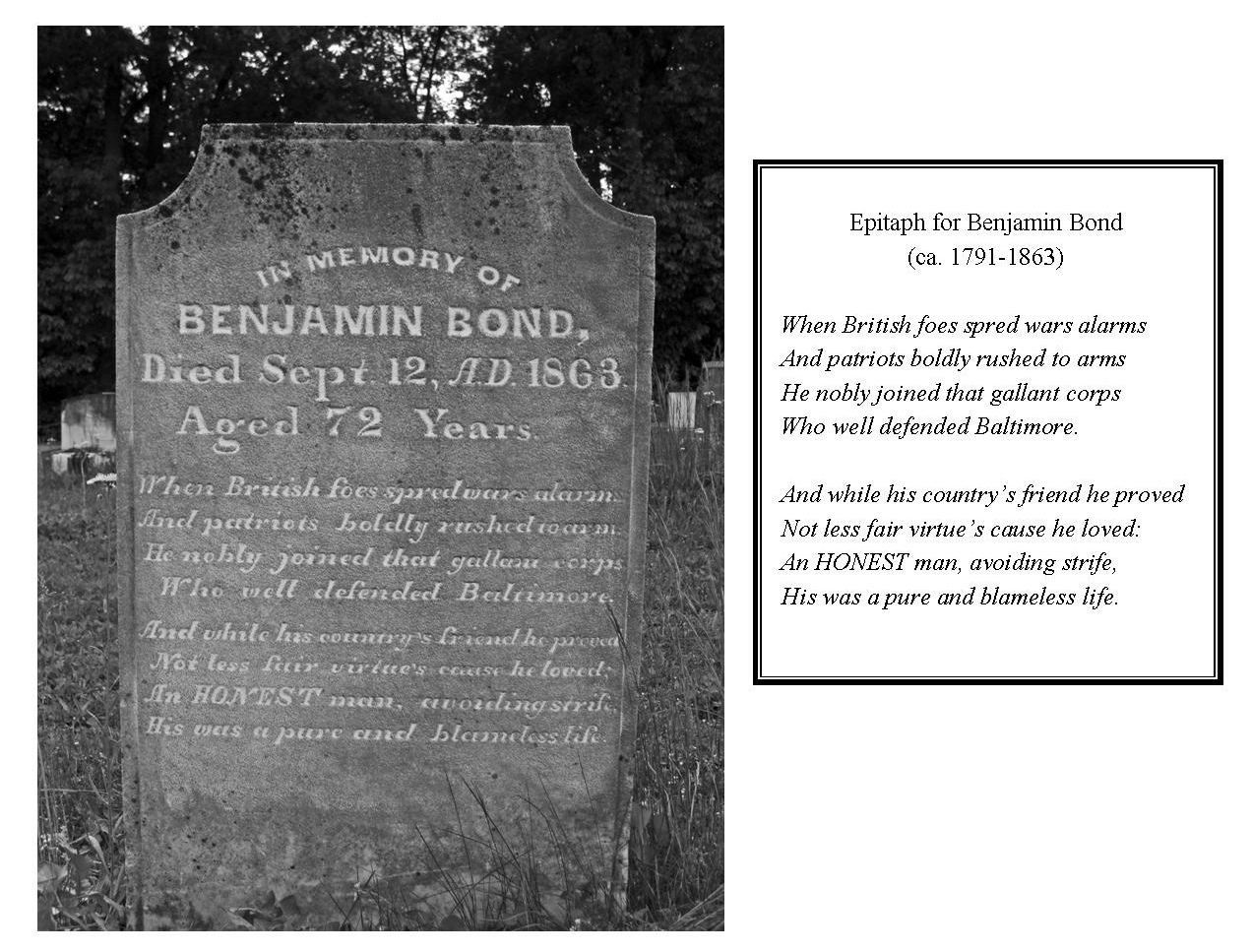 Photograph caption:  Benjamin Bond’s gravestone in Pipe Creek Church of the Brethren Cemetery bears testimony to his service during the War of 1812.  He was about 23 years old when he participated in the defense of Baltimore in September 1814.